Theatre Review: ‘Illyria Or What You Will’ at WSC Avant Bard 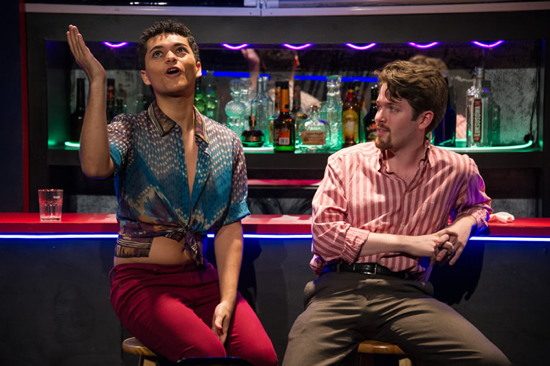 Montana Monardes (Sebastian), Adam Lemos (Antonio) in Illyria, or What You Will from WSC Avant Bard. Photo by C. Stanley Photography.

This Illyria, an adaptation of Shakespeare’s “Twelfth Night” by Jonelle Walker and Mitchell Hebert, is not set on the isle, but in a basement nightclub in the 1980s. Befitting the original’s tale of men and women masquerading as the opposite gender, in this club, the characters are straight, gay, bi, pansexual, a drag queen, and two women performing masculinity. It is a daring reconfiguration of Shakespeare.

Briefly, it is about love—finding love, accepting love, giving love, and being open to non-binary love. But first, all these searchers must come to Illyria. Viola washes up at Illyria, is taken under the wing of drag queen and singer Miss Fabian, emerges as Cesario, and takes a job with the club owner, Orsino. Orsino is desperately in love with Olivia, a rising star, who has taken a vow of chastity basically because of the death of her brother. Orsino sends Cesario to plead his case with Olivia. Faithfully, Cesario does so, even though they have fallen for Orsino. Meanwhile, Olivia’s cousin Toby and his friend Andrew are hitting the drugs and alcohol with gusto; Andrew was also rebuffed by Olivia. This hurts Maria, who is Olivia’s backup dancer and who loves Andrew. To add to the confusion, Cesario’s lost brother, Sebastian, is trying to get in the club with his in-the-closet friend, Antonio (a policeman in this production). A subplot involves Malvolio, Olivia’s manager, who riles Toby and Andrew and they vow revenge. Rounding out the players are Miss Fabian and Feste, the house DJ. Things do get sorted in the end, and it’s all done in a pretty brisk 90 minutes.

This production uses the entire theatre space; patrons at cocktail tables are right on stage and there are four mini-sets—the bar itself; Orsino’s office; Olivia’s apartment or dressing room; and another room with a sofa. In between the sets are shallow tiered seating. At times, because much of the action takes place among the tables, the sight lines from the tiers were slightly blocked, but this is not one of Shakespeare’s more subtle plays, so it was workable.

Montana Monardes as Sebastian (Viola/Cesario’s lost twin) and Adam Lemos as Antonio have a fun chemistry as the ersatz straight policeman and the gay club kid. The moment when Sebastian draws Antonio onto the dance floor and then swoops in and positions his hips to try to move more freely is a genuinely warm and funny moment. Lemos is delightfully tentative as a man facing his sexuality and his yearning to be with Sebastian is never overt; it is a subtle performance.

Miss Kitty Lelynx as Miss Fabian knows how to own a stage; few can stride better in high heels. She uses an air of brusqueness to cover her generous moments and is truly funny when the other denizens of Illyria impinge on her stage time with their shenanigans.

Dani Stoller plays Olivia and while no reason is ever given for her prolonged self-declared period of mourning, she does appear in the club to sing and to periodically hiss at Orsino. Her dawning affection for Cesario is charmingly girlish.

Jenna Rossman plays Andrew and Katie Gallagher is Toby and both provide comic relief in their portrayals of coke-sniffing, booze-swilling club kids. Frank Britton is a majestic DJ Feste; sadly, his character doesn’t have much to do. Emma Loughran Hebert is a winsome Maria, Christopher Henley’s Malvolio is an understated portrait of a Svengali-type who finally decides to let his inner drag queen out. As Orsino, Matthew Sparacino is irritated and determined in equal parts.

The show ends with a delightful twist to the love triangle, and that moment has a lot of energy. The night I saw it, the energy seemed muted and having an audience at the club tables didn’t seem to help. For a nightclub, there just wasn’t much action. But the set is distinctively rendered. Costume designer Kristen P Ahern outdid herself on Miss Fabian’s costumes; the rest are a mix of Miami Vice (Orsino) or Boy George.