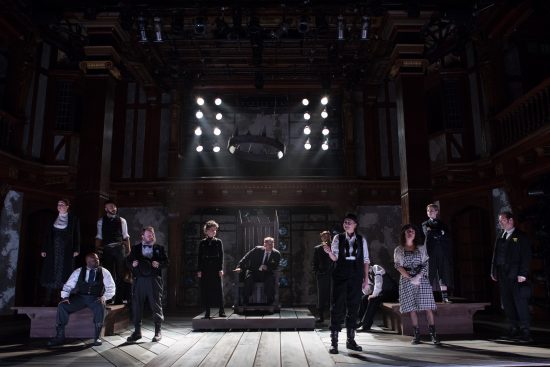 They say heavy is the head that wears the crown, but it’s even heavier when a rival nation and part of your own family see you as having usurped that crown. Power, family, loyalty, and greed are all examined in one of Shakespeare’s lesser performed plays, “King John,” playing now through December 2nd at the Folger Theatre.

…the Folger Theatre delivers another expertly crafted work of Shakespeare that, even though written hundreds of years ago, continues to resonate today.

Belonging to the “Historical” faction of Shakespeare’s canon, “King John” stands out as being the Bard’s earliest look at the monarchy and politics in Europe. While this may not be one of the more well-known plays of Shakespeare, King John is certainly a well known figure in popular culture. He is the infamous Prince John of the Robin Hood stories; the bumbling, villainous younger brother of Richard the Lionhearted. He has been portrayed on film multiple times, comedically (Richard Lewis in “Robin Hood, Men in Tights,”) dramatically (Oscar Isaac in 2010’s Robin Hood,) and even as an animated lion in Disney’s 1973 version of the Robin Hood legend. Beyond Robin Hood, John is generally regarded as the most despised of the British monarchs, and one of the only positive things attributed to his reign is the signing of the Magna Carta, which was only was done to prevent the open revolt of his lords against him. In fact, Winston Churchill once said that he was “the first king beholden to the law.” Shakespeare’s play doesn’t shy away from criticism of the much maligned royal, but takes pains to portray a more human side of the man as well.

While the Folger theater does a thorough job of setting up the play in the program, they obviously wanted to make sure that even audience members that sneak in at the last minute will know what’s going on. Their tactic for this is an incredibly entertaining one- the entire cast takes the stage and does an informative and comedic introduction to each of their characters. Not only is this intro an effective way to introduce the audience to the historical and political world of the play, but also helps them understand some of the motivations each of the characters has going into the play in an accessible and comedic way. It’s a fantastically effective 4th wall break.

As the play opens, John (Brian Dykstra) has seized the throne after the death of his much more beloved brother Richard, Coeur de Lion. With the support of his mother, the indomitable Eleanor of Aquitaine (Kate Goehring), John legitimizes a bastard son of Richard’s, Philip Faulconbridge (Kate Eastwood Norris) and creates a powerful and loyal ally. And John needs all of the allies he can get, since his other older brother’s widow Constance (Holly Twyford) has rallied the French King Philip (Howard W. Overshown) and his son the Dauphin (Akeem Davis) to her cause- that her son Arthur (Megan Graves) is the true king and John is a usurper. What follows are twists and turns as loyalty is tested, alliances are made and broken, and lives are lost.

In “King John,” the Folger Theatre delivers another expertly crafted work of Shakespeare that, even though written hundreds of years ago, continues to resonate today. Director Aaron Posner presents a humanizing look at a much maligned public figure, and provides a poignant commentary on flawed leaders and leadership in general. Another theme that is examined in this production is the idea of “Commodity.” Philip Faulconbridge references it by name in a monologue within the play, highlighting that it is a vice that few can escape, even royalty. It is one of our basest urges- a desperate greed, a selfish desire of self-promotion. In this play, Commodity consumes nearly all of the characters and comes with a high cost- family, trust, and ultimately several lives.

Dykstra is a compelling John; he is able to be simultaneously menacing and bumbling. There is a running gag where King John will make a kingly decree and then turn around and trip over his throne. While these moments are comedic, they are also humanizing to this character who is often portrayed as cartoonishly evil. Eastwood Norris also impresses as Faulconbridge, who emerges as the best representation of a protagonist in this piece. She is deftly able to switch from the funny moments to high drama with ease; her monologue where she decries humans’ obsession with Commodity, was highly affecting.

One impressive thing about this show is that it presented three incredibly strong yet flawed female characters. Goehring does justice to one of the shrewdest women in English history; the only thing she cares more about than her family, is the power that her family can bring her. Her relationship with her daughter-in-law Constance is so interesting because they both are fighting ferociously for their sons- they are just on different sides of the same issue. Twyford delivers an emotional performance, in turn fierce and morose as the fortunes of her son fluctuates. Alina Collins Maldonado also portrays John’s niece Blanche, who is essentially offered up as an olive branch to the French. She effectively reflects the conflict at being caught between her old family and new in the war of succession.

While the rest of the cast is all strong, there was a particularly compelling relationship between Arthur and his assigned captor, Hubert. Graves was incredibly realistic as a young boy, losing herself in the character even though she lamented playing a young boy yet again in her section of the introduction. She perfectly represented the innocence and studied air of a young prince trying desperately to please his mother and appear regal. Hubert, played by Elan Zafir, started off as a comedic figure, but quickly turned menacing when tasked with a terrible mission. He then showed great emotional depth in an intense scene where he had to make a choice between loyalty and conscience. Brian Reisman and Maboud Ebrahimzadeh both excel in multiple roles, and Overshown and Davis also impress as the father/son French royals.

The set is simple, yet effective (Andrew Cohen, Scenic Design) and the show features fantastic original music (Lindsay Jones). The costumes were a unique choice; they seemed like early 20th century designs, and were vaguely reminiscent of the costumes in Kenneth Branagh’s 1996 film adaptation of Hamlet. While all of them were excellent, one particularly amazing piece was the Duke of Austria’s resplendent coat, complete with an impressive mane of fur (Costume Design, Sarah Cubbage.) Perhaps my favorite moments of the piece were the war scenes; the lighting was highly inventive and transportive (Lighting Design by Max Dolittle.)

This production was incredibly nuanced, thought-provoking, and entertaining. This reviewer highly recommends checking out this rarely performed gem before it’s gone.

Running Time:  2 hours and 20 minutes and includes one 15 minute intermission.

Advisory: It includes some smoke effects and is recommended for audiences 14 and older.