Theatre Review: ‘Measure for Measure’ at The Kennedy Center 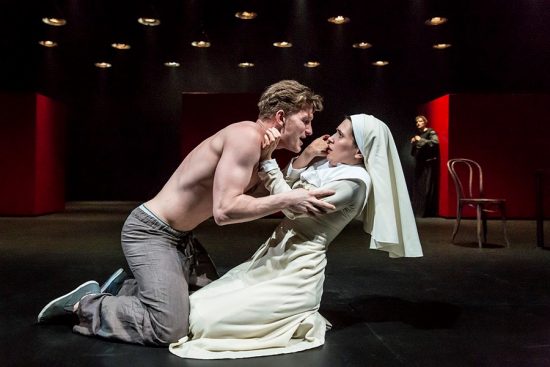 “My false o’erweighs your true.” Though Shakespeare wrote those words over 400 years ago, they could not be more relevant to our world today. In the wake of “fake news,” #metoo, and, most recently, the trauma exposed by the Kavanaugh hearings, this rarely performed piece is a treatise on the violence of men against women, and proves the old adage that “power corrupts, and absolute power corrupts absolutely.”

This show is the first entry in The Kennedy Center’s World Stages series. The Kennedy Center has shown a long commitment to presenting diverse and thought-provoking theatre from across the world, and this year is no different. Curated by Alicia Adams, this year’s World Stages series features shows from Latvia to Lebanon. This series continues its collaboration with the Sundance Institute Theatre Program and Georgetown University’s Laboratory for Global Performance and Politics, and new to the World Stages program this year is a series of discussions called “The Lab PerForum: A Series of Public Discussions and Workshops with Artists from The Kennedy Center’s World Stages.” The first performance is a unique and ominous presentation of Shakespeare’s moralistic “Measure for Measure,” presented entirely in Russian with subtitles.

…the cast come together to present a dynamic and avant-garde telling of a lesser known work of Shakespeare.

For those unfamiliar with one of Shakespeare’s lesser-performed plays, “Measure for Measure” takes place in Vienna, as the Duke (Alexander Arsentyev) decides to take a sabbatical. He leaves the city in the hands of a strict, moralistic judge, Angelo (Andrei Kuzichev). However, very quickly, Angelo decides to crack down on, what he sees as, a city in moralistic decay. Two of the first victims of this are Claudio (Petr Rykov) and his soon to be wife, Juliet (Anastasia Lebedeva,) for the crime of fornication. Claudio is condemned to die for his crime, and his friend Lucio (Alexander Feklistov) seeks out Claudio’s sister Isabella (Anna Vardevanian) to intervene on her brother’s behalf. Isabella is a novice at a nunnery, and Lucio hopes that her virtue will sway the moralistically fastidious Angelo.

However, Isabella’s purity and innocence stirs Angelo’s lust. He tells her that the only way to save her brother is to surrender her virginity to him. Repulsed, Isabella vows not to do so, even at the cost of her brother’s life. However, the men all around her pressure her to do so to save Claudio. Unbeknownst to everyone, the Duke is nearby in disguise, watching all of the events unfold, and decides to intervene. He enlists the help of the jail’s Provost (Nikolay Kislichenko), a current prisoner Barnardine (Igor Teplov), and a scorned former lover of Angelo’s (Elmira Mirel) to expose Angelo and save Claudio.

However, there are also wide and violent swings into dark territory, such as rape, deception, and murder. Some of these darker moments had extreme resonance with this reviewer, especially after the events of the past few weeks. When Isabella confronts Angelo after his disgusting overture, she says that she will expose his hypocrisy and perversion. His response is “Who will believe you, Isabelle?” He knows that it will be his word against hers, and being a powerful man, he is confident that he will be believed. And the worst part about it is that once he articulates it, she knows it is true. Isabelle is told over and over that the sanctity of her body is worth less than male lives, even as she agonizes over the choice of whether to sacrifice herself for her brother. This play is officially classified as a comedy, which illustrates the “problem.”

This production, produced jointly by the Cheek by Jowl Theatre Company and Pushkin Theatre of Moscow, leaned heavily into the darker aspects of this play. They started with a largely empty stage, filled only with 5 large, red, boxes and industrial lighting. As the audience came into the theater, there were vaguely disquieting sounds playing, like water dripping and what sounded like chains rattling in a large, empty space. Later in the production, the cubes were utilized to dramatic effect (Design by Nick Ormerod.) This was partnered with an extremely effective lighting design (Sergey Skornetskiy) and extremely unique use of music and dance (Pavel Akimkin, Composer and Irina Kashuba, Choreographer). My only criticism is the use of the subtitles; I was sitting toward the front, and could not read the subtitles while watching the action, which made it challenging to keep up sometimes.

The performers onstage were excellent – each person perfectly suited to their roles. One of the most challenging things about embodying the characters in this show is that there aren’t really any that are one-note. The Duke must be able to handle both the highly serious moments, as well as the few more comedic ones with equal gravitas; Arsentyev does this with ease. The other challenge is that you must make the Duke a character that the audience roots for, even though many of the actions that he takes are questionable at best. Arsentyev exudes charm in this role, which helps the audience to still consider him a protagonist, despite some of his more deceitful and selfish actions within the play. Vardevanian delivers a dynamic performance as the beleaguered Isabella. She shows both fire and fury at the situation she finds herself in, but also extreme conflict in what she should do. Perhaps most impressive is the quiet desperation and despair she relays at the end of the piece after the happy ending she thinks is happening takes a last-minute turn from someone who she thinks is an ally.

Kuzichev presents a complicated visage as Angelo – he portrays the character as someone who genuinely wants to clean up a city but gives way to his own most vicious and perverse impulses. Rykov also presents a Claudio who is scratching and fighting not just for his life, but for the life of his fiancee and unborn child. However, he seems all too willing to sacrifice his sister’s virtue to get this, which makes his character much more complicated. Kislichenko provides one of the most comedic moments of the show, and Feklistov is a source of much needed comic relief throughout this dire story, while also showing true emotion for the serious situation of his friend Claudio, doing everything he can to try and help him, however misguided. The rest of the cast come together to present a dynamic and avant-garde telling of a lesser known work of Shakespeare.

In Act 2, scene 2, Angelo asks “Is this her fault or mine? The tempter or the tempted, who sins most?” Both in Shakespeare’s time and ours, the answer should be obvious. And productions like this help to illustrate how far we still have to go before this is demonstrable in our society.

Advisory: This production included smoke effects and partial male nudity. Also, there were scenes of attempted sexual assault and violence against women which may be disturbing to some audiences.

While “Measure for Measure” has now closed, this reviewer highly recommends to check out the next show in The Kennedy Center’s World Stages, which will be “Barber Shop Chronicles,” co-presented by Fuel, National Theater, and West Yorkshire Playhouse. This show will show glimpses into barbershops in Johannesburg, Harare, Kampala, Lagos, Accra, and London. For tickets, please click here.