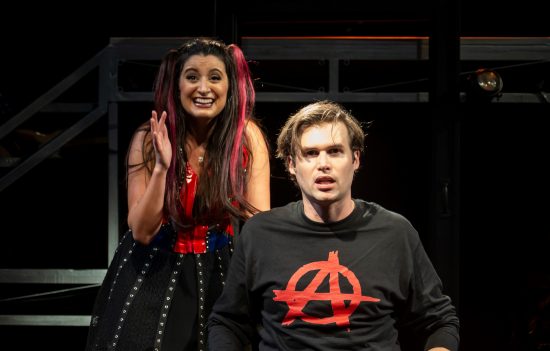 Candice Shedd-Thompson as Monica and Matthew Schleigh as Ian in ‘Rooms A Rock Romance’ at MetroStage. Photo credit: Chris Banks.

This is a likable show, with likable leads, and a likable score. It has that cute girl-meets-boy, boy-loses-girl, boy-wins-back-girl vibe, all told in a brisk 90 minutes. This is a delicious froth and was a perfect antidote to a dreary, rather gray week. It is also the 10th anniversary of “Room,” which premiered at Metrostage in 2008.

This is a charming, light-hearted look at the quest for stardom and the reality that hits so many in the face.

“Rooms” is the story of two young musicians who hop on board the punk train and work their way from Glasgow (where they both are from) to London, and then New York City. Along the way, they find themselves, lose themselves, have a brief affair, and part, until three years after their personal and musical breakup they meet again for a second chance.

Monica (Candice Shedd-Thompson) is a college-aged Jewish Scots girl who has never faced failure; she steamrolls her way through life; she is going to make it to fame and fortune no matter what. One of her favorite shorthand phrases is W.I.T: Whatever It Takes. Ian (Matthew Schleigh) is from the poorer side of town. She’s solidly middle class; he’s working class (his musings on how much he loves the fitted carpeting in her parent’s house during an early scene is truly funny). He is also seemingly paralyzed by the world and has retreated to his room in his mother’s house to write and play music and drink alcohol.

But when these two blend their voices, some minor magic happens. They have some real chemistry and are good enough musicians that they move to London where Monica has some connections and become a punk duo, rising rapidly to the top of the heap. It’s all very heady stuff for them; and yes, inevitably there will be a crash.

This is not a subtle show, you know what’s coming moment to moment. But the trip is enjoyable and there’s a lot of energy up on that stage, along with some lovely voices. In addition, musicians Yusef Chisholm, David Cole and Greg Holloway are back again at MetroStage; they have been playing there individually or together for a number of years. Joining them is Tony Harrod and the music director/conductor/keyboardist for this production, Matthew Stephens. Having a live band in such an intimate space added to the sizzle of the story.

Candice Shedd-Thompson fully serves up Monica’s larger-than-life personality, with a dollop of vulnerability. Her comedic skills are subtly showcased when she first meets Ian and has to hang on to the door jamb as her knees weaken and her ankles wobble. She has a fine voice and delivers the ballads especially with a poignant yearning.

As Ian, Matthew Schleigh has the accent down completely. He clearly thinks the girl is barmy but is also just as clearly smitten, although he hides that behind scathing one-liners, which are probably funnier delivered in a Scottish accent than otherwise. You never learn what has led him to hole up in his room, so his brooding lostness seems a bit self-indulgent, but he very capably embodies the soul of a musician who just wants to live his most authentic musical life.

Both Schleigh and Thompson are well-matched vocally. When they sing together they harmonize beautifully, neither overpowering the other. Would that their characters had found it so easy to stay in sync.

The set cleverly makes use of a full black doorframe set on wheels to indicate the different rooms they find themselves in. The multi-level steel staircase with platform allows the musicians behind them to both be part of the show and a little distant when the more domestic moments are in play.

This is a charming, light-hearted look at the quest for stardom and the reality that hits so many in the face. By the end, Monica has come to understand that W.I.T. is not just about her, and Ian has grown up and realized he needs to leave his safe room. It’s a comfortable journey.