Theatre Review: ‘Sing to Me Now’ at Rorschach Theatre 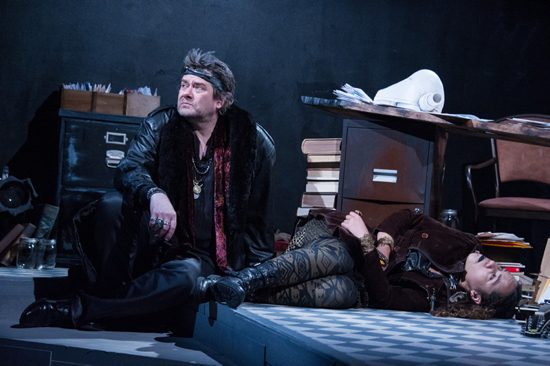 Even goddesses get the blues and evidently can fall further—into deep depression. Only when a goddess, or a god, becomes enveloped by the black fog of sorrow, grief and despair, the ramifications for mere mortals can be deadly.

…the heartbreak on her face….It’s a defining moment.

Not deadly in that a deity would decide to take out the human species in a sort of murder-suicide pact, but deadly in a more insidious way—slowly leeching the world of color and hope through the death of creativity and imagination and beauty, however it is beheld.

So when the last remaining Muse (of epic poetry), Calliope (Callie) is running out of time and organization and caring—what’s the answer? Hire a human intern. The hours are difficult since the job is done physically when the person is asleep; the handsome god of dreams Morpheus (Mo) is a distraction; and Callie is moody, sarcastic and judgmental, but for a young law school graduate who is having trouble finding a job, it’s all good. Yankee (real name: Claire), our intrepid would-be intern, acts the ditz very well, but she is smart and willing to push Callie when she believes it is important. Among the denizens of this other world she meets Hades (his entrance to the Underworld is just down the riverbank) who is her uncle and also one of her sisters’ ex-boyfriends; Callie’s and her deceased sisters’ mother, Mnemosyne (the Titan, Memory) who has too many memories and well, is in the words of her daughter, “batty;” and several of Callie’s sisters (Clio, Mel, Thalia). She also gets to experience the odd human having a creative moment without a spark of the divine and that nudges her to realize part of Callie’s importance in the human world.

One of Callie’s issues is that she won’t sleep. Sleep deprivation affects her creativity and she falls appalling behind on responses to human thought-letters for help (she’s had to move beyond epic poetry to a wider range, including recipes). She also won’t sleep because she relives in her dreams the last times she saw her sisters. But as she starts to trust and rely on Yankee, she agrees to let Mo, her best friend, gift her with occasional sleep. It is during these nap times, as Yankee and Mo are fishing for her in the river of people’s thoughts/dreams/ideas, that they fall for each other. Also with Mo’s help, Yankee enters Callie’s dreams as her dead sisters; she begins to understand the scope of her despair of the mortal world. This will lead to an act of utmost unselfishness.

As Yankee, Tori Boutin, is simply hysterical. She has a comedic timing and ability to quickly pull a funny face and flee the scene that is just laugh-out-loud funny. She even walks funny. She and Erik Harrison as Mo have a nice chemistry together; Harrison also takes what could have been a stereotypical blonde beach bum type of character and lets the godly underpinning out—he is a god who cares, who realizes his limitations, but who persists.

Ian Armstrong as Hades gets off what may be the funniest line in the show (as he is trying, not too successfully, in comforting Callie), “I’m just not good with death.” It really is a show-stopping moment.

Cam Magee as Mnemosyne is baffled and baffling, but you feel her power as a goddess when she needs to aid her last, despairing, but still-living daughter; she’s a force to be reckoned with. Desiree Chapelle plays a variety of characters including several of Callie’s sisters, but the heartbreak on her face as she sees the library in Alexandria burning is so vivid it almost scorches the audience to watch her. It’s a defining moment. Rounding out the cast is Jonathan Del Palmer (Rrose, et.al.) demonstrates his range playing a number of characters who flit in and out.

Jenny McConnell Frederick directs with a deft, comedic touch. In the pantheon of gods, like with mere mortals, life isn’t all-powerful, and she captures those inevitable “oops” moments in all their glorious ridiculousness. The imaginative set by Swedian Lie makes magical use of the river bisecting the playing space; combined with the lighting effects by Sarah Tundemann, particularly when Mo and Yankee are fishing human dreams out of the river, transports you to a realm where such things might truly be possible.

This is a play that basically asks: Are Humans Worth Saving? Yankee becomes the hero all epic stories need; her very willingness to be that hero gives us the answer—there is always hope. And that might have to be enough for these gods to continue investing in a world that no longer even remembers their names.