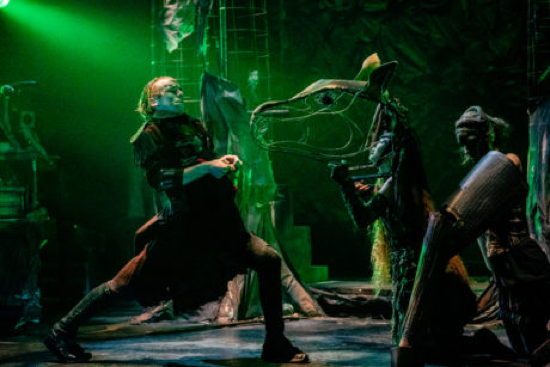 When picturing Ichabod Crane, I always pictured a lean, rangy, superstitious schoolteacher. That is not the Ichabod Crane of Synetic Theater’s muscular, voluptuous and engrossing retelling of the ‘Sleepy Hollow’ tale. In this version, Ichabod Crane, played with bravado and brutality by Vato Tsikurishvili, is a warrior and a coward, an importuning lover and a man assaulting his wife, a hero and a man who has fallen about as far as a man can go. He is a physically powerful bear of a man who scoffs at weakness and bullies others.

. . . this “Sleepy Hollow” is a windswept, eerie and sorrowful ride with genuine chills.

Synetic’s “Sleepy Hollow” differs from Washington Irving’s short story in several important ways, but captures the feel of a supposedly haunted wood in a time when humans had mere lanterns, tangled forests blocked out any ambient light, and every rustle became a threat. Other than the love triangle of Ichabod, Katrina Van Tassel (McLean Jesse) and Brom (Justin J. Bell), the story diverges wildly from the original. Lucky for D.C. area audiences that it does, because this “Sleepy Hollow” is a windswept, eerie and sorrowful ride with genuine chills.

Also—slight spoiler alert—this Ichabod Crane doesn’t die or disappear in the end; no, he is left to reckon with a much more poetic justice.

This was a remarkably staged show. At one point, through devilishly clever use of lighting and shadows, bunching and movement, and a driving score, what were actually seven in the ensemble chasing Ichabod with severed heads/skulls looked exponentially larger and more threatening. It was a startling and disconcerting effect. As one knows to expect from Synetic, the graceful and powerful athleticism of the players helped to carry the story arc forward seamlessly.

Among the divergences in Synetic’s presentation from the original story is the character of the horse, Spirit. Maryam Najafzada as Spirit brings a classically trained ballet sensibility to her portrayal of Spirit. She embodies the horse’s speed and grace and steadfast loyalty to her partner, the Hessian soldier who becomes the Headless Horseman. Synetic makes imaginative use of puppets for the horse’s head and forelegs; the former in wire which is eerily evocative, and the latter in a fabric-covered frame ending in quite realistic looking hoofs. These tools are used when the full might of the warhorse pursues and intimidates the villagers caught in the woods. At the quieter moments between the Headless Horseman and Spirit, Najafzada dances their connection and partnership in a wordless conversation that is luminous. This is truly a partnership in the spirit of Kipling’s “The Thousandth Man.”

The three living leads, Vato Tsikurishvili as Crane, Justin J. Bell as Brom, and McLean Jesse as Katrina Van Tassel magnificently lead the cast in the physical manifestations of character and morals. When the horrible secret of who the Headless Horseman really is comes out, Katrina’s rejection of Crane is robust. She may be his wife and the daughter of the local bigwig in a time when women had little legal standing, but she’s his equal in determination. Synetic brilliantly sets up the scene where, rather than take responsibility for his having brought this curse upon them, Crane tries to force his will upon her as his right as her husband. Their ensuing fight–her repudiation and his attempt to force her acquiescence—is a mesmerizing foreshadowing of what their future relationship, if any, will be.

As Crane’s closest friend, Brom comes to the horrifying realization that his friend is so much less than he thought; and not only that but he will do almost anything to protect his standing. From a really funny courting scene with both Crane and Brom wooing Katrina to a vicious confrontation in the woods, the two men aptly portray the journey from friends and soldier-comrades to rivals to strangers. There was a moment in their big fight scene when Crane suddenly lifted the table (could easily seat 8-10) and as Brom ran up and dove over it at Crane to stop him you could feel the audience hold its collective breath. It was a daring, determined move that caught Crane somewhat by surprise; and was a physical shorthand for the two men’s relationship. It also was a highlight of Synetic’s choreographic genius and daring.

As the Headless Horseman, Scott S. Turner is a nightmarish figure, a murdered man who cannot rest. His rage and anguish are evident in his relentless pursuit of those who trespass in what is now his woods. Not only does Turner have no words, but he also has no face. His ability to so clearly express his feelings is a remarkable feat.

The scenic designer, Phil Charlwood, deserves special mention for a set that set a mood of encroaching darkness and creeping terror so well that even sitting and waiting for the show to begin was eerie. The atmospheric lighting was designed by Brian Allard. Costume designer Erik Teague provided the cast with clothing that looked truly of the era and not romanticized. In particular, in this show, the music by composer and sound designer Konstantine Lortkipanidze was everything you could wish for in a vengeful ghost story—spooky, eerie, chilling, hauntingly sad. Never overwhelming or Halloween-kitschy, it set a sorrowful menacing mood.

Irina Tsikurishvili, Synetic co-founding choreographer and associate artistic director, choreographed the production. It was daring and devilish and creepy, and a masterwork of physical movement. Paata Tsikurishvili, founding artistic director of Synetic, directed this production. It was a taut, tension-racked 80 minutes that moved almost seamlessly.

It is worth noting that this is the first wordless non-Shakespeare that Synetic has done. The company is known for their wordless Shakespeare plays, and this first attempt at branching out to other literary works makes me hope that they will do it again and again.