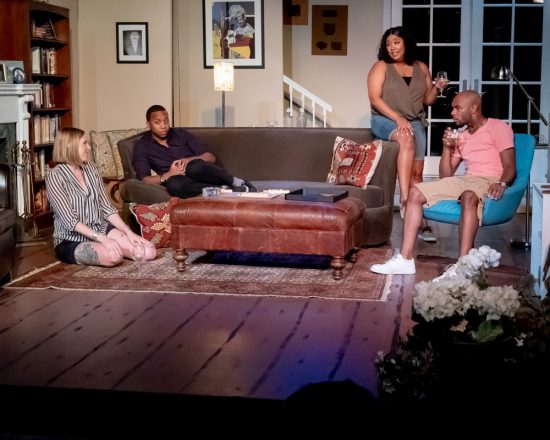 Spanish Telenovelas beam with explosive family drama, confessions and discoveries of past indiscretions. Watching “Stick Fly” at Fells Point Corner Theatre in Baltimore piqued my primal interests as I watched fixated at the revelations of each character unfold in the progression of this fiery production. “Stick Fly,” written by Lydia R. Diamond and directed by Christen Cromwell, touches on many taboos and juicy secrets common in dysfunctional families, but from the African-American perspective nestled in upper-class Martha’s Vineyard. An affluent black family, the LeVays, meet in their Martha’s Vineyard home for a weekend, which the two sons, Harold (JC Payne) and Kent (Jared Michael Swain) bring their prospective wives to meet their parents. However, underneath the surface of a seemingly pristine façade of a highly successful and well-respected family are the cliché skeletons and ghosts that fog the rose-colored glasses. As with the telenovelas and the old daytime soap storylines, this play gives good doses of jaw-dropping coincidences and deep gasping betrayals. Troubles are hinted at the onset and are gradually unpacked, peeling away at some heavy topics –from the black versus white theme in American culture to the bruising of father and son sparring.

The bursting of conflict erupts early on when Kent arrives at the LeVay home to introduce his future wife, Taylor (Adrienne Knight). Taylor meets the maid, Cheryl (Shelby Sullivan) and ruffles her feathers almost immediately with insisting on helping in the kitchen –even after being told repeatedly her help was not wanted. Adrienne Knight’s portrayal of Taylor was superb as it was very convincing and she deserves much praise for her performance. I was especially moved by her intense and expletive bombardment of Harold’s girlfriend, Kimber (Barbara Madison Hauck). Kimber, the “white girl” gave her opinion of the black versus white privilege dynamic which set Taylor off on a tirade on how it is impossible for white folk to truly understand the plight of black folk of lower classes, or any black folk for that matter. It was a hot button topic for sure, but quite entertaining to watch.

This play tries to make serious conversation into a comedy-drama of sorts, and at some levels, it succeeds. However, I came away with a genuine interest in the backstories of the characters and I believe it is mostly due to the chemistry of the actors. Although I think Adrienne Knight was wonderful, she was well supported by some stellar actors including Louis B. Murray, who plays the patriarch of the family, Dr. LeVay, and is a well-seasoned actor with a long list of stage and TV credits. Her “white girl” counterpart, Barbara Madison Hauck, was equally fantastic, fighting off the awkwardness of being a true outsider and simultaneously helping to steer the story’s resolution. The two brothers, Swain and Payne, both complemented each other well as polar opposite brothers, and Swain’s punching of Payne was pretty real –and when you see this performance, you’ll understand why it is well deserved. Also, Shelby Sullivan playing the role of Cheryl was probably the most authentic of them all. Since she is a classically trained vocalist, she is clearly comfortable on stage and brings a fresh and impassioned intensity to the play that stirred me internally.

The playwright, Lydia R. Diamond, has created a story that displays how unfair life can be from a context that is often difficult to fathom unless you are subjected to racial biases and discrimination. There were a few details that could have derailed this play, but one can be compelled to forgive “theatrical sins” if the story is engaging, has strong content, and provides a good cast that funnels audiences to feel its organic resonance. “Stick Fly” is an exceptionally well-crafted depiction and perpetuates serious introspection. Director Christen Cromwell assembled a brilliant cast and delivers a captivating story in a manner that merits high praise. In spite of the soap opera comparisons mentioned before, there truly is a profound story intertwined with the exposing of secrets and love affairs –perhaps it is in code, but I certainly get it. There aren’t many plays I would like to see multiple times, but “Stick Fly” is definitely one of them.