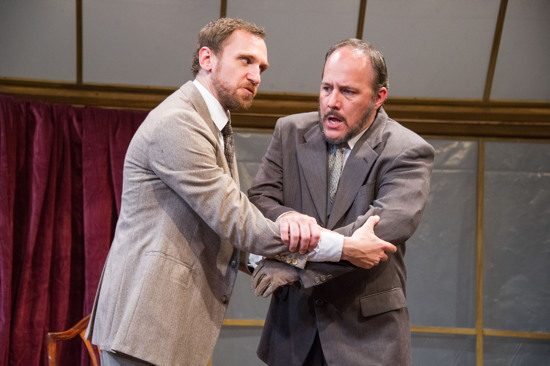 How thin is the membrane between death and life? Are there times when perhaps the dead can cross over and stand beside us, just for a moment, so that we can sense them, if not see or hear them? If that moment could be captured, what would you give for it? Would you conjure them out of love or guilt or despair?

This is an intelligent, resolute work that explores some large questions, and these actors bring us fully into that world.

These and other questions are pondered in the mesmerizing and informative (a winning combination as written by Arlitia Jones and directed by Kasi Campbell) ‘Summerland,” a historical drama set in 1869 when the Civil War was still raw physically and emotionally in both the North and the South. Based on a true story it delves a bit into one of the waves of spiritualism that has swept the nation by focusing on one of the most famous proponents of it at that time. William H. Mumler (Yuri Lomakin) is a “spirit photographer;” in other words, he takes photographic portraits and by letting the exposure go on a little long, the finished photograph may show a loved one beside the living subject. His second wife, Catherine Mumler (Rachel Felstein) helps him by setting his appointments and handling the business end of it. She also has sole charge of the domestic sphere, as he so dismissively and quaintly puts it under interrogation by Chief Marshall Joseph Tooker (Steven Carpenter).

Possibly because he had some rather famous clients—including Mrs. Lincoln who had a portrait done under an assumed name and when it was printed showed her husband, Abraham, standing behind her with his hands on her shoulders—the mayor of New York assigned Mr. Tooker to investigate him for fraud. Of concern was the fee charged for one sitting; at $10 a sitting it was clearly for the wealthier citizen.

The first half of the show is a duel of words between Mr. Mumler and Mr. Tooker. They are well-matched in this verbal war, and both metaphorically draw blood. Mr. Mumler is a proponent of Summerland, a place where loved ones wait and where there is a stream, and meadows, and copses and lilacs, and because the veil is thinner there, sometimes they can cross over and appear in a photograph. Mr. Tooker is more interested in the mechanics of how these appointments with the spirits are made and are they ever late? He smells fraud and is determined to unmask it.

In the second act, we meet Mrs. Mumler. Mr. Tooker attacks her character and alleged past as a spy with almost missionary zeal; he seems to have a special scorn and hatred for her. She may be the real deal as a medium, or just very, very good at research (and she does volunteer work for the New York branch of the U. S. Sanitary Commission, which as part of its mission tried to match names to the dead). Over the course of the second act, the ground shifts, and then shifts anew, as more is revealed about the characters and their pasts and future ambitions.

This is all deliciously spoken in very erudite, civilized language. Even when insults are flying, the language remains genteel and very potent. But it isn’t stuffy. The writing is alive and haunting, which fits the story well. As Mumler, Lomakin portrays him as a man who desperately believes, and who has cast off all other concerns, including that of being a husband to his wife, in order to catch a glimpse of Summerland, and his dead son. It is a stark and riveting performance of a true believer who has been badly hurt.

Steven Carpenter is as fiery as Tooker. Carpenter plays him as much as a true believer as Mumler, only his beliefs are more self-centered and certainly centered on the earthly domain; he is an ambitious man and is determined to make his name nationally as the man who exposed this alleged fraudster. It is a fine balancing act, because there is some core of decency and unresolved guilt under the ambition and anger, and Carpenter subtly lets us see that core.

Both men, in their own ways, reserve their deepest pain/anger for Mrs. Mumler. To her husband, she has a power he wants, but cannot really claim; and to the marshall, she is a cold-hearted treasonous woman who deserves to hang. She is a survivor and uses every weapon at her disposal to find an advantage. When she receives Tooker alone, as her husband is sleeping, she plays him as adroitly as a cat idling with a mouse. Who knew that a flash of calf and ankle from beneath a prim white cotton nightdress could reduce a man to stammering? It was also beautifully ironed and that ironed nightshift was as impregnable as armor. A small detail, but indicative of the care with which this show is mounted. Felstein’s Mrs. Mumsler has the intellect of a chess master and the resolve to carry through her plans, whatever they may be. She is the most mysterious character of the three, and as a woman in 1869, the most vulnerable, and she too is shadowed by pain, although we don’t ever learn what it is.

This is an intelligent, resolute work that explores a little-known time, and these actors bring us fully into that world.