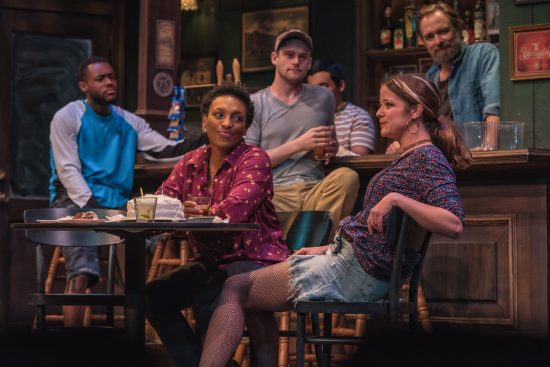 After watching “Sweat,” it’s not surprising Lynn Nottage won the Pulitzer Prize in 2017 for this brilliantly stirring drama. This story flips back and forth between the years 2000 and 2008 in the backsliding factory town of Reading, Pennsylvania. The perspectives are stinging representation of the blunt reality of how NAFTA affected the working class people in the rust belt of America. Most of the deep-rooted sentiments and climactic flurries take place in 2000, but the after effects in 2008 were sobering confrontations with the matter of politics and the people caught in crosshairs of corporate greed. “Sweat” opened on October 23rd at Everyman Theatre and presents one of the most powerful explorations of economic consequence I have seen in quite some time.

The performers in this play were stunning and the action never ceased from start to finish.

The opening scene takes place in 2008 with split meetings between a parole officer (Jason McIntosh) and two recent parolees. Jason (Matthew Alan Ward), whose face is covered in tattoos, cannot contain his outbursts and rough sarcasm, even when the cool-tempered officer threatens him with a trip back to prison. His former friend Chris (Vaughn Ryan Midder) recounts bumping into Jason on the street with a trembling and emphatic heaviness in his tone that rattled me. In spite of the chaos that leads to their ultimate misfortune, the blame for it all was both complicated and rather simple.

The stage was something quite remarkable: it rotated so that one side was a bar scene and the other side were other scenes. The cozy, neighborhood bar, hosted by the bartender Stan (Kurt Rhoads) is the main setting in this play. It’s a place where friends and co-workers go to celebrate birthdays and retell highlights of their lives in intoxicated embellishments. However, the camaraderie and years of friendships are torn to shreds by troubles conjured in the wake of factory owners relocating their plants to Mexico and other countries, leaving communities befuddled and increasingly desperate, as evident by the characters proliferating acrimony in their futile attempts to save their livelihoods.

The performers in this play were stunning and the action never ceased from start to finish. I really thought Deborah Hazlett’s portrayal of “Tracey” stole the show, as her often belligerent rants were electrifying and her attempts to display dispassion only strengthened her character’s demeanor. Alejandro Ruiz as the innocent helper “Oscar” was also impressive in his ardent justifications for seeking employment as a replacement for the unionized regulars at the bar. Dawn Ursula played the cool and admirable “Cynthia,” whose ascension up the management ladder was both a blessing and a curse, as it put her at odds with her longtime friends. Megan Anderson as “Jessie” and Jaben Early as “Brucie” were terrific fringe supporters who also found themselves ill-equipped to be in the middle of all the uproar and chose to self-medicate rather than elevate to the challenges in their lives.

I found this story to be as much about relationships as it is about the impact the NAFTA trade deal had on middle America. It may not be a comfortable narrative for any political side, but it isn’t meant to be. It’s realistic angle delivers a heavy punch right to the belly of the equidistant political snobbery and it is absolutely delicious to watch. I give high praise to director Vincent M. Lancisi for his hand in this incredible performance.

The story is simply fantastic and the stage production is one of the most realistic I have seen so far this season. Credit goes to Daniel Ettinger for the set design, Harold Burgess for lighting design and C Andrew Mayer for sound design, as their synchronized pulse and movement was impeccable. Costume designer David Burdick put the perfect attire together for the characters, and stage manager Amanda Hall deserves much praise for making the scenes seamless and fluid.

At the conclusion of the performance, the audience was more than enthusiastic to give a well-deserved standing ovation. I absolutely loved this production and recommend it to even the newbie theatre-goer. Everyman Theatre has found a true gem in “Sweat.” Don’t hesitate. Just go see it.