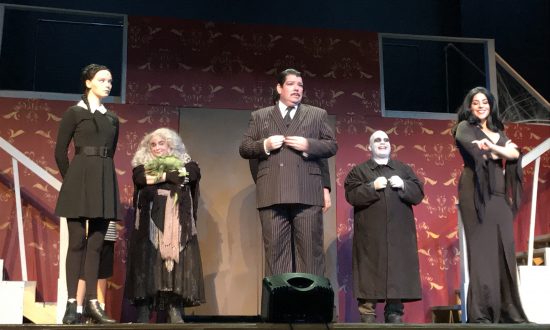 With Halloween encroaching, it is quite fitting that “The Addams Family” hits the Silhouette Stages at the Slayton House Theatre in Columbia, Maryland, right on cue for the season. “The Addams Family” has been traditionally embraced as a quirky, dark comedy for generations and only mildly morbid. However, this musical rendition is so irresistibly charming and entertaining, I couldn’t help but thoroughly enjoy practically every minute of this performance. It is ubiquitously billed as a family program, but the innuendoes are just slightly beneath the radar of the kiddy inquisitive mind and just silly enough to make you laugh and be mesmerized by an exceptionally charismatic cast.

…this musical was beautiful from the first note to the final bows.

The general premise of this show is Wednesday (Heather Moe), the gloomy daughter of Gomez (Vincent Musgrave) and Morticia Addams (Santina Maiolatesi), falls in a love with a young man named Lucas Beineke (Drew Sharpe). The young lovers plan to announce their engagement at a dinner between the Addams and Beineke families, which takes place at the Addams’s estate in Central Park. The straight-laced Beinekes are shocked at the ghoulish nature of the Addams family, but loosen up as the story progresses. Each character in this play was intimately connected to each other and each had their moment to drop those well-timed vaudeville one-liners that made the audience burst out in laughter and applause.

I thought Musgrave’s performance as Gomez Addams was absolutely brilliant. His voice was fantastic in the many songs he sang, and his tango with Morticia was as sizzling as it was hypnotic (and quite erotic, to be frank). Speaking of Morticia, Santina Maiolatesi’s performance was not a carbon-copy of Anjelica Houston, which is what I was expecting. She put her own hot spice to this character and it was delicious. Heather Moe as Wednesday was so inimical and compelling, I think she was born to play this role. Other notable mentions include Christopher Kabara as Lurch, who was sufficiently tall enough for this part, but the elevated shoes certainly gave this character more freakishness. Michael Crook as Fester was a little goofier than what I expected, but he provided the lacquer that brought a little gloss to an otherwise dreary backdrop. The well-seasoned Ashley Gerhardt gave her character, Alice Beineke, the frustrated, reserved wife, an explosiveness that made me grin from ear to ear. I’m pretty sure I wasn’t the only one. The ensemble of the Addams ancestors was also lovely in a creepy way and blended in quite well with each other without looking like staggering zombies.

This performance is a musical in a community theatre, so there are tons of songs, but honestly, it never felt like a song-and-dance show. It flowed from scene to scene with grace and the storyline never meandered. Much credit goes to Rachel Sandler for the musical direction, and director Tommy Malek, who also choreographed this performance. Along with stage manager Donna Hawkes, this musical was beautiful from the first note to the final bows. The numbers were done exquisitely and I thoroughly loved this show. There were some minor technical hiccups, but the performers worked through them without much notice.

Silhouette Stages is running “The Addams Family” musical through October 28, 2018, just in time to dive into the Halloween whirlwind that kicks off the holiday season. Click here for more information, dates and times, and to purchase tickets.