Theatre Review: ‘The Babylon Line’ at The Colonial Players of Annapolis 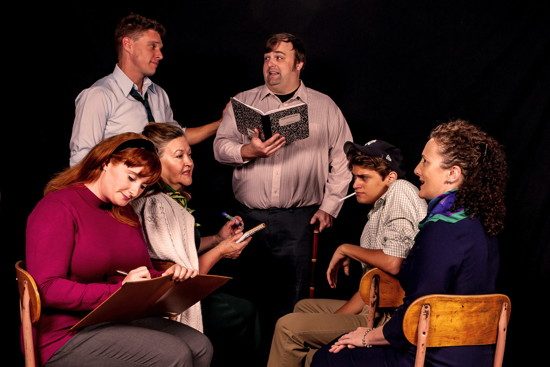 Can the stories we tell change our lines? Can we really be honest in stories? If we’re honest in our stories, can we handle the fall-out? Can we, should we use our stories to try to seduce someone into rescuing us from our lives? All these questions, and more, are at least touched upon in “The Babylon Line,” now playing at The Colonial Players of Annapolis

The upshot is, you care about these people….

Set in the late 1960s, the play introduces us to Aaron Port (Ron Giddings), the ersatz teacher of an adult ed creative writing class in Levittown on the Babylon Line in Long Island. Mr. Port manages to get the minimum number of six needed for the class to continue, which is good for him since he has bitterly and/or sourly taken this job to bring in some much needed cash. For you see, he is a writer, although it has been a long time since a “promising” essay was published and he bridles at the word (or accusation) of being “blocked;” he prefers “patient.”

Also in the group are Frieda Cohen (Alicia Sweeney), who is, shall we say, outspoken and opinionated; Anna Cantor (Mary MacLeod), a follower of Mrs. Cohen; Midge Braverman (Lindsey Miller), another follower of Mrs. Cohen; Jack Hassenpflug (Jeff Sprague), a Korean War vet—maybe; Marc Adams (Jack Leitess), the youngest and a former valedictorian lost to “the” marijuana; and Joan Dellamond (Robin Schwartz), who sets a lot in motion with her stories. The story follows them over the course of the term.

The cast as a whole does a lovely job with their characters and with the time period. The story is a bit more problematic. The play starts out with a monologue by a much older Mr. Port who says that for 51 years he has wanted to tell the story of this class because it is so important to him. But that never quite gels. Over the course of the evening, we do learn something about these people, but never quite enough to understand their importance. The author, Richard Greenberg, attempts to give us an answer by ending the show with a quasi-monologue that gives us a glimpse of the future of the characters, but it’s too pat, too neat to be truly believable.

As Marc Adams, Jack Leitess is a revelation; he also plays three other, older, peripheral characters (a mini-successful acquaintance of Mr. Port’s; the angry husband of Joan Dellamond; and an angst-ridden son of Frieda Cohen). His initial character, the lethargic, mostly monosyllabic Adams, doesn’t have much to work with, but Leitess gives him a hint of vulnerability and anger underneath that louche dismissiveness. And when he finally reads a contribution at the last class of the term, he slams you with his thoughtfulness and youth and despair.

Alicia Sweeney takes Frieda Cohen’s busybody, mean-girl, queen bee persona and just runs with it. She challenges Mr. Port and makes him face some uncomfortable truths. And of the entire class, she is the only one who refuses to share any writing; Sweeney endows her character with a desperate protectiveness of her world. It’s sad and brave at the same time.

The upshot is, you care about these people and their rather frighteningly mediocre lives; perhaps they are taking the class because current events or French cooking was filled up, but they made a choice to step out of their comfort zone and try something. Interestingly enough, of all the characters, Mr. Port is the least likable. When at one point he refers to a list of cons he has made about his wife, and they all revolve around how much she smilingly sacrifices for him, you want to whisper “divorce lawyer” in her ear. He is sour and bitter and ostentatiously world-weary and hasn’t earned the right to be. Nor have his students earned his disdain and contempt; Mrs. Cohen calls him out very smartly on that.

The costumes are perfect for 1969 middle-class housewives and one rather intense ex-serviceman, and a disaffected young man. As befits her status as the outsider, Mrs. Dellamond wears slacks and a sweater; all the other women wear a nice dress or suit and stockings and heels. The pocketbooks are pitch-perfect as well. Beth Starnes designed the costumes. Nick Beschen was the set designer and the metal and wooden desks in two rows on the boundaries of the stage facing the teacher’s desk with the globe work well in evoking the confines of their lives. John Purnell, who designed the lighting, uses it to highlight seasons and aside moments, which is effective in a play produced entirely in the round. David Cooper is the sound designer; a couple of times, when a character was not facing one side of the audience, the music was enough to muffle the words. Jennifer Cooper directed the play.