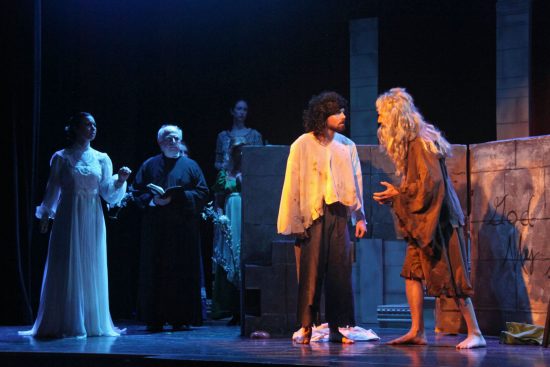 “On February 28, 1815, the three-masted Pharaon arrived at Marseilles from Smyrna, commanded by the first mate, young Edmond Dantès, the captain having died on the voyage. He had left a package for the Maréchal Bertrand on the Isle of Elba, which Dantès had duly delivered, conversing with the exiled Emperor Napoleon himself.”  Thus begins “The Count of Monte Cristo” in the abridged “World’s Greatest Books” version. Dantès, the apolitical protagonist of the classic French novel by  Alexandre Dumas, père, is accused by his enemies (one seeking self promotion, one seeking the hand of Dantès’ beloved Mercedes) of being a Napoleon loyalist, and the naïf is thrown into prison for endless years.

…an enjoyable presentation evoking fond memories of the book in a way which does not condescend to its audience.

These and many other events are presented in truncated flashback form in the current stage production directed with sensitivity and spirt by Eleanore Tapscott at Alexandria’s Aldergsate Church Community Theater – and little wonder: The Penguin Classics edition of the Dumas novel runs 1276 pages!  This condensing technique is very effective, as Dantès narrates his sad tale to Abbé Faria, the Jesuit priest and political prisoner who has tunneled his way to Dantès’ cell.  The Aldergate’s sets are modest:  simple brown walls representing the prison as the scenes Dantès narrates play out on a raised platform in the background.  Yet the period costumes and vivid dialogue are highly effective in telescoping much of the book in a short time.

Aside from the necessity of summarizing some of the early action in the book in the prisoner-tells-past-life-to fellow-prisoner form, the Aldergate version of “The Count of Monte Cristo,” adapted by Charles Morey, is a very traditional production, and traditional in the best sense of the word.  The novel is rendered faithfully, the costumes are authentic to the era, and the sets in the second half are austere yet classically graceful.

One aspect that I treasure about this production is that it respects the intelligence of its audience. Abbé Faria attempts to educate Dantès in the great luminaries of Western philosophy:  Plato, Aristotle, and Machiavelli (a great irony that, as Machiavelli was imprisoned and tortured for political reasons). Parallels are made to Homer’s “Odyssey,” as Dantès breaks free of the prison and comes home in disguise à la Odysseus  to take revenge on the usurpers and suitors.  Mercedes, no Penelope, has married the suitor.  It would have been easy to excise many of these classical references and allusions for the sake of time, but the Aldersgate troupe, to its credit, does not.

A small quibble on dialogue:  Much of the witty repartee from the novel is preserved as Dantès, who has taken on a new identity as “The Count of Monte Cristo,” meets his former tormentors and makes comments which mean one thing to his nemeses and quite another to the audience (already, of course, informed of his identity).  Unfortunately, some of the dialogue occasionally slips into modern slang and parlance:  “okay” here and there, and “that’s what I get for teaching you Latin” or some such modernism.  I was not certain if this was due to the adaptation by Charles Morey or is exclusive to the Aldersgate production.

The acting is uniformly excellent, especially with Tim Caron (at times swashbuckling with swords!) in the lead role. Emily Golden is a charming Mercedes.  Unfortunately, her lines were not very audible in one scene.  As the voice projection was good throughout the production, I am assuming this due to a place on stage where the acoustics are not as good. James McDaniel is earnest, enthusiastic, and entertaining as Abbé Faria, and this will be a character favorite in this production with audiences.

The music (very often by Dumas’ contemporary Chopin) is recorded but very effective.  Much of the non-Chopin music is a bit like a sentimental orchestral film soundtrack playing in the background.  This is appropriate, however, as many viewers will know the story through its various cinematic renditions.

Aldersgate Church Community Theater’s production of “The Count of Monte Cristo” is an enjoyable presentation evoking fond memories of the book in a way which does not condescend to its audience.

Running Time: Two hours and 45 minutes, including one 15-minute intermission.

“The Count of Monte Cristo” plays through October 14, 2018, at Aldersgate United Methodist Church- 1301 Collingwood Road in Alexandria, Virginia. For tickets, buy them at the door, or purchase them online.