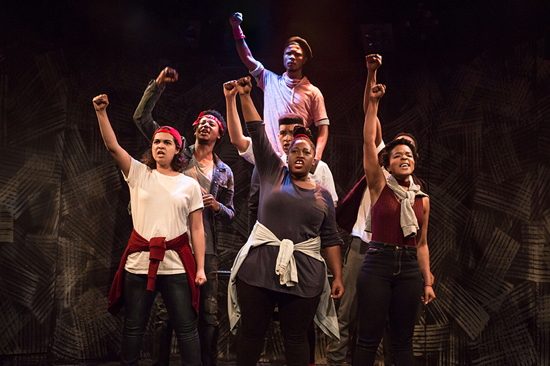 The cast of The Fall, now playing at Studio Theatre. Photo by Oscar O’Ryan.

In 2015 the University of Cape Town (UCT) in Cape Town, South Africa, faced something pivotal that has since brought the topic of decolonization to a more global audience. The statue of Cecil Rhodes, which had been erected in 1934 finally came down after a student-led movement. These young black South Africans stood up for themselves and brought about change to their community. It didn’t stop there and even in 2018, the decolonization has much further to go. The events documented in ‘The Fall’ follows the students at UCT as they discuss what must be done to make their campus safe, accessible, and welcoming to all students.

It is a complex and powerful journey. The production’s tempo never wavers and the musicality is enrapturing.

After the events of #RhodesMustFall, Baxter Theatre Centre at UCT commissioned this documentary piece of theatre capturing the students’ experiences. The audience is given a window into debates surrounding decolonization, racism, sexism, and so much more that goes into being an intersectional movement. It is a complex and powerful journey. The production’s tempo never wavers and the musicality is enrapturing.

The ensemble of actors is made up of Ameera Conrad, Oarabile Ditsele, Zandile Madliwa, Tankiso Mamabolo, Sizwesandile Mnisi, Sihle Mnqwazana, and Cleo Raatus. They start the show off with incredible physical and emotional energy that truly heats up the room. They are electrifying storytellers and also have a knack for movement. Watching the way they worked together with such passion was inspiring.

The piece also featured projections with actual footage from the events of #RhodesMustFall and later #FeesMustFall. The use of projections aided in the storytelling beautifully. Lighting designer Michael Maxwell created a beautiful world for these young people to explore.

The simple yet practical set designed by Patrick Curtis consisted of a few tables that could be turned into just about anything the students needed. It was creative and allowed the audience to use their imaginations.

How might this piece be relevant in 2018 in the United States. We seem to consistently be having conversations about whether or not certain statues should be on display or not. Marches are happening all the time in DC about various aspects of intersectionality. “The Fall” is a part of our own lives, whether we realize it or not. This is an impactful and important piece of theatre that is not to be missed.

“The Fall” from the Baxter Theatre Centre at the University of Cape Town runs at Studio Theatre through Nov. 18. For tickets and more information click here.