Theatre Review: ‘The Hunchback of Notre Dame’ at The Arlington Players 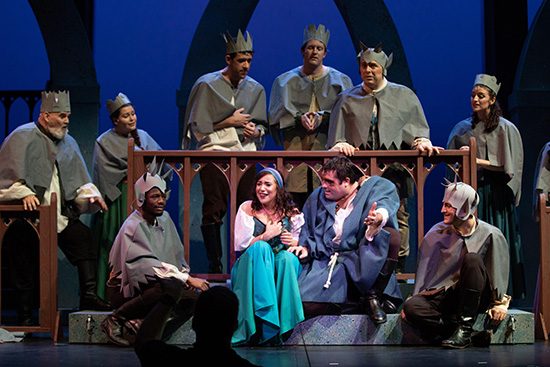 Alex Bryce as Quasimodo, Adelina Mitchell as Esmeralda, surrounded by members of the ensemble in “The Hunchback of Notre Dame.”

When the curtains part at the beginning of the Arlington Players’ new production of “The Hunchback of Notre Dame” it’s to reveal the titular cathedral, all soaring arches and stained glass. The grand space provides a perfect backdrop for the operatic emotions of this deeply enjoyable musical, equally impressive in stagecraft as in vocal talent.

Based on the original novel by Victor Hugo of the same name, and later developed by Disney into a film and a stage musical, the show’s music is by Alan Menken, with lyrics by Stephen Schwartz. Set in late 15th century Paris, it opens on a pair of brothers, the pious Dom Claude Frollo (Adam Strube), and his wayward brother Jehan (Daniel Lakin). The latter’s bad behavior, and hasty marriage, leads to an estrangement between the brothers. Nevertheless, at Jehan’s deathbed, Frollo agrees to raise his dying brother’s infant child, whom he names Quasimodo (“half-formed”) as a cruel comment on the child’s hump-back.

…equally impressive in stagecraft as in vocal talent.

Raised by Frollo to be the bell-ringer of Notre Dame, Quasimodo lives an isolated existence, with only the cathedral gargoyles to talk to. His life changes when he escapes his cell to join the Feast of Fools, a mardi-gras style holiday that flips everyday customs “topsy turvy.” Quasimodo joins the rapt audience watching Esmeralda (Adelina Mitchell), a young French Roma woman, dance. Picking him out of the audience, she crowns Quasimodo the “King of Fools,” an honorary position of the revelries which he enjoys until the raucous mob becomes violent. Concerned for his well-being, Esmeralda follows Quasimodo back to Notre Dame where they form a friendship, later complicated by Frollo’s own darker feelings for the young woman.

Director Richard Farella underlines the importance of authenticity by casting a deaf actor, Alex Bryce, in the role of Quasimodo (who in the story has become deaf from ringing the cathedra’s bells). The production simultaneously deconstructs “otherness,” and the perception of disability, by having Bryce put on his costume on stage, including the material that creates the illusion of a hump-back.

Bryce excels in the role of Quasimodo, bringing an electric expressivity and physicality to the role. He is paired with the reliably excellent Alden Michels, who conveys much of Quasimodo’s signed language, both speaking and singing (Bryce both speaks and signs).

Adelina Mitchell is similarly luminous as the street-wise, fiercely independent Esmeralda. “I’ve never been good at following rules,” she asserts early in the story. Mitchell brings significant vocal talent to the role, imbuing her performance of “God Help the Outcasts,” a prayer for her people, with a special warmth and intelligence.

The energy remains high throughout the show, featuring wonderful set pieces and heady choral arrangements like “Entr’acte.” The presence of the choir onstage, as though accompanying a mass, often heightens the intensity of the proceedings, and adds to the robust sound of the many ensemble pieces.

The star-crossed couple unfortunately attracts the wrath of Frollo, who himself becomes obsessed with Esmeralda. Adam Strube gives a powerful performance, delivering words of toxic condescension and moral hypocrisy in beautiful bass tones. Strube’s calm and priestly demeanor descends eventually into frenzy, showcased in the song “Hellfire,” where he rails against his attraction to Esmeralda. Ryan Desmond’s lighting design deepens toward darkness as Frollo’s obsession leads him to declare Esmeralda an enemy of the city, and call for her capture and imprisonment.

The ultimately tragic ending is treated with a lyrical softness that places the emphasis on the necessity of personal agency, kindness and empathy. It admirably draws the curtain on an evening of very fine entertainment.

Running Time: About 2 1/2 hours with one 15-minute intermission.

Advisory: The production includes a scene of sexual assault.

“The Hunchback of Notre Dame” runs through Oct. 20 at the Thomas Jefferson Theatre in Arlington, Virginia. For tickets or more information, click here. The Oct. 13 performance will have sign language interpretation.