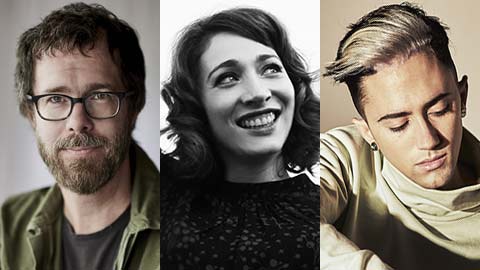 Ben Folds continues his “Declassified” series with a collaboration between the NSO, Regina Spektor & Caleb Teicher. Photo courtesy of the Facebook event page.

“We’ll pass it on to you, and you’ll blow us all away.” NSO Artistic Advisor Ben Folds continues his crusade to bring orchestral music to the masses with his concert series “Declassified,” presented by Ford.

For those readers who are unacquainted with Mr. Folds, he has made a long career as a musical chameleon. He is a singer/songwriter, music producer, and even a reality TV show judge on NBC’s “The Sing Off.” He first rose to prominence with the alt-rock band “Ben Folds Five,” scoring hits with songs like “Army,” “Song for the Dumped,” and their biggest mainstream success with the emotional “Brick.” After the (temporary) dissolution of the band, Folds launched a strong solo career; releasing albums such as “Rockin’ the Suburbs,” “Songs for Silverman,” and an amazing collection of his live performances “Ben Folds Live.”

…the performance was delightful and enjoyable at every turn…

Even before becoming an Artistic Advisor to the NSO, he has been deeply involved in orchestral music, playing with orchestras all over the world for 15 years. He also did an album with experimental chamber ensemble yMusic called “So What,” which included his own orchestral composition “Concerto.” It was with this experimental spirit he began the “Declassified” series, to show the versatility and dexterity of orchestral music.

Over the last several “Declassified” performances, Folds has married the NSO’s superior musicians with a plethora of interesting collaborators. Some of the most notable names are “The Late Show with Stephen Colbert” bandleader Jon Batiste, Cuban vocalist Danay Suarez, and singer/songwriter Sara Bareilles. This past Friday’s concert was another engaging amalgam, which included a tap-dance composition, an introspective look at how music has changed in the last 200 years, and a pop-orchestral collaborative debut.

The performance was opened by dynamic tap-dance performer Caleb Teicher, making a splash in a burgundy suit, bright white tap shoes, and a blond streak at the front of his dark hair. His tapping accompanied an orchestral piece played by the NSO, which acted as a kind of percussion to the piece. However, it wasn’t until Ben Folds emerged after the conclusion to the piece that we learned that it had actually been the debut of an original piece that had been orchestrated from Teicher’s tap performance.

Folds then welcomed the audience and proclaimed his love for the “Declassified” series. He feels it is a “safe” way into the symphony, but in a way that isn’t “dumbed down.” He then asked the audience to imagine what it must have been like before the advent of recording technology – people were only ever able to hear the songs of their day live when dozens of talented musicians came together. He then tied pop songwriting of today with songwriting of the past by having the NSO play a short composition based on the special guest of the night: Regina Spektor.

But before Spektor took the stage for her set, Folds welcomed pianist Simon Trpceski to the stage to join the NSO in Dmitri Shostakovich’s Piano Concerto No. 2 in F major, Op. 102 Allegro. Folds said he was “star-struck” by Trpceski, whose deeply expressive and accomplished playing has allowed him to collaborate with top conductors and orchestras from around the world. He was also a convivial figure, as he introduced the next piece played by the NSO, Aram Khachaturian’s “Waltz from ‘Masquerade’ Suite. As he had throughout the evening, conductor James Gaffigan led the NSO with a steady yet impassioned hand, navigating the different genres and mash-ups with ease.

Finally, the performance was closed with a performance by the spritely piano virtuoso and singer/songwriter, Regina Spektor. Spektor is an indie darling and has found a great deal of success with her unique and emotive compositions. She began studying piano at age 6, and has had her songs featured in a number of TV shows and films, most notably writing and performing the theme song for Netflix hit “Orange is the New Black.”

Folds and Spektor have been friends for a long time, and Folds admitted that when he first had the idea for this series, it was Spektor who came immediately to mind. While Folds has spent many years playing with symphonies, this was Spektor’s first time and you could tell she was a bit nervous. However, she had nothing to fear, as she and Gaffigan worked seamlessly together on some of her well-known songs like “Eet,” “Obsolete,” and “Sampson.” She demonstrated her usual quirky charm and was very endearing onstage. Playing with the NSO also accentuated her penchant for using mouth percussion and non-word sounds within her songs. At times her staccato sounds almost sounded like pizzicato from the strings. The NSO also played a classical piece of her choice, “Montagues and Capulets” from “Romeo and Juliet,” the Russian Ballet by Sergei Prokofiev.

Though it was not mentioned in the program, the audience was thrilled when Spektor and Folds did an encore of their amazing collaboration from the “Hamilton Mixtape,” and performed “Dear Theodosia” for the crowd. It brought the house down and earned a standing ovation.

While the performance was delightful and enjoyable at every turn, that was not all “Declassified” had to offer. Audience members were encouraged to arrive early, and there was a traditional Russian band that performed before the show, free beer tasting from Port City Brewing, and a photo booth that allowed audience members to have a fun souvenir of the night. But perhaps the most fun was after the show when live karaoke band Hari-Karaoke allowed audience members to take the Kennedy Center’s Millennium stage and make some music of their own.

While this chapter of “Declassified” has closed, this reviewer strongly recommends for you to attend the next one – it is a fantastic way to introduce yourself to new and innovative musical styles while having a blast.