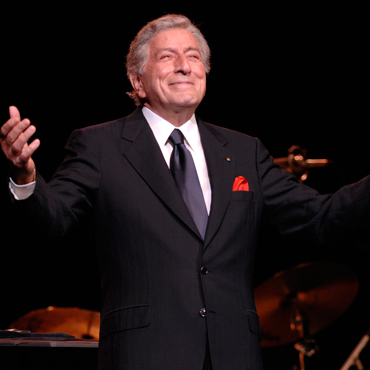 More than six decades of music and 19 Grammy awards really sums up the icon that is Anthony Dominick Benedetto known to the world as Tony Bennett. A night with this charming crooner reminds us how simplicity and talent are ageless. As is he apparently; now 92 years of age and still touring.

Meyerhoff Symphony Hall is one of my favorite venues in the Baltimore area and always very acoustically flattering for vocalists. Bennett’s touring quartet kicked off the show warming up a full house at the Meyerhoff. The band includes pianist Tom Ranier, guitarist Gray Sargent, bassist Marshall Wood, and drummer Harold Jones. Each quartet member was featured throughout the show with Tony Bennett addressing each musician in showing off their skills.

Antonia Bennett, daughter of Tony Bennett and Sandra Grant was next to hit the stage much to the delight of the audience. Since the age of four years- old Antonia has been performing alongside her father with her pure timeless looks and voice. As a recognized jazz singer her voice gives hints of Billie Holliday accompanied with a safe performance, receiving a warm welcome from theatergoers.

I was given the album “Steppin out” as a birthday gift when I was a teenager. This tribute to Fred Astaire started my musical love affair with Tony Bennett. Who would have thought that years later I would be reviewing his show for the Maryland Theatre Guide? A music video for “Steppin’ Out with My Baby” received airplay on MTV. I remember feeling cool because I owned the album, remember the days when MTV played music videos?

There is no greater compliment as a singer than being introduced by the voice of Frank Sinatra. Sinatra called him “the greatest singer in the world,” it was then that Tony Bennett hit the stage. Bennett belted out the songs that have made him a household name for decades from “Watch What Happens,” “I Got Rhythm,” “Steppin’ Out with my Baby,” culminating with a “Fly to the Moon: finale.” I lost count of the number of standing ovations throughout the 90 -minute show. It is obvious that despite a little loss in lung power and range at times Tony Bennett continues to be loved by audiences.

The World War II veteran who has performed for 11 presidents used his music and the occasional gesture to relate to his devoted audience. There were spurts of applause that perhaps for a younger performer wouldn’t have been witnessed. It was the simplest of humor and musical moments that were appreciated by a devoted audience for an icon who is still flying across the country and performing in his 90’s.  Following Baltimore, Bennett heads back to California for three shows.

Despite the large venue, the lighting was very subtle, changing background scenes provided rich and vibrant colors reminiscent of a jazz club. An inviting ambiance providing an intimate feeling.

I wasn’t surprised to see multiple generations Bennett’s audience all who seemed to revel in the fact that this musical legend had made it to our small corner of the world here in Baltimore.

His movements were few on stage and his outstretched arms after every song showed that Tony Bennett still has the same love affair with his music that he had in his 20’s. After 57 albums, 11 live albums, 31 compilation albums, and 81 singles it’s safe to say for Tony Bennett the music will always keep playing.

In a recent interview with www.Philly.com, when asked why he was still hitting the stage at 92 he simply replied: “Why not ?”

For more information on upcoming performances with Tony Bennett click here. For upcoming shows at the Meyerhoff click here.