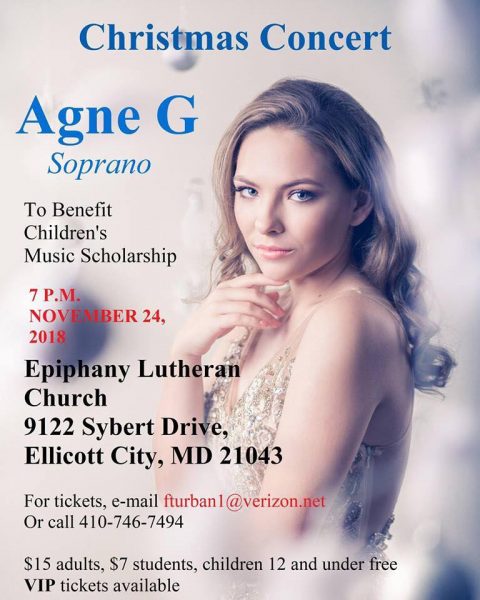 Agne G. from Chicago will be performing the only East Coast appearance of  her Christmas concert tour for her newly released CD, “Merry Christmas from My Heart,” at Epiphany Lutheran Church, 9122 Sybert Drive, Ellicott City (Columbia Hills), Maryland 21043. At seventeen years old Agne is already internationally recognized as one of the outstanding classically trained voices in the classical/crossover genre. As early as nine years old she was winning awards in contests in the Chicago area. At the age of twelve she placed second on NBC’s “Steve Harvey Show,” placed first at Chicago’s Rialto Theater’s Junior Idol contest, and placed first at Carnegie Hall’ s American Protégé award in the category of “Broadway and Classical” music.

In 2016, at the Romanian TV Talent show, “Music for Kids,” Agne was given the award of Grand Champion of the Pop Opera category. Agne is being recognized by the musical community in that she has sung as guest performer with The Sicilian Tenors, Michael Castaldo, Marisa Johnson, The Irish trio “The Priests,”  and is headlining the opening Christmas Concert at the Rialto Square Theater, Joliet (Chicago), Illinois. Born in Lithuania Agne has become a principal soloist not only for Lithuanian music events in Chicago but also with national music events in Lithuania. Baltimore can be proud that it held Agne’s first headlining concert in 2016.

Now Agne returns to headline her second Christmas concert in a small but beautiful venue at Epiphany Lutheran Church. She will be joined by three local talented young people as guest performers. This is a part of a program to encourage young people to continue to develop their musical talents. The concert is a benefit for the Agne G. Music Scholarship fund of the MusicLinks Foundation. This event will begin your Christmas season. A reception will follow at which you will be able to meet Agne.