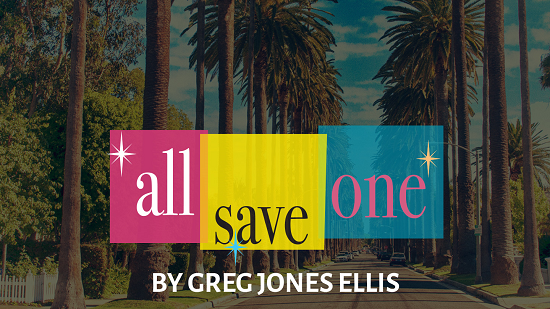 Washington Stage Guild Presents World Premiere of All Save One

Nov. 2, 2018: The Washington Stage Guild presents the world premiere of All Save One by area playwright Greg Jones Ellis. Set in Hollywood 1950, this witty comedy-drama reveals what goes on behind closed doors when a world-famous writer, his actress wife and his longtime “secretary” arrive from England, only to have their comfortable household disrupted by the arrival of a handsome young priest and a film producer with a secret of his own. Add a malicious young blackmailer, and this glimpse into how Hollywood dealt with private lives is by turns darkly funny and emotionally powerful.  All Save One opens Thursday, Nov. 15 and runs through Sunday, December 9. NOTE: There is no performance on Thanksgiving (Nov. 22), but there is an added matinee performance on Friday, Nov. 23 at 2:30 pm.

Leading the cast is Washington Stage Guild founding member Bill Largess as the beleaguered writer.  A five-time Helen Hayes Award nominee, Largess is well known to DC audiences for his many roles at WSG along with nearly all area professional theaters. He was most recently featured in the title role of Elling at WSG. Joining Largess as the writer’s flamboyant actress wife is WSG founding member Laura Giannarelli.  Recipient of the Mary Goldwater Award from Theatre Lobby and an Alexander Scourby Award from the American Foundation for the Blind for her audiobook narration, the versatile Giannarelli’s most recent roles range from the meddlesome Kentucky mother in last season’s See Rock City to the supernatural Oracle in Shaw’s epic Back to Methuselah. R. Scott Williams plays the writer’s erstwhile lover and acid-tongued “secretary.” Williams returns to the DC stage after creating the role of Ira in Boys of a Certain Age, a role that earned him a New York Innovative Theatre Award nomination.  Local audiences have seen Williams at the Shakespeare Theater, Olney Theater Center and the Kennedy Center in addition to appearances with WSG.

Rounding out the cast are Lawrence Redmond as the new rival for the wife’s affections and Danny Beason as a well-meaning but insecure young priest. Two-time Helen Hayes Award winner Redmond returns to the WSG stage after playing Sartorius in Shaw’s Widowers Houses last season. Previous company appearances include roles in It’s a Wonderful Life: A Live Radio Play, An Inspector Calls, The Play’s the Thing and as Konstantin Levin in Anna Karenina, for which he was honored with a Mary Goldwater Award. Newcomer Danny Beason is a recent graduate of Catholic University’s Drama Department. While pursuing his degree in acting, Beason played the steadfast Allen in Picnic and various roles in Timberlake Wertenbaker’s The Love of the Nightingale.

All Save One is directed by Carl Randolph.  Director/choreographer/actor Randolph is an Artistic Associate of the Washington Stage Guild making his company directing debut. Directing credits include regional productions of A Chorus Line, My Fair Lady, Guys and Dolls and Terra Nova. He is also the producer, writer and director for the film Never Dream: The Beginning.

The set, a beachside mansion, is designed by Carl Gudenius, Kirk Kristlibas and Jingwei Dai. WSG Resident set designer Carl Gudenius has designed many sets for WSG, along with many other DC theater and such television assignments as Art Direction/Production Design for ABC’s Good Morning America and Nightline), C-SPAN, PBS’s In Performance at the White House), and The Discovery Channel. Jingwei Dai holds an MFA degree from George Washington University with a focus on production design. He was the set designer for Last Train to Nibroc in 2017 and co-designer with Kirk Kristlibas for Alabama Story in 2018. Kirk Kristlibas holds an MFA in production design from GW. Previous designs for the Stage Guild include Inferno and Tiny Island.

The costumes, inspired by Golden Age of Hollywood, are designed by Reema Al-Bawardy, a newcomer to WSG. Sound design is by Frank DiSalvo, Jr., whose last work for WSG, with collaborator Steven Carpenter, was It’s a Wonderful Life: A Live Radio Play, nominated for a Helen Hayes Award.  WSG resident lighting designer Marianne Meadows, a multiple Helen Hayes nominee, will capture the unique California sunlight.

Local playwright Greg Jones Ellis was awarded a 2017 Julie Harris Playwriting Award from the Beverly Hills Theatre Guild for All Save One. Other plays include Divinity Place, a comedy set during World War II based on his parents’ wedding and the contemporary comedy Culver City Fever, which was recently performed as part of the 2018 Kennedy Center Page-to-Stage New Plays Festival.  He is also a published scholar, writing primarily about cinema and theatre.

“This play has lived with the Washington Stage Guild from first draft to full production” says Artistic Director Bill Largess. “Many of us have participated in workshop readings, as the playwright sharpened the sparkling repartee and deepened the play’s very poignant depiction of lives led in fear of exposure. Now Washington area audiences can see it come to full life for the first time anywhere.”

2018-2019 Season Passes are still available. Each pass gives the recipient four admissions that can be used any way: all four at once; two for one show, two for another; or one for each production.

Tickets for the 2018 Gala, “An Affair to Remember,” to be held Thursday, Nov. 8, can be purchased via the Washington Stage Guild website. A part of the ticket price is a tax-deductible contribution. For more information, visit https://web.ovationtix.com/trs/pe.c/10333646.