Opera Review: Rossini’s ‘The Barber of Seville’ by Annapolis Opera at MD Hall for the Creative Arts 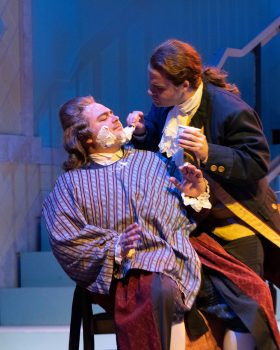 “The Barber of Seville” at Annapolis Opera. Photo courtesy of AO.

And so Bugs Bunny, “The Rabbit of Seville” posing as a barber on the operatic stage, rubs the hair tonic “Figaro Fertilizer” on Elmer Fudd’s baldpate, and the latter reacts in comic fury when he realizes he grows not hair but sprouts flowers.  Or: Bugs Bunny, again on center stage,  conducting a hapless opera singer in the Hollywood Bowl,  who sings apoplectically with shrinking head: “Figaro, Figaro, Figarrrro” Or: Tom the cat singing his same aria as Jerry the wily mouse undermines his efforts. The use of “The Barber of Seville” in manifold cartoons such as these testifies to the popular melodic nature of Gioacchino Rossini’s opera, but perhaps few suspect that this opera contains as much fun and frolic as these animated antics!

…Purcell  sang with comedic style combined with beauty of timbre.

Written in the “opera buffa” style, the plot is simple yet involved:  Figaro (Scott Purcell) is the Barber of Seville, a popular scamp who helps his friend Count Almaviva (Jonas Hacker) woo lovely Rosina (Hannah Ludwig), in order that she not marry her decrepit and tyrannical guardian, Dr. Bartolo (Brandon Hendrickson).   The Count then appears in various acts in diverse guises, including as a drunken soldier and a music teacher, that he may come into contact with Rosina.

The light, free spirit of Rossini’s music and plot was enhanced in the early November production directed by Braxton Peters and conducted by Ronald J. Gretz at the Annapolis Opera as the curtain went up to reveal pleasing pastel sets and bright lighting, slightly suggestive of the sunny world of the romanticized Italian street.   The props were turned around for later sets to unfold an elegant sitting room in which the comedy and combined voices – duet, trio, quartet, quintet and sextet – would ring forth.

Body language added greatly to the humor of the performance.  Scott Purcell as Figaro “is laugh-out-loud funny!” exclaimed my neighbor in the seat next to mine.  And his voice! In the Figaro aria “Largo al factotum della città” – this is the one where he sings of himself in the third person:  “Figaro, Figaro, Figaro – Figaro here, Figaro there, Figaro up, Figaro down” – Purcell  sang with comedic style combined with beauty of timbre.

“Una voce poco fa”  (“A Voice Just a While Past”), always one of the most lyrical parts of this opera, was performed masterfully by Hannah Ludwig as Rosina.  She also brougt to the part abundant body language and charm.  A true surprise is a brilliant aria (“Il vecchiotto cerca moglie”) by Kylena Parks as the old governess Berta, in this interpretation not so old and with a powerful voice to remind us of many an old fool this world determined to marry.

Something should be said of the English translation used in the surtitles, which employed Italian words like bravissimo and cognates between Italian and English  – where most translations use “slander” for calunnia, for instance, this translation uses the cognate “calumny.”  Thus, the viewer gets a bit of the feeling of the original language of the opera through Italian words or words which sound close to the Italian original.   The orchestra and acoustics are excellent, especially given that the venue is a formal school not designed with classical acoustics in mind.

On a closing note, perhaps one should think of nineteenth-century operas like movie adaptations of great books and plays in our own day.  Rossini’s opera is an adaptation of the play of the same name, “The Barber of Seville: or, The Useless Precaution” (a subtitle mocked at several points in the opera).  The play’s author, Pierre Beaumarchais, has an interesting story in his own right, as he procured funds in support of the American War of Independence, even before France proclaimed itself officially an ally of the United States.  Perhaps one day someone will write a comic opera about this!  In the meantime, a performance of “The Barber of Seville” is always welcome, and this opera is sure to be performed again soon in the Washington metropolitan area.