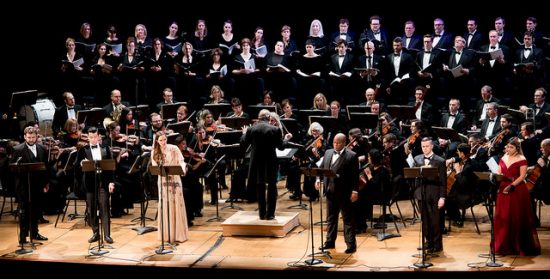 The Lisner Auditorium was packed to the brim Sunday night with opera-goers eager to hear the rare performance of Gounod’s first opera “Sapho.” Despite clearly being his first operatic attempt, “Sapho” has thrilling musical moments that harken to Gounod’s future, more well-known operas including ‘Faust’ and ‘Romeo et Juliette.’ This Greek tragedy follows the poet Sapho and her doomed love of Phaon. Distinguished by their mission to produce rarely performed operatic masterpieces, Washington Concert Opera kicked off its 2018-2019 with this stunning work showcasing some of opera’s most promising young talent.

It is 6th century B.C. on the island of Lesbos, Phaon finds himself torn between his former mistress the beautiful courtesan Glycère and the enchanting young poet Sapho. Sapho arrives, and his decision is easily made. Bouyed by Phaon’s undying love and support, Sapho wins the Olympic poetry contest with her retelling of Hero and Leandre. Following Sapho’s victory, Phaon, his friend Pythéas, and her rival poet Alcée plot to kill the tyrant Pittacus and Phaon is chosen to carry out the murder. Glycère, enraged by Phaon’s rejection of her, plots her vengeance against Sapho by wooing Pythéas into giving up evidence incriminating Phaon in the murder conspiracy. She then uses this evidence to force Sapho to reject Phaon and encourage him to flee the country with Glycère instead. Terrified of being discovered, but in disbelief of Sapho’s rejection, Phaon agrees to leave the country with Glycère surmising that Sapho must have never loved him in the same way. Heartbroken, Sapho is unable to carry on without Phaon and ends her life by leaping into the fathoms of the sea.

As always, Washington Concert Opera procured exceptional talent for their “Sapho” cast, not only in vocal technique but in acting chops as well. Addison Marlor’s smooth tenor voice and dynamic finesse easily captured Phaon’s emotional journey from tender lover to would-be murderer to eventual curser. In regard to stage presence, Marlor did seem to lack the same embodied storytelling ability as most of his castmates, but this could also be attributed to the challenge of concert opera. Amina Edris was the perfect casting choice for Glycère, from her alluring soprano voice to her commanding red dress, you knew from the moment she stepped on stage that she would go to any length to exact revenge on Sapho.

Rising mezzo Kate Lindsey was a picturesque Sapho, from her shimmering one shoulder gown to her air of mystery, her thrillingly rich timbre captured Sapho’s strength and tenderness with the acumen of a seasoned performer. While her characterization initially lacked nuance, her emotional journey peaked with her final aria “O ma lyre immortelle” where she laid feelings bare and threw herself into the sea. Musa Ngqungwana was outstanding in the role of Pythéas, his impressive bass voice and stature lending strength to Pythéas despite his ultimate betrayal. A surprising showstopper ended up being baritone Brian Vu in the role of Alcée. His seemingly effortless vocal production was perfectly paired with his impeccable characterization and his glorious baritone voice left the audience wanting more.

Antony Walker conducted the capable WCO orchestra with grace and aplomb, leading them in expressive phrasing that painted the picture of the isle of Lesbos and the raging sea. Rehearsed by David Hanlon, the chorus offered a well-balanced sound and eager engagement with the story. Several chorus members sang smaller roles quite impressively including Meagan Sill as Corphée, Andrew Bawden as Cratés, and Ethan Green as Cynégire.

Once again, Washington Concert Opera has managed to bring to life a rare masterpiece with such exquisite talent as to make us wonder why it ever fell out of style in the first place.

Running Time: 2 and a half hours with a 20-minute intermission.

This production had only one performance on Sunday, November 18th. However, if you have a predilection for more obscure operas from the bel canto era, be sure to check out WCO’s production of Rossini’s “Zelmira” coming April 5th! Click here for more information.