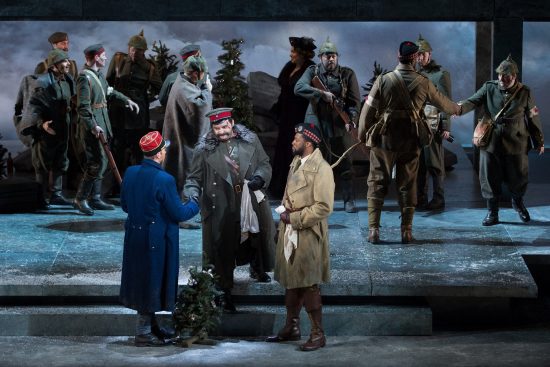 “War is not sustainable when you come to know your enemy as a person.” This profound statement is the guiding truth behind Kevin Puts’ and Mark Campbell’s Pulitzer Prize winning opera, “Silent Night.” A retelling of the 2005 film “Joyeux Noel,” this opera brings to life the true story of an impromptu Christmas ceasefire between French, German, and Scottish troops fighting on the Western Front. This past Sunday marked not only Veteran’s Day but also the 100th anniversary of Armistice Day, the day World War I officially ended.  And on the eve of this historical occasion, surrounded by an audience that included ambassadors from countries that fought in the first world war, WNO’s production of “Silent Night” hit home with a staggering force that left us all in tears of awe and reverence.

Three major storylines intersect across the same battlefront. Two brothers, Jonathan and William Dale enlist in the Scottish army to fight for freedom and glory. William dies, leaving Jonathan to bitterly mourn the premature loss of his older brother. Lieutenant Audebert, leader of the French troops, is dealing with personal conflictions between his duty to serve and the wife he left behind pregnant with their first child. Renowned opera singer, Nikolaus Sprink, is drafted into the German army against his will and forced to leave his lover, Anna Sørensen. The different groups are brought together when their leaders take a risk and proposes a ceasefire for the sake of Christmas. This daring move resulted in sworn enemies gathered around the same fire as friends, laughing, drinking, and sharing mementos from home. Although peace prevailed for only one silent night, its lasting impact was felt by all long after the war was over.

Rare as it is to see an opera comprised primarily of men, it was also quite special to have such a large and talented cast comprised almost entirely of current members and alum of WNO’s distinguished Domingo-Cafritz young artist program. Alexander McKissick, a current WNO young artist, portrayed Nikolaus Sprink with the perfect balance of apprehension and confidence that you would expect from an opera singer turned soldier. His lovely counterpart, Raquel González, brought utter passion and joy to the role Anna Sørensen, imploring Nikolaus not to leave and insisting on joining him at the battlefront. Her unaccompanied Latin hymn at the Christmas Eve service drew the audience in and wrapped us in her shimmering tones. Arnold Livingston Geis as Jonathan Dale was utterly believable in his initial adolescence all the way through his transition to bitter Scott. He kept the audience on edge, and we were convinced that a shot from his rifle would end the ceasefire at any second. Also of note were commanding baritone, Aleksey Bogdanov who deftly captured the stern, yet sensitive Jewish German Lieutenant Horstmayer and local tenor, Patrick Cook, who lent an overt opulence to the Kronprinz. Under the direction of Tomer Zvulun, this talented cast of singing actors brought true depth to these diverse characters.

No stranger to “Silent Night,” Conductor Nicole Paiement led the WNO orchestra expertly through Puts’ newly re-orchestrated score and brought this operatic treasure to life with arresting poignancy. The technical aspects of this production were also top notch. The three-level set designed by Erhard Rom, though quite simple, allowed for easy transition between scenes and insight into life on the battlefield. Most striking where the old-fashioned holiday postcards projected onto the scrim that were reminiscent of frame transitions of old movies from that era. Dirty, faded uniforms designed by Vita Tzykun spoke to the weary spirit of these troops that so desperately needed a break from the tension of battle.

From start to finish, “Silent Night” is nothing short of a stellar production whose timing is just right. Now, more than ever, we are needing to recognize our similarities over our differences and “Silent Night” goes a long way in pointing us in the right direction.

Running Time: 120 minutes with a 25-minute intermission; a post-performance talkback with the artists will follow each performance.

Parental Advisory: Silent Night contains violence that might not be suitable for young children.

“Silent Night” is playing at The Kennedy Center in Washington, D.C. through November 25, 2018. For tickets or more information, click here.