Theatre Review: ‘A Christmas Story’ at Arts on the Green 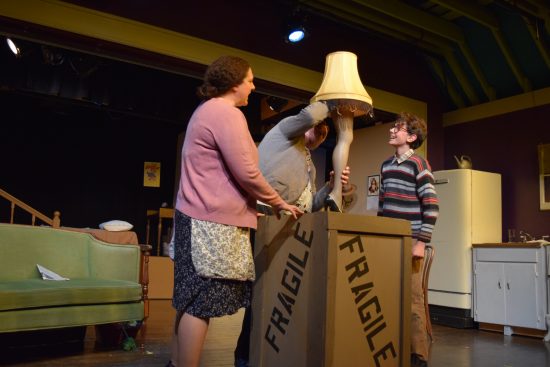 It’s the holiday season and that means Christmas themed stories galore. Such as the classic retelling of Jean Shephard’s “A Christmas Story,” which found much cultural fanfare from the 1983 film and endless TV plays every year since. This story takes generations of Americans back to a simpler time –like sledding in the snow with friends, first crushes, shopping for Christmas trees with the family, double and triple-dog daring friends to stick their tongues on frozen poles, and, of course, avoiding the dreadful bully. Everyone in this story has a Christmas wish, even if it isn’t finding a Red Ryder air rifle under the tree on Christmas morning.

Take the kids, take the whole family. It’s too much Christmas fun to resist.

It was such a delight to be in the Rockville Little Theatre with kids and older folks alike. I could feel the electricity in the air and anticipation building, especially as gullible Flick (Malcolm Friel) approached the frozen metal pole. While this story has many colorful characters, it centers around Ralphie (Logan Baker) and his obsession with convincing his parents to buy him a Red Ryder BB gun for Christmas. Ralphie has his father’s single-mindedness, whose propensity for creative swearing is matched only by his ecstatic aspiration to win a crossword puzzle contest. Ralphie’s father, affectionately referred to as “Old Man” (Dean Fiala), is ultimately rewarded for his puzzle aptness –with the help of his wife (played by Cassandra Redding). He learns of his major prize in a letter, which turns out to be a lamp in the shape of a sexy woman’s leg. Old Man’s fervent enthusiasm for the leg lamp mustered some humorously innocent jealousy from his wife and I heard some muffled chuckles around me, so I know I wasn’t the only one who could relate.

As picturesque as things might seem for Ralphie Parker, life is still a mountainous struggle, from a nine-year-old perspective, of course. Dealing with an infamous bully, a short-fused Dad easily set off by the old furnace, a mother that punishes him with soap in his mouth, a teacher oblivious to his genius, and an endless stream of school drama is a big deal for a kid. I thought Ralphie’s interactions with each set of characters throughout the performance was telling of his narrow focus, but also highlighted everyone else’s narrow focus as well. This small, but important aspect of the story recurred throughout the play and is perhaps a reminder of people’s tendencies no matter what year we’re in. Whether or not this was the playwright’s intention I can’t say for sure, but it makes this story all the more memorable.

The audience was lead through this story by the narrator, which was the enthusiastic grownup Ralphie Parker (Jim Camlek). The narrator had an adolescent resonance in his hyperbolic deliverance –in addition to multitasking in several roles, including the Christmas tree salesman. I especially liked his over-the-top backstory of the relentless bully, Scut Farkas (William Bouley). The cast of this production did an exceptional job of keeping the flow of the story at a steady pace. The kids surely took center stage in this performance, but the adults and kids alike were incredibly fun to watch. I was especially impressed with Bouley’s portrayal of Scut Frakas, as he reminded me of a playground bully I once knew. There was an expectation of chemistry between the adults in this performance, and certainly Fiala and Redding as the parents were notable, but the chemistry between the child actors was surprisingly evident. Nick Griffith as Randy and Zachary Rittenhousesmith were fantastic in their supporting roles in fusing the circle of school friends.

The setting was as fairly humble as one might imagine a yesteryear Indiana home would look like.  Much credit goes to set designer Bill Brown for the authentic ambiance, costume designer Laura Andruski for the throwback appearance, Mandy Mossman, make up artist, stage manager Aaron Skolnik for keeping the show flowing seamlessly, and, of course, director Ken Kemp for piecing together this enjoyable performance. Take the kids, take the whole family. It’s too much Christmas fun to resist.

“A Christmas Story” is playing now the Gaithersburg Arts Barn through December 9, 2018. For more information and to purchase tickets, please visit their website by clicking here.