Theatre Review: ‘All Save One’ at Washington Stage Guild 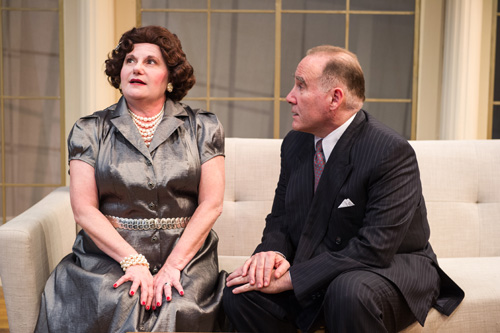 Laura Giannarelli as Claire and Lawerence Redmond as John Grant in the world premiere of ‘All Save One,’ now playing at Washington Stage Guild. Photo by C. Stanley Photography.

Cozy is a word that comes to mind when watching this world premiere by Greg Jones Ellis. While the play does attempt to tackle some big subjects — homophobia, sexism, ageism, religious conversion, McCarthyism – setting it in 1950 also imbues it with a warm, nostalgic glow. It’s sort of like watching a live performance of a half-remembered movie on the Turner Classic Movies channel—it might have seemed rather daring in 1950, but there’s a safe distance now.

“All Save One” concerns the beginning of the McCarthy era in America, with an in-the-closet (he thinks) gay writer and his secretary/lover (also gay), the famous actress the writer is married to, a producer (in love with the wife of his writer) who is being called to testify in Washington, and a young, handsome priest (deeply in the closet and fighting his nature). All have secrets, all have something to lose; all are being blackmailed by the unseen character, Clay, who was for a time the younger lover of the writer, and who now spends his time howling on the beach apparently. The story is set in California, in Hollywood.

This is a witty crowd, and late middle-aged, so they are facing threats to their livelihoods and their relevance. They mostly meet the dangers with a well-timed quip or barb, but reality does have a way of pushing in. A well-timed bon mot doesn’t feel so comforting when you’re looking at the back side of 50 with a destroyed career.

Some of the plot points seem forced. For example, the very handsome young priest, Father Theodor (Danny Beason), is thrown into the mix not only for the spiritual conversion to Catholicism of Sims the writer (Bill Largess), but also to provide, presumably, the real reason for Sims’ conversion fever—his lust for the young man—only Sims isn’t that self-aware. This is a hard sell to an audience about a character with a decades-old understanding with his wife about their “marriage” and openly lives with an ex-lover turned secretary. The point of the play overall may be to 1) pay homage to the generation that faced prison and ostracism for being nonconforming, 2) and to point out that there is still much work to do. However, overall the religious conversion, when there is already a McCarthy hearing on the horizon, felt like too much piling on.

This is a nostalgic piece done very well. The set is mid-century modern for the most part with a dash of antiques thrown in, and the costumes are perfect for the era. Many of the jokes and witticisms referenced older cultural knowledge; I’m not sure how many people under AARP age will actually get a reference to Errol Flynn and his legendary skirt-chasing, among others.

The actors (Bill Largess as Sims; R. Scott Williams as Basil; Laura Giannarelli as Claire; Lawrence Redmond as John Grant; and Danny Beason as Father Theodor) slide into their parts with ease. Their comedic timing is spot on; any issues with parts seems more to be with the script. When Bill Largess suddenly roars in anger about someone mocking the Catholic Church it feels rather forced, and you have to remind yourself that oh, yes, he’s converting. Maybe.

Of exceptional note is R. Scott Williams’ Basil, the amanuensis (his term) as Sims’ long-time companion and champion and fixer. He uses his voice like a precision instrument; when needed, he drops the airy, witty veil and speaks with a suave menace that is chilling. He is at once the most clear-eyed among them about the potential consequences if their secrets ever come out and the only one willing to believe in love. It’s a lovely performance as his underlying gravitas grows on you.

The first act seemed to meander a bit, while the second act zipped along quite nicely. World War II was invoked several times; it was a heavy-handed reference to current affairs because as Basil says, “Who says we are not behind enemy lines now?” But overall, the play is light and warm and cozy; you just know things are probably going to turn out okay at the end.