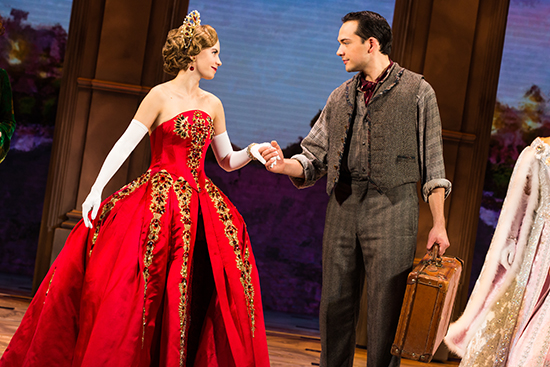 Lila Coogan (left) as Anastasia and Stephen Brower as Dmitry in ‘Anastasia’ at The Kennedy Center.

“Anastasia the Musical” may have roots in a dark and turbulent historic event, but at its heart, it’s simply a princess story — and an enchanting one at that.

Those familiar with the 1997 animated musical fantasy film — one of the two 20th Century Fox pictures on which the musical is based — will know better than to expect historical analysis or a deep, meaningful plot. But, oh, how the glitter and the grandiosity of the sets, the costumes, and the lighting design make this family-friendly musical worthwhile.

The opening scenes of “Anastasia” depict the opulence of Imperial Russia before the rise of the Soviet Union, and they’re beautiful — until the red flares of light in the windows give way to explosions, gunshots, and chaos as the Romanov family meets their maker. It’s a stunning visual.

From there, the plot unfolds. There are rumors in St. Petersburg that Princess Anastasia has escaped the firing squad. (Spoiler alert: In real life, she never made it out of the palace walls alive) This leads two lovable scoundrels, Dmitry and Vlad (Stephen Brower and the delightful Edward Staudenmayer, respectively), to hatch a plot to scam the Empress Dowager (Joy Franz) out of the Romanov inheritance by training a street girl to emulate the princess. It doesn’t take a lot of leaps and bounds to figure out where the plot goes, but you didn’t expect it to be complex, did you?

That street girl, Anya (Lila Coogan), conveniently suffers from amnesia, making her the perfect pawn in Dmitry and Vlad’s game. Coogan’s vocal prowess is something to be admired, but she lacked nuance in the role. In one of the musical’s most well-known songs, “Once Upon a December,” I wanted to hear a wistful, nostalgic tone, but instead she displayed an incredibly impressive belt. Now, it’s worth noting that the National Tour of “Anastasia” is brand-new — it debuted in New York in early October — so Coogan may find that balance yet.

How the glitter and the grandiosity of the sets, the costumes, and the lighting design make this family-friendly musical worthwhile.

The 1997 movie is rightfully billed as an animated musical fantasy film in which Rasputin is stuck in Limbo because he didn’t finish the job of eliminating the whole royal family. In the musical, this fictional storyline been replaced entirely by the character of the Bolshevik Gleb (Jason Michael Evans) as the villain who, according to the script, is out to kill Anastasia. Yet, his role in the musical falls short — despite Evans’ vocal talent — as it never really feels like Anya is in peril by his constant lurking a few steps behind her.

Yes, there’s a lot of heavy subject matter in this princess tale. Let’s talk for a minute about Vlad and Countess Lily (Tari Kelly), who served as the comic relief of the show, particularly in the second act. Kelly has an impressive Broadway resume, a remarkable voice and no fear of physical comedy. A duet between the two is a hilarious high point of the performance.

The scenic design by Alexander Dodge is overwhelming but in a good way. There’s one caveat, though: An impressive yet overwhelming LED screen fills the back of the stage, and it’s an effective way of setting the scene—until it’s not. Here’s the question: Can a professional become too technologically advanced, blurring the line a bit too much between cinema and stage? I can’t decide, and it might boil down to each person’s individual preference.

The musical includes six songs from the animated movie, as well as a dozen-plus new ones written by the original team, Stephen Flaherty and Lynn Ahrens. “Anastasia,” despite what some might think, doesn’t have any ties to Disney, but it sure does nail that humble princess story that Disney does so well — and it’s a beautiful journey to the past.

“Anastasia” runs through November 25, 2018, at The John F. Kennedy Center for the Performing Arts, located at 2700 F Street NW, Washington, D.C. 20566. For more information and to purchase tickets, visit The Kennedy Center website.