Theatre Review: ‘As You Like It’ at the Keegan Theatre 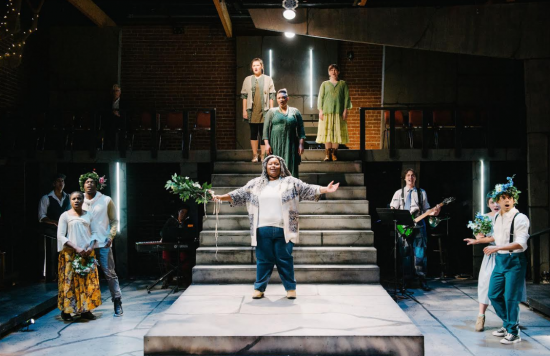 Members of the cast of “As You Like It” at the Keegan Theatre. Photo by Cameron Whitman.

The Keegan Theatre’s production of Shaina Taub’s new musical adaptation of Shakespeare’s “As You Like It” is as close to perfect as any production that has appeared in Washington this year. Every element works, and all work well together.

Directors Cara Gabriel and Josh Sticklin make effective use of the Keegan’s intimate, rustic space, utilizing a spare set by Matthew J. Keenan and the entirety of the theatre to create an immersive 90 minutes. The dim lights and cavernous space lend themselves well to the forest setting, with performers appearing from the back of the house and the narrow upper balcony, as well as from below and behind the main playing space.

…“As You Like It” is as close to perfect as any production that has appeared in Washington this year.

The stark set contrasts effectively with Jeanette Christensen’s acid trip costumes, all bold, shiny colors and patterns topped off with hairstyles sculpted by Craig Miller. The show would be worth a look just to see the actors in their outfits — though every member of the cast is outstanding.

Taub and co-adaptor Laurie Woolery have imagined Shakespeare’s Forest of Arden as less exile than Eden, a come-as-you-are commune reminiscent of utopian communities of the 1960s. This show celebrates differences — the cast is multi-ethnic, some roles have been cast gender-blind, and others gender-swapped. It’s a clever wink at Shakespeare’s cross-dressing conceit; yes, Orlando loves Rosalind and does not know that the “boy” Ganymede is his lady love, though in this production, it would be just as likely to have Orlando and Ganymede live happily ever after as two men.

The language of the show’s book is almost entirely from Shakespeare’s original text – one running joke has Jaques (an excellent Caroline Dubberly) interrupted repeatedly when about to deliver the play’s most famous monologue – while the music is modern and explores a wide array of styles. Standouts include the full-cast “In Arden,” Jade Jones’s hypnotic “Under the Greenwood Tree” as Duke Senior, and Debora Crabbe’s haunting “When I’m Your Wife,” where Rosalind exposes the realities of a lifelong love to the romantically pining Orlando.

There is not a single member of the large cast who does not serve plaudits. In addition to the principals, Patrick M. Doneghy as a foppish Duke Frederick, Phillip Reid’s surprisingly sensitive Touchstone, and Caroline Wolfson’s wide-eyed, tomboyish Silvia are among the brightest lights. And if this fine cast did not already have enough to do, “As You Like It” is an actor-muso production, with many cast members playing instruments in between their own scenes.

Taub and Woolery have created this adaptation for audiences that are already familiar with Shakespeare’s original; someone who had not seen that subplot-packed play in its original form might get a bit lost in these woods. And those who are not big fans of the possibility of interacting with performers should opt for a seat toward the back. (On-stage seating is available, and recommended for those who are up for it.)

“As You Like It” runs through December 2, 2018, at the Keegan Theatre, 1742 Church Street NW in Washington. Click here for tickets.