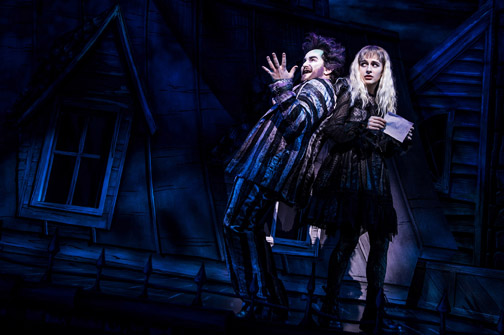 Alex Brightman as Beetlejuice and Sophia Anne Caruso as Lydia in BEETLEJUICE. Photo by Matthew Murphy, 2018.

The new musical, “Beetlejuice,” based on charmingly quirky 1988 movie with Michael Keaton as the title character and Tim Burton as the director, is making its pre-Broadway run at the National in Washington, D.C. The production is a fast-paced, visual feast, thanks to the top-notch, award-winning creative team. Director Alex Timbers (“Rocky”) gives the show a high-octane energy. The musical is blessed with rich, detailed costumes by the legendary William Ivey Long; the gorgeous lighting effects of Kenneth Posner; the stunning and massive, proportionally skewed sets of designer David Korin; and the energetic choreography by Connor Gallagher. A big hand goes to the ensemble for their talent, hard work and stamina.

The music and lyrics by Australian Eddie Perfect are generically fun, some reflecting the current teen, pop scene. He also includes lovely ballads that, at times, feel like another musical altogether.

The talents of Rob McClure as Adam and Kerry Butler as Barbara are sorely wasted. As the Maitlands, they are the ghosts of the recently deceased couple trying to rid their house of developer Charles (Adam Dannheisser) and his daughter’s life-coach (and his new lover), Delia (Leslie Kritzer). Dannheisser and Kritzer seemed to be fan favorites and well deserved – they have great comic timing and vocal talent.

For the musical, the writers have chosen to make the “bio-exorcist” and miscreant ghost, Beetlejuice or Betelgeuse (“School of Rock’s” Alex Brightman), and Lydia (the powerhouse Sophia Anne Caruso) the focus of the musical, shifting from the Maitlands. The character of Otho (Kelvin Moon Loh) – the snobby decorator in the film – has been transformed into an over-the-top life coach and guru. Standout performances of note are the perky Dana Steingold as the Girl Scout with a weak heart and the brilliant Jill Abramovitz in her dual roles as Maxine and the Netherworld’s Mrs. Shoggoth.

Charles’ daughter, Lydia, is not just going through a teenage Goth phase. Unlike the film, she is genuinely mourning the death of her mother six months earlier and feels invisible to her father. She is the only one who can see Adam and Barbara, who think of her as the daughter they never had. When Beetlejuice (with his own agenda to come back to life), and Lydia partner to scare her father and Delia out of the house, their relationship and marriage ceremony verge on the very creepy instead of funny.

Brightman commands the stage, breaking the fourth wall to engage the audience. But while we already know the character is repulsive and self-serving, the character’s humor is often just offensive, rather than clever.

That is the core issue with the musical. With so much talent invested in this production, the possible broad appeal for all ages, and wry script from the film, one wonders why writers Scott Brown and Anthony King would choose to reinvent the wheel. They mostly go for cheap laughs with often gratuitous, crude bathroom humor and sex jokes.

References to other musicals were fun but it seemed a bridge too far with Beetlejuice’s final exit line to the Netherworld. The roasted puppet pig, with all of its parts coming to life during the infamous dinner scene (Harry Belafonte’s “The Banana Boat Song” taking center stage), was a crass and unnecessary distraction. Only briefly was the audience treated to the wonderfully weird Tim Burton characters from the Netherworld waiting room scene as well as the giant sandworm. Thought marvelously performed, why the boy band?

Any poignancy in the show that speaks to grief and the relationships between parents and children seems awkward, rushed, and utilized to wrap up everything nicely in a bow. The musical doesn’t seem to know what direction to follow. Perhaps it’s time to go back to the source before it hits Broadway.