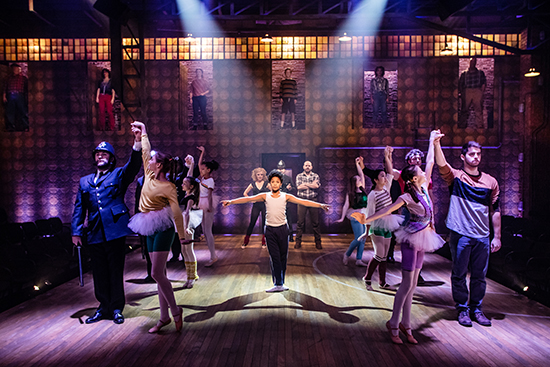 On a cold, wet night in Arlington, Virginia, I had the pleasure of seeing a singularly heart-warming show, “Billy Elliot the Musical,” at Signature Theatre. This production felt like the ultimate theatre experience; an extravaganza of song and dance that will not fail to please.

Based on the 2000 movie of the same name, the musical follows relatively the same story, set during 1984 England. The top of the show sees orange-jump suited coal miners plying their trade, which is immediately disrupted when a strike is declared. The miners exchange their helmets for protest signs reading “Coal Not Dole.” Margaret Thatcher, the prime minister who closed coal mines and opposed the power of the miner’s union, is heard on the radio calling the striking workers “the enemies of democracy.”

It’s in this set of hard circumstances, and hardened men, the 11-year old Billy Elliot (Owen Tabaka) finds himself. Both his father (Chris Genebach) and brother, Tony (Sean Watkinson), are striking miners, his mother (Crystal Mosser) having died before the show opens. In this mostly male enclave, Billy is encouraged to pursue the traditionally masculine exercise of boxing at the local community center. A reluctant boxer, he has a chance encounter with the ballet class that shares the space, taught by the brassy ballet teacher Mrs. Wilkinson (Nancy Anderson). A romance with dance begins, one that he pursues without telling his family.

…the ultimate theatre experience; an extravaganza of song and dance that will not fail to please.

Book and lyrics are by Lee Hall, the screenwriter of the original film, with music by none other than Elton John. The collaboration leads to some very catchy pieces with a big band sound, nicely roughened by electric guitar. Rather than being show-stopping, the ensemble singing pushes the action exuberantly forward, as in “Solidarity,” a vibrant, surrealist ensemble piece that sees police and strikers clashing amidst the children’s ongoing ballet rehearsal.

Owen Tabaka shines as Billy (in a role shared with Liam Redford); unaffected, with a comfortable stage presence, Tabaka’s authenticity helps the more dramatic notes of the show land easily, especially his touching scenes with the apparition of his mother.

Nancy Anderson is divine as Mrs. Wilkinson, the straight-shooting ballet mistress reminiscent of Bernadette Peters. With a sarcastic edge and a soft heart, her interplay with Billy is one of the highlights of the show. “Dancing is as much about discovering things about yourself as it is about the dancing,” she explains to Billy when they start private lessons to help him prepare for an audition.

Speaking of dancing, there is quite a lot of it, and all quite good. It’s not all ballet; “Expressing Yourself,” a fun, self-affirming ballad that Billy dances with his friend Michael (Jacob Thomas Anderson), features an excellent tap number, complete with kick-line and razzle-dazzle costumes courtesy of Kathleen Geldard. The height of the show is certainly the “dream ballet” which sees Billy dance alongside an adult version of himself (Grant Richards). Director Matthew Gardiner’s choreography invokes breathtaking flights of fancy that feature actual flying.

Performed on a thrust stage, the singing and dancing feels even more immediate. Jason Sherwood’s set design could be described as ‘charmingly industrial,’ a metallic wall with a crafted quality that saves it from being sterile. The picture windows that open in the façade lend a whimsical, almost storybook, feeling to the stage action.

The second half starts on a somber note, during a festive Christmas party that nonetheless reveals the miners’ strain during the continued strike. Chris Genebach is wonderful as Billy’s father, a conflicted, gruff man who nevertheless loves his children. His rendition of “Deep into the Ground,” a solo performance about personal and professional loss, is deeply poignant. Genebach portrays the character’s emotional depth in a way that encourages the audience to invest in his journey towards embracing his son’s talent.

The finale of the show is both hopeful and bittersweet, as Billy starts on a new adventure. It’s a powerful end to a phenomenally performed, emotionally rich show.

Running Time: About 2 hours and 45 minutes with one 15-minute intermission.

Advisory: Billy Elliot contains profanity, some violence, theatrical haze, strobe lights and depictions of cigarette smoking (herbal). It may not be appropriate for children under 8 (parental discretion). Signature does not admit children under 6. (from Signature Theatre)