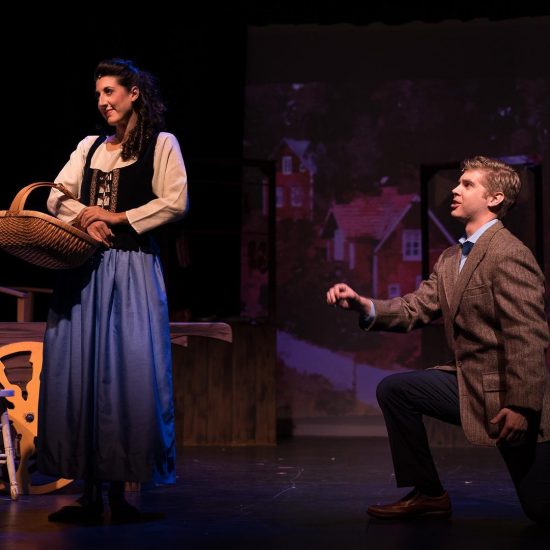 “The mist of May is in the gloamin’, and all the clouds are holdin’ still. So take my hand and let’s go roamin’ through the heather on the hill.” Rockville Musical Theatre presents the delightfully transportive and beautifully nostalgic Learner and Loewe musical “Brigadoon,” onstage now through November 11th, 2018 at the F. Scott Fitzgerald Theatre.

For audiences who are unfamiliar with the story of “Brigadoon,” let me set the scene. Two Americans, Tommy Albright (James Myers) and Jeff Douglas (Kirk Patton Jr.), are on a game hunting holiday in Scotland, when they get lost one afternoon. They stumble upon a village not on the map, which the locals say is called Brigadoon. There, they meet the kind and friendly residents, including the beautiful Fiona MacLaren (Keely Borland), with whom Tommy is instantly taken. Fiona’s friend Meg (Amanda Jones) is also very interested in Jeff, though that attraction is a bit less reciprocated. Fiona asks Tommy to accompany her to her younger sister Jean’s (Erica Aquilina)’s wedding to local boy Charlie Dalrymple (Noah Calderon). There, Tommy is introduced to Fiona’s father Andrew (Peter Wolff) and enjoys the lively festivities with the people of the village. However, things take a dramatic turn when Harry Beaton (Ari Halvorsen) strikes out angrily, frustrated that Jean, the woman he loves, has chosen someone else. He threatens to leave Brigadoon, which seems to terrify everyone. When Tommy asks why the town fears someone leaving, Fiona takes him to the mysterious Mr. Lundie (John Barclay Burns), who explains the magical secret of Brigadoon. Tommy and Jeff join the search for Harry, and Tommy is left with an impossible choice: leave life as he knows it behind, or lose what may be the love of his life forever.

“Brigadoon” premiered on Broadway in 1947, and ran for over 500 performances. It was adapted into a successful movie in 1954, starring Gene Kelly and Cyd Charisse, and an Emmy winning television special version in 1966 starring Robert Goulet and Peter Falk. Some songs have become American standards, including “The Heather on the Hill,” “Come to Me, Bend to Me” and “It’s Almost Like Being in Love.” “Brigadoon” ended up Lerner and Loewe’s first big hit, followed of course by blockbuster musicals “Paint Your Wagon,” “My Fair Lady,” “Camelot,” and the stage adaptation of “Gigi.”

While some might say that such a fanciful and old-fashioned musical isn’t a good fit for today’s audiences, I would have to disagree. Rockville Musical Theatre’s production of “Brigadoon” was like a breath of fresh air. In an increasingly complicated world, it was lovely to escape, even just for a little while, into the idyllic world of “Brigadoon.” This production was enjoyable from start to finish. Not only did Borland and Myers have outstanding voices, but they also had the right style of voice for these parts. Borland also did very well with the difficult Scottish accent and her portrayal of this character made it understandable how Tommy could fall in love with her in just one day. A highlight was her charming rendition of “Waiting for My Dearie,” which gave the audience a sweet and romantic introduction to the show’s heroine. Myers was similarly talented in the male lead. While he didn’t have to use the Scottish accent, he actually utilized a different accent. Myers successfully spoke like people from the U.S. in the 1940’s, which helped to situate the play’s setting. He excelled at “There But for You Go I,” and Borland and Myers combined together for a sublime performance of perhaps the most famous song from the show, “It’s Almost Like Being in Love.”

Patton Jr. was also successful as the resident cut-up of the piece. He shot off the one-liners of his character’s with skillful comic timing. He was also able to show some seriousness as well, and the help that he lent his friend in his hour of need was poignant. Jones was also charming a the saucy Meg, turning in engaging performances of both “The Love of My Life,” and ” “My Mother’s Wedding Day.” Barclay Burns came by his Scottish accent honestly; he is actually an expat! He also did a fantastic job in an important role within the show and explained how the magic of Brigadoon came to be. Aquilina looked like a young Natalie Wood and held herself with an inordinate amount of poise. Her ballet section was lyrically beautiful and she brought a lovely energy to the role of Jean. Equally lovely was her beau, Calderon, whose reedy tenor soared in the romantic classic “Come to Me, Bend to Me.” Young Halvorsen also did well as the hot-headed Harry, and the entire cast was sublime. One of the most fun things about shows like this is the huge full-cast production numbers, and this one did not disappoint.

Speaking of the large cast, the stage design was perfect to accommodate them. Maggie Modig designed an effective set that had many movable pieces that allowed all of the story elements to be portrayed, but then could be opened up to allow the large cast to move about freely and dance. Hillary Glass should also be commended for excellent work costuming not only a large cast but did so in period garb of two completely time periods. The costumes were colorful, lively, and historically accurate.

The classic music was greatly enhanced by an accomplished live orchestra, led by conductor Joseph Sorge. The choreography was also excellent, combining classic musical theater dance style, more formal ballet, and even some traditional Scottish dance (Choreography by Valerie Mikles.) Finally, there was the presence of an actual Scottish bagpipe performance by Marti Dillion, that put the cherry on top of a stellar performance. Director Laura W. Andruski should be commended for developing an enchanting production that allows you to take your own journey to this magical land, if only for a little while.

Running Time: Approximately 2 and 1/2 hours with one 15 minute intermission.

Advisory: This show utilizes smoke effects and is recommended for audiences 12 and over.

“Brigadoon” is now playing through November 11, 2018. For more information on the show or tickets, click here.