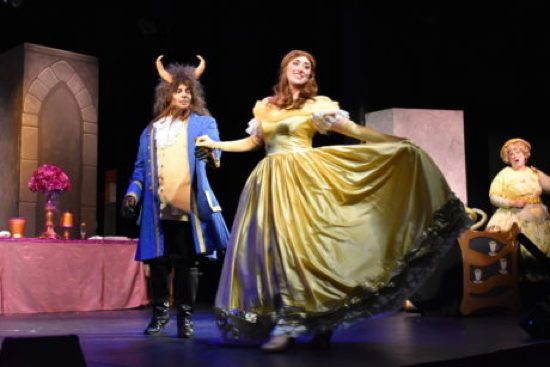 David A. Robinson (The Beast) and Bailey Wolf (Belle) in Beauty and the Beast, presented by Damascus Theatre Company. Photo by Elli Swink.

Lighthearted and fun—that would describe the Damascus Theatre Company’s production of “Beauty and the Beast.” As probably everyone knows, the story concerns Belle who is imprisoned in the Beast’s castle (he’s actually a prince being taught a very long-term lesson in humanity and humbleness by a crone), and how they grow to trust and love each other, thereby saving them both from awful fates. In his case, it would be remaining a beast forever, and his loyal servants were paying the price too as they grew into inanimate objects; in her case, it’s from a loveless marriage to a man who sees women (and most of creation) as trophies and satellites around his sun.

Many of the voices in this production are lovely. Bailey Wolf as Belle has a lovely soprano and sings Belle’s songs with verve and feeling. Her feelings of frustration and longing come through especially in her reprise of “Belle,” which the village had sung earlier to demonstrate just how wrong of a girl she is. (She has the temerity to love to read and to want to explore a wider world.)

David A. Robinson (the Beast) has a rich, deep speaking voice that is almost mesmerizing. When he finally sings a duet with Belle at the end of the second act (“Transformation”), their voices blend well with his providing a rich floor for her high notes.

As Gaston, Clay Comer embodies the song “Me.” He plays Gaston with an Elvis-like hip swivel and sneer, and provides a number of laughs with his completely tone-deaf awareness of anything besides him.

The main supporting players (Zoe Alexandratos as an effervescently funny Mrs. Potts; Jason Damaso as the excitable Lumiere, Keith Tittermary as the lugubrious Cogsworth, and Jennifer Georgia as the hysterically over-the-top Wardrobe/Madame de la Grande Bouche) provide some much needed human touches in this show. While the Beast and Belle do have something to lose, so do his retainers, and nobody ever asked them if they wanted to be part of his lesson. The fact that they can still care about him speaks to a generousness that should have won them their freedom long ago.

There needs to be a shoutout to the costume designer (and co-producer) Carol Boyle. The costumes were simply enchanting and beautifully detailed, particularly the ones for the teapot, clock, lamp, etc. Even the wolves’ costumes were imaginative and suitably furry. “Beauty and the Beast” was straightforwardly and briskly directed by Lee Michele Rosenthal.

There was one major issue at the matinee when I saw the show—the actor’s microphones were cutting out, and once they did the voices simply couldn’t compete with the music. I was sitting just a few rows from the stage, and when the mikes cut out, could not hear the actors. It did not, however, seem to dampen the audience’s enthusiasm.

The show was almost completely sold out, and the kids in the audience were well-behaved. While the decibel level was in-your-face loud pre-show in the auditorium, once the show started, the kids were enthralled. Sadly, among the parents, there was a lot of ignoring the “no pictures or recording” rule and a fair amount of surreptitious recording, and more brazen photo snapping. There were lots of oohs when Belle appeared in a ball gown and excited clapping and cheering at the end. Moving through the audience after the show one of the most common refrains I heard was “My favorite part was….” This was definitely an engaged audience.

This is a grand show to take younger children to; it’s colorful, moves briskly enough you don’t realize how long each act is and is an easy and reassuringly familiar storyline to follow.

Running Time: Approximately two and a half hours with one 15 minute intermission.