Theatre Review: ‘In This Hope: A Pericles Project’ at The Welders: A Playwrights’ Collective 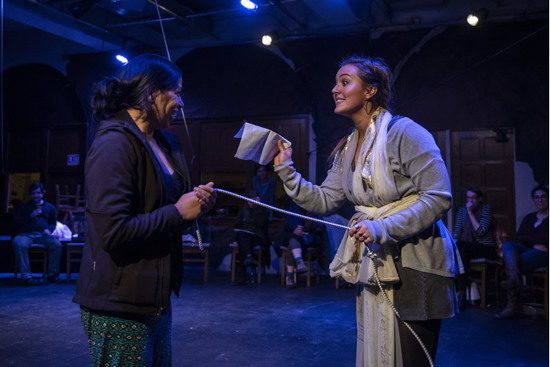 Marina (Lida Maria Benson) bargains for her life with an audience volunteer in In This Hope: A Pericles Project from The Welders (Photo: Teresa Castracane) Photography.

A gong against a brass bowl introduces the acts. Ancient place names that resonate in the bones surround us. We enter a circle and sit almost adrift. For ‘In This Hope: A Pericles Project,’ The Welders created an experience that was warm, magical, intimate without being intrusive, and almost suspended in time. Tying in Shakespeare’s Pericles with modern musings on memories and the stories we tell ourselves and each other, and how they change, we drifted in and out of time seemingly.

. . . an experience that was warm, magical, intimate without being intrusive, and almost suspended in time.

But it was a safe drift. It was like having half-remembered pieces of tales coming to the fore again and being linked to a long, long-ago story set in the ancient world centered around the Mediterranean. In a sense, the set-up of Spooky Action Theatre Company’s space, which is being used by The Welders, reinforces the notion of immersion in memory. The seating is a circle of chairs, just one row deep, and on the walls surrounding the circle are the place names of the various kingdoms in Pericles—Tyre, Pentopolis, Antioch, Sparta, and others. The experience started with the audience retrieving a map of the world and a pen from beneath the seats and filling in, if one chose, places in the world sacred to us. And circles are sacred places. This is a play of connections and the sacred places in our memories as immortalized by our stories. This is something Shakespeare understood very well, and Pericles, as overwrought as it is, resonates—it is a tale of fleeing a homeland, journeying, love, loss, remembering.

Pericles is the underlying structure of the work by Hannah Hessel Ratner; briefly, Pericles, in Shakespeare’s world, is the prince of Tyre, visiting Antioch. He flees Antioch back to Tyre because he knows that Antiochus, the King of Antioch, is having an incestuous affair with his daughter. Antiochus wants him dead. Pericles decides to leave his city, is shipwrecked, survives. He washes up in Pentopolis where he wins a tournament for the hand of Thaisa, the beautiful daughter of the local queen. They fall in love and Pericles marries her. Soon after news arrives that Antiochus is dead and the people of Tyre want their prince back. Thaisa is pregnant and the family starts to return to Tyre. She gives birth in a storm at sea and dies. Grieving, Pericles gives the child, Marina, to Dionyza, wife of the governor of Tarsus, to raise and he says he will return. Years pass and Marina, a beauty like her mother (who was a skilled poet; Pericles won her over by respecting her intellect) is seen as an impediment to Dionyza’s daughter’s marriage prospects. She instructs a servant to take Marina out in a ship and murder her but she is captured by pirates, sold to a brothel in Mitylene, and then bargains her way out of that fate. Eventually, Pericles finds his way to Mitylene, where father and daughter meet, in time for her wedding to the governor of Mitylene. Happiness ensues.

At various points in the story, the audience is invited to participate; for example, an audience member volunteered a story about an object they were wearing and Thaisa dashed off a poem, or when an audience member agreed to play the murderous servant; but then he asks, “Do I have to kill her,” and chooses not to, in spite of the majority of the audience chanting “murder” at him. We are guests at a banquet in Pentopolis, where we are offered tangelos to eat, and during intermission, are invited into the kitchen to be served warm cider or mulled wine. Right before the end of Act 1, there is a dance party at the same banquet, and we, as lords and princes visiting Pentopolis are invited to dance, and the majority of the audience does, with gusto.

There are other moments as well, such as when we, if we choose, tell a memory to the person in the next seat and receive a story in return. Or when one of the cast sinks gracefully to the floor in front of us and asks, “May I tell you a story?” We are gifted with these stories now. We may never see each other again, but we have a snippet of someone else’s story; they are forever human to us.

The stars of this show are the all-woman, multi-cultural cast; four women play all the roles. Lida Benson, Lori Pitts, Raghad Makhlouf and Rocelyn Frisco gift us with some serious stage skills. Aided by costume designer Pei Lee’s deceptively-simply long white infinity scarves painted with gold and/or silver symbols/runes, they effortless slide from one character to another.

This is not a show that everyone will be comfortable with. And that’s a shame because this show creates for a little while, a community, united in stories and experience, and each will be unique to each audience. It’s been two days now and I still have a little bit of a warm glow from what turned out to be a lovely, giving and unexpected experience.