Theatre Review: ‘King of the Yees’ at Baltimore Center Stage 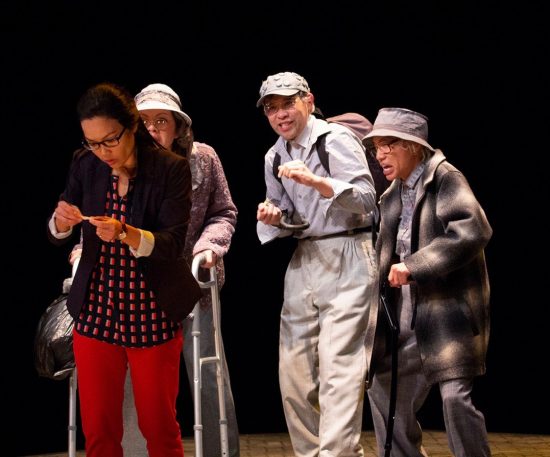 The seemingly random but hilarious zig zag story in the “King of the Yees,” directed by Desdemona Chiang at Baltimore Center Stage, ascends from reflections of playwright Lauren Yee that beautifully offers a window into her family, her Chinese-American roots in San Francisco’s Chinatown, and seldom realized aspects of American history. It is an unconventional play that attempts to piece together a rather unfocused narrative centered around her father and the “Yee Fung Toy Family Association,” but this only serves as a story within a story and coils around ultimately to the playwright herself finding her own resolve and identity.

This is a fun, entertaining play with a wonderful stage, backdrop, and some truly talented actors.

In the story and in real life, Lauren Yee (played by Khanh Doan) works with actors to portray her father, Larry Yee (played by Stan Egi), to put the story “King of the Yees” together starting with Larry’s devotion to a local politician, a Chinese American candidate named “Leland Yee” –of no relation. Lauren views her father’s community dealing as socially outdated, but Larry makes some great points as to the notion of tradition and the importance of never losing one’s cultural identity and history. Lauren, who is painfully clueless about Chinese culture, seems rather content with her abandonment of it all, especially Chinatown. She desperately wants her father to be content with her decision to marry a non-Asian and her eventual move to Germany. However, she eventually learns why her father (like those before him) need to keep their traditions alive.

What struck me the most about this play were the actors’ ability to make the audience feel like they were a part of the conversation happening on stage. They interact with the audience with subtleties and perfectly staged hiccups, it’s really remarkable how at-ease I felt throughout this performance. Although the stage remained largely unchanged throughout the show, there were many scene changes, and these transitions were fairly seamless in spite of only having five actors in the ensemble. All five are incredible actors, most playing multiple roles and changing costumes quickly without any hitches. Joe Ngo plays Larry Yee, as the actor, “Shrimp Boy” and others and was as cool as he was dramatic. Celeste Den also played multiple roles ranging from the Lion dancer to the liquor store lady, and she had some pretty comical moments throughout the play. Tony Aidan Vo started out as an apparent member of the audience, but he turned out to be in the play. His portrayal of Yee Fung Toy himself was incredibly flamboyant and hysterical.

This play is loaded with humor and parodies. It was refreshing to just laugh without the political correctness police wagging their finger at every little joke. This is a fun, entertaining play with a wonderful stage, backdrop, and some truly talented actors. Much credit goes to director Desdemona Chiang and choreographer Annie Yee for packing this much fun into two hours. The FBI Shrimp Boy shootout scene was brilliant. Costume designer Christine Tschirgi deserves a lot of praise for some superb getups, especially the snazzy Shrimp Boy, face changer and Yee Fung Toy costumes.

I will say in spite of the quirky and humorous nature of this play, it does have some serious undertones. I found the characters very likable and genuine. Perhaps this is because some of the subject matter is relative, being they are all Asian actors, and the theme of the play centers around culture and the many assumptions people make about Asians. There are also heartfelt moments, and as the story spins around, eventually it ends up in a sentimental moment between a father and his daughter. It was a very sweet touch indeed.