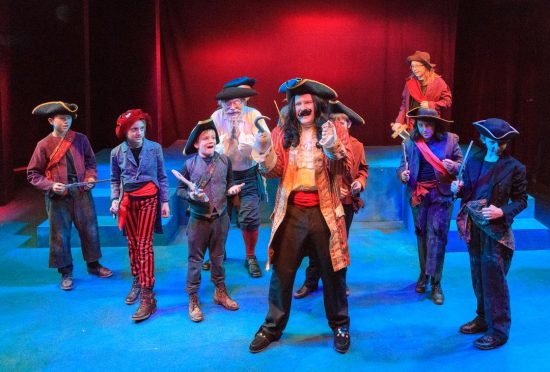 Mixing in parts of remembrances past, timely themes, nascent hopes of magic and kitschy lighting, this amalgam of elements are put together in the Creative Cauldron in Falls Church to have a jolly good go in “Peter Pan and Wendy.” More young performer’s theatre than children’s theatre, it combines young actors in a broad age range along with adult stalwarts to present a feel-good evening.

Of course, the story of “Peter Pan,” that ageless little tyke who doesn’t want to grow up, has been ingrained in our collective consciousness and told in many ways since J.M. Barrie’s 1904 play and the 1911 novel Peter and Wendy. The adventures of all of these misplaced children was musicalized for Broadway in 1954, with Mary Martin leading the way. Since then, a series of revivals has kept the show relevant and profitable to producers, with each generation  (Sandy Duncan, Cathy Rigby).

Then there is the film treatment. Parents will doubtless remember Disney’s 1953 animated version and Tinker Bell is still one of the top three merchandise figures at the theme parks. Indeed, the most successful adaptations of Peter Pan (movies or otherwise) found the heart of the story, that bittersweet theme that all children must eventually grow up.

This adaptation, created by Cauldroneer contributors Laura Connors Hill and Ellen Selby, who also co-directed, has condensed the larger original work while letting the spirit of the boy who never grew up emerge. It is certainly not as far-reaching, but a fine first start for these emerging performers.

One ambitious design choice is to engage the bedroom scenes at the Darling house with cloth icon dolls, soft in nature and on long guiding sticks, presumably to better represent the children deciding to take flight. It was quite a challenge for the young performers, and though it slowed down the character development, the added detail was impressive.

… a fine first start for these emerging performers.

Many nice elements are found in the retelling of the Peter Pan story. Lighting is craftily used in the black box theatre, with the young dancers spinning with colored rings creating an eerie effect.

Enthusiastic performances make it work throughout. Will Stevenson plays Mr. Darling as well as the evil Captain Hook with overblown panache, as he should. With stage icon E. Augustus Knapp providing support as Hook’s henchman Smee, the young performers were treated to a great chance to share the stage with a top talent, someone who is always spot on in timing and delivery.

Peter is played by the young ‘veteran’ performer Gabriela Simmons Robles, who has quite a list of credits onstage already. Her chipper Pan was nicely balanced and she moved well onstage, especially in leading the cast in the crowd-pleasing “Keep the Beat.”

Wendy Darling is played by Aashna Kapur, another young Cauldron performer of the last few years who acquitted herself well. The groups of performers between the Indians, Pirates, and Lost Boys, all reacted to the different moments in the crowd scenes in an engaged fashion.

Peter and the Darling kids decide to ‘take off to the second star to the right’, we hope we can see other shows that sweep us away at Creative Cauldron.