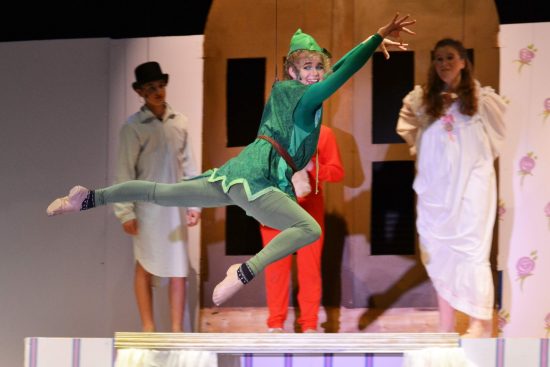 Hope Gilbert flies across the stage as Peter Pan. Photo courtesy of the Children’s Theatre of Annapolis.

For decades, the beloved story of Peter Pan has offered audiences a magical place to travel with pirates, fairies, Indians, flying and lost boys. This fall, the Children’s Theatre of Annapolis doesn’t disappoint in offering its audiences a truly enchanting show full of colorful characters, charming songs, and creative choreography, taking audiences of all ages directly to Neverland.

As the show opens in the nursery of the Darling family, we are introduced to Mrs. Darling, played with a surprising maturity by 16-year-old Peyten Blake. Her matronly care of her stage children and sophisticated vocals silenced the younger audience members and had them transported into the show’s story almost immediately.

…such a family-friendly show filled with suspense and excitement, and, yes, a little bit of fairy dust, bringing everyone back to their childhood if just for an afternoon.

Peter Pan, traditionally played by a female lead, was ably portrayed by Hope Gilbert, who made an energetic and dramatic entrance, flying her way into the hearts of the audience. Her hand walking and other physical maneuvers, along with channeling the boisterous voice of a young boy, were only outshone by her vocals, capturing the thrill of eternal youth.

Once the Darling children “flew” off to Neverland, the audience was introduced to the bungling, unruly gang of Captain Hook’s pirates. The scenes with Michael Stafford as the dastardly Cook and his sidekick Smee, played by the always hilarious Dave Martinek, were a comedic delight, and “Cook’s Tango” had the audience chuckling from beginning to end.

The imaginative and clever choreography of the show was especially showcased in both the Indian Dance and the Lost Boys’ signature song “I Won’t Grow Up.” The ensemble was a talented group of young people whose rapport and sense of excitement was obvious in every scene.

Bringing some organization and motherly love to her brothers and Lost Boys throughout the show was Annabelle Cotton as Wendy Darling, a seasoned actor at the young age of 17. Her solo and then a trio with Gilbert and Blake (Peter and Mrs. Darling) showcased her vocal talent with the tender and gentle number “Distant Melody.”

Despite a lengthy first act, the younger audience members were quiet and enthralled throughout the entire production, clapping and waving their “magical wands” frantically when encouraged by Peter to “believe” in fairies and magic to save Tinkerbell.

Dave Merrill, who served as Director, Music Director, and even Associate Choreographer, should be commended for his efforts in producing such a family-friendly show filled with suspense and excitement, and, yes, a little bit of fairy dust, bringing everyone back to their childhood if just for an afternoon.