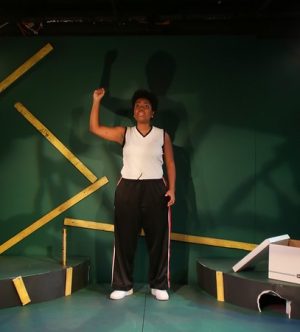 “Running on Glass” by Cynthia Cooper and directed by Deborah Randall opened at Venus Theatre in Laurel, Maryland on Thursday, November 15, 2018.  This play takes a turn from some of the very esoteric productions Venus is best known for presenting.  As usual the play uses its launch pad in women’s issues.  The theatre has done shows about actual women in the past, but this piece is about those famous in sports over the last century.  Included are some names with which you may be familiar even if you don’t follow sports, Althea Gibson, the first black to break the color barrier in tennis (man or woman), Babe Didrikson, one of the greatest all-around athletes of her time, and Gertrude Ederle, the first woman to swim the English Channel.  If you follow sports, you might know about Wilma Rudolph, a childhood heroine of mine, who overcame polio to win an Olympic gold medal.  New to myself were the names Gretel Bergmann, a Jewish-German athlete used by the Nazis for propaganda purposes and Mamie ‘Peanut’ Johnson who pitched in the all-male Negro League after the Major Leagues were integrated.

The story opens with Ellie (Deborah Randall) and Anna (Christine “Tina” Canady) discussing Anna’s attempt to turn an empty store at a mall that is almost defunct into a small Women’s Sports Museum.  Ellie is dubious and is thinking small scale while Anna wants to honor women going back to the early 20th Century.

In Anna’s presentation of her dreams to Ellie the two assume the personages of the six great athletes mentioned above.  Each pick a moment or two in the sports star’s lifetime that was pivotal in their athletic careers.  Each flashback is preceded by a slide show of the actual sports heroine and music from that time.  This was a perfect way to deal with the transitions for the actresses.

…a grand slam for fans and athletes of all ages.

Both Randall and Canady do a studied performance in each role they play.  Randall not only changes her accents from the brash New Yorker, Ederle, to the spirited Texan, Didrikson to the angry and frightened German-Jewish high jumper being manipulated by the Third Reich but changes her body language to convey the sport in which each athlete excels.  Randall’s section on Bergmann was especially moving as the proven world class high jumper finds out she is no longer able to compete in the sport she loves so well.  Bergmann explains how hard it is to be an athlete who can no longer be an athlete, and why, even though being an athlete is the most important thing in her life, she can no longer participate if it means having to give up her principles.  We can see that in sports today.  We still have athletes who are not allowed to play when they stay true to their beliefs.

Canady helps us go into the minds of Gibson, Rudolph and Johnson.  Canady recreates Gibson’s  accent from the tough girl from Harlem determined to play tennis long before Serena or Venus Williams even saw a tennis court.  She allows us to see how Gibson turns anger at being booed at Wimbledon to strength the following year.  Gibson did this before even Arthur Ashe became one of the first African-Americans to win a championship in tennis.  As Rudolph, Canady shows us how the runner overcame polio as a child to become the first black woman to medal in an Olympics.  Again, the spirit of the athlete shines out to the audience, particularly in the scene where Rudolph demonstrates how to run sprints.  When she evolves into Johnson, the very confident pitcher who could not break the color barrier in women’s professional baseball but was able to break the gender barrier in the Negro League of men’s professional baseball, Canady transports us effortlessly into the mid-20th Century.  Johnson, as we find out, not only played in the League, but was an outstanding pitcher at the height of 5’3”.

Randall’s conception of the play keeps the intimacy strong between the characters and the audience.  You feel like they are truly opening their hearts to you.  I really appreciated the thought that went into the slide show on the back wall.  It helped underline the essence of each woman and the ending montage with projections of many modern athletes, like the Williams sisters, Michele Wie and Florence Joyner among many others, put prospective on the plight of their predecessors.  The set and lighting design are by Amy Belschner Rhodes.  The set, though minimalist, gives us the feel of a run-down mall. The lighting helped with the mood for each monologue, yet, helped us feel we were watching a much larger stage.