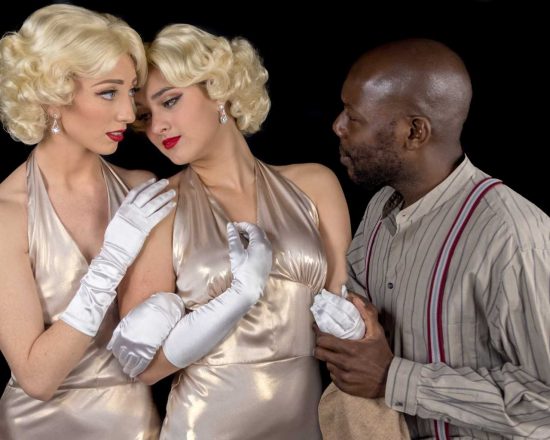 Come See the Freaks!  A typical carney huckster works the crowd during the opening number of Dundalk Community Theatre’s outstanding take on “Side Show,” the musical with a book and lyrics by Bill Russell and music by Henry Krieger (additional book material by Bill Condon.)  Why should we do that, though?  What on earth possesses folks to go see people whose unfortunately unusual physical characteristics are presumably reason to put them on display? With nary a thought to the actual person inside the curious outer shell, we ooh and ahh and cringe and laugh, then return to our ‘normal’ lives.  Thank goodness these shameful practices have for the most part been discontinued (Kardashians aside).  But in the wake of that bygone era, we have a lovely little musical called “Sideshow.”

These are performances that audiences will talk about for a while.

Here is the tale of the real-life Hilton sisters, conjoined twins who enjoyed a level of fame in the 30s by displaying themselves, first in carnivals, then in vaudeville and movies. One of the sisters is desperate for recognition and fame, the other for love and acceptance. Their behind the scenes story is one filled with abuse, deception, deceit, loves lost and found and lost again, all set against a backdrop of the depression. It’s a shame they were born too early for reality TV or YouTube.  Might’ve helped both get what they really wanted.

Robert Opel has crafted a dark and totally engaging view into the lives of Daisy and Violet Hilton (no relation to Paris, but there are some similarities), denizens of the seamy world of this carnival sideshow. Opel keeps the action moving and allows the actors to shine through the occasionally hokey script. This director has assembled a cracker-jack team of talented pros both on stage and behind the scenes.  With a truly impressive set by Marc W. Smith, the action unfolds in front of a rather elaborate scaffolding that is capped with a small stage hung with white sheer curtains that perfectly frame the two stars.  Marc is responsible for the appropriate lighting and sound design as well.  Deanna Brill’s costumes are exceptionally well done and dress the various carnival acts, supporting players and the double costumes of the conjoined twins in period perfection.

Vincent Musgrave’s choreography is always well planned to highlight the strengths of the players and never more so than in this piece with its challenging rhythms. And musical director Rebecca Rosselo leads the band with the sure touch she also brought to the terrifically sung ensemble and solo numbers.

The supporting cast does a fine job interpreting the various personalities circling around Daisy and Violet.  All are outstanding, though there is a certain one-note quality to each of them that doesn’t allow for much artistic growth for the characters.  Jose Teneza plays various roles with the same bright smile and kinetic energy he brings to every stage I’ve seen him on, which is a very good thing indeed. J. Lynn Tallman is a severe and scary Auntie. Dorian Smith is a lithe and appealing Houdini and cute as a puppy as the Dog Boy.

Peter N. Crews is smarmy and effective as Sir, the weaselly conniving con man who runs roughshod over the twins and opens the show with an excellent rendition of Come Look At the Freaks. Daisy and Violet are rescued by Josh Schoff as Buddy Foster and Ryan Wagner as Terry Connor.  Schoff and Foster are both strong actors with fine voices who hit all the right notes in their characterizations.  Foster singing Private Conversations and Schoff singing and dancing One Plus One Equals Three are both highlights.

Troy Haines-Hooper is terrific as Jake, the quietly supportive roustabout who takes very good care of the twins. His You Should Be Loved and The Devil You Know are both showstoppers.  He is quietly commanding and eschews the histrionics and scene-chewing too often seen on local stages.

Ana Lane and Lindsey Litka are both vocal powerhouses with belts that can make all the hair on the back of your neck stand up. Their softer, more plaintive notes can tug your heart and bring a tear to your eye.  Litka is worldly and full of brass.  Lane is hopeful and innocent (appropriately – she’s still in her teens – which is incredible given the depth of her performance.) Their second act curtain song, I Will Never Leave You is particularly poignant and is as impressive as it is moving.

“Side Show” is not one of my favorite scores – the music is clunky and the lyrics are a little trite.  But the performances on the stage at Dundalk Community Theatre are good enough to overcome the shortcomings in the script and score.  And frequently, they’re good enough to not just overcome but soar above.  These are performances that audiences will talk about for a while. So hurry! Hurry!  Hurry!  Step Right Up and See the Freaks!  And better yet, see what makes them just like the rest of us.