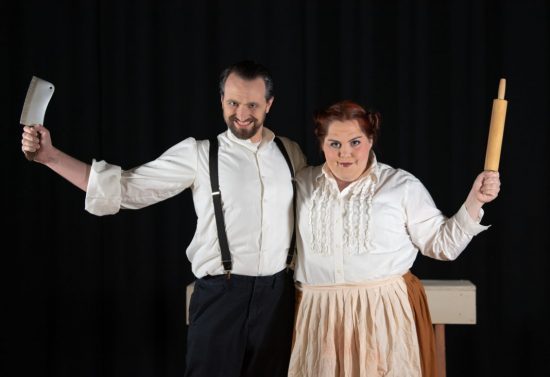 As you enter the theatre in Sterling, Virginia, you will be greeted by bloody knives and organ music. At center stage is a pair of dark furnace doors. The chilly space is tinged with blue light from the production crew, and if the hairs on the back of your arms stand up, consider it preparation for the show. Directed by Megan Stockman and produced by Shanna Christian, “Sweeney Todd” is sure to give you chills.

Sterling Playmakers’ rendition of ‘Sweeney Todd’ is impressive and could easily be mistaken for a professional production.

Originally set in 18th century London, “Sweeney Todd: The Demon Barber of Fleet Street” may seem a far cry from other Sondheim musicals like “West Side Story” and “Into the Woods.” This dark, murderous musical features Sweeney (Dave Joria), a wrongly accused barber returned to London to find his family after 15 years in Botany Bay. When local baker, Mrs. Lovett (Elizabeth Drake) recounts the tragedies that befell his family, Sweeney swears to avenge his wife and find his daughter Johanna (Roan McLean). As Sweeney’s thirst for revenge consumes him, he slips further into madness. He will stop at nothing to quell his bloodlust, and if he can improve Mrs. Lovett’s pie business along the way? So be it.

The Sterling Playmakers’ cast carried the musical. From the first number “The Ballad of Sweeney Todd,” the actors kept their notes crisp and audible––often a difficult feat with Sondheim music. Elizabeth Drake’s vibrato, Sara Watson’s (the Beggar Woman) belts, and Jim Collinson’s (The Beadle) truly incredible range were some of the standouts. With each song, I doubted whether the actors would be able to hit whatever odd note Sondheim had thought to add next, but every time they hit the tricky notes with well-practiced precision. The only musical shortcoming occurred when some actors forced British or Cockney accents into their singing in a way that detracted from the otherwise clean notes. The cast also complemented its musical talents with excellent physicality and comedic timing. Joria’s manic eyes, Watson’s well-timed hobble, and Holly Tupper’s (Tobias Ragg) boyish energy all carried the story beyond the songs.

In addition to boasting a talented cast, “Sweeney Todd” is such a successful production thanks to its creative crew. Although everything from the sound (Eric Fisher) to the stage violence choreography (Steve Schrader) was integral to the show, the costuming, props, and lighting added extra whimsy. Costume Director Kati Andresen, Make-Up and Hair Director Alia Robinson, and their respective staffs stayed true to a period look and grounded the musical in Victorian England. The Properties Director Rachael Wilks drew the audience in with realistic props including pie dough and shaving cream bowls. Finally, the inventive lighting designed by Chris Gray added dimension to a mostly static set. A particularly interesting use of lighting was when spotlights flashed between two concurrent scenes. Although this technique left some lag time between the scenes, it was an engaging and unexpected change of pace.

Sterling Playmakers’ rendition of “Sweeney Todd” is impressive and could easily be mistaken for a professional production. Their take on an emotionally fraught work with tricky music was well-worth driving a little further outside of D.C. All this is to say, you should attend the tale of the demon barber of Fleet…Street.

Running Time:  Two hours and 45 minutes, including one 15-minute intermission.

Advisory: Please note that this show contains violence and some graphic scenes and may not be suitable for children.