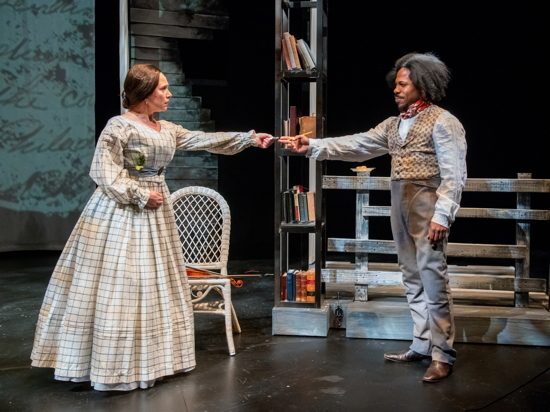 Marni Penning as Susan B. Anthony and Ro Boddie as Frederick Douglass in ‘The Agitators.’ Photo by Stan Barough.

Susan B. Anthony and Frederick Douglass. Two great Americans few people have not at least heard of. Few realize that the two were dear friends who both desperately fought for voting rights and often disagreed on how that should be achieved. “The Agitators” explores their long friendship through the many trials that they faced.

KenYatta Rogers’ directing was fluid and fierce allowing the actors to explore and delve into the world of late 19th century America.

The set designed by Jonathan Dahm Robertson, partnered with the projection design by James Morrison was truly remarkable. Mosaic performances are often open captioned, but the way that the captioning was integrated into the set was clever and artistic rather than seeming forced. The way the set pieces flowed across the stage and created different rooms and platforms was quite impressive.

KenYatta Rogers’ directing was fluid and fierce allowing the actors to explore and delve into the world of late 19th century America. With Elena Velasco as movement coordinator, this piece was strikingly staged and created powerful moments of physicality.

Amy MacDonald designed the costumes for this piece which covered several decades of the 19th century. These pieces were not only beautiful but functional and easily adjusted to show the changing times.

The sound design of this show was crucial. There was a lovely emphasis on music and practical background sounds. Designed by David Lamont Wilson, it was refined and brought so much life to the story.

Ro Bobbie played Frederick Douglass. He is a smart and vigorous actor who brought vibrant energy to the stage. Bobbie brought out the great depth and complexity that made up Douglass’ life and choices. His ability to connect with grief and joy was astounding.

Susan B. Anthony, played by Marni Penning, is ferocious and dynamic. Her ability to humanize Anthony from a young woman to an elder who not once gave up, or rarely sat down, was strong and powerful. These two actors together created theatrical magic, an electricity of passion and justice.

The ensemble also includes Adanna Paul and Josh Adams, who fill in as other characters, set the tone, and create the images to the fables that Douglass is prone to telling. Their work was powerful and added a wholeness to the production.

Agitate, agitate, agitate. That was what Douglass said. He knew that the way to make a change was little agitations within an individual’s realm of influence, then those sparks would grow and grow until change happened.

This play is extremely timely here on election week. It serves as a good reminder that most Americans had to fight for voice to be heard by the government.

“The Agitators” at Mosaic Theater Company runs at Atlas Center for the Performing Arts through Nov. 25. For tickets and more information click here.