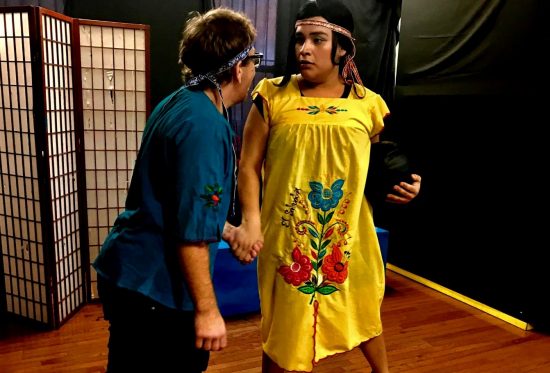 Nelwat Ishkamewe Two-Spirit Theater brings indigenous mythology to life with “The Cosmic Twins,” a play for young audiences that tells the story of how the sun and moon were created, based on the Popol Vuh or “Book of the Community,” the Maya K’iche people’s cultural and historic narrative.

…offered audiences an opportunity to honor both Native American Heritage Month and Transgender Awareness Month, gracing us all —young and old alike— with a glimpse of the riches of indigenous culture.

The twins, “proud people of the corn” are happy in each other’s company, particularly when playing ball, until one day when they are summoned to the underworld by the Death Lord, Jun-Kame (Ricky Rosé) where they must survive a series of trials.  They ultimately triumph, rising into the heavens to become the sun and the moon.

With a lively score, colorful masks (Kota Hicks and Ahanu On), and a handful of simple props, the talented cast transformed an intimate setting into a land where wild creatures roam free, the gods’ reign supreme, and in the end, good wins out over evil.

Notable performances abounded.  Ahanu On captured the character of the frightened brother, Junajpu, and Ricky Rosé excelled as the scary Jun-Kame.  Xemiyulu Manibusan Tapepechul was particularly notable for her clear and powerful singing voice.

As a transgender, Native American theater company, Nelwat Ishkamewe Two-Spirit Theater’s production of “Cosmic Twins” offered audiences an opportunity to honor both Native American Heritage Month and Transgender Awareness Month, gracing us all —young and old alike— with a glimpse of the riches of indigenous culture.