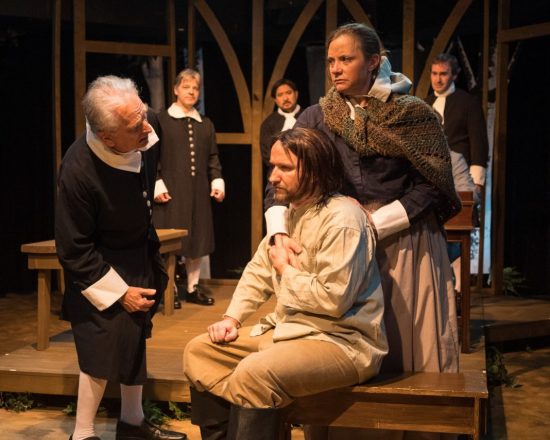 The cast of “The Crucible” at Silver Spring Stage. Photo by Harvey Levine.

It is colonial Salem, Massachusetts, in the year 1692, at the height of the witchcraft hysteria.  “If you refuse to answer this court, then by the Statute you will be condemned to have your body pressed by great weights until you shall be dead!” says the Salem Witch Trials prosecutor Hathorne to Salem farmer  Giles Corey.  “I do not believe in Witches nor in Witchcraft,” his wife Martha Corey, also accused of witchcraft, says.  When presented with “evidence” by the court that a group of girls has accused Martha, saying that “you foresaw our visit here, and blinded them,” she exclaims in outrage:  “The cunning, crafty girls!”  And “what says Goodwife Proctor?” asks Giles Corey of farmer John Proctor’s wife.  “I am not good. I am a Witch,” admits Barbados native Tituba, under duress and threats of torture.

If you have seen “The Crucible,” focusing on and set in the period of the Salem Witch Trials, you may be surprised to learn that the conversations and quotes above are not from Arthur Miller’s celebrated play at all, but from “Giles Corey of the Salem Farms,” a drama penned by the celebrated Romantic poet Henry Wadsworth Longfellow.  I have long wondered why “The Crucible” is one of the most widely known and performed pieces in the American theatre, whereas “Giles Corey of the Salem Farms” rests in obscurity, unread and unperformed.

Perhaps I found the answer in the Silver Spring Stage production of “The Crucible,” directed by Craig Allen Mummey and running through November 17.  “The Crucible,” telling of the Witch Trials episode in American history in a compelling drama with its plethora of themes,  can be interpreted from so many angles, and this solid and multifaceted presentation gives equal voice to all parts of the play in order for the viewer to explore all issues presented.

Joseph Coracle gives a spirited performance of John Proctor, defending his wife (or “Goodwife”) Elizabeth Proctor (played with sincerity by Andrea Spitz) against the ludicrous witchcraft charges.  Scenes in which Proctor confronts Abigail Williams (portrayed convincingly by Rebecca Cohen), the teenager who is in love with him, are particularly memorable.  Giles Corey is brought to life with humor and verve by Stuart Rick, and his performance provides a bit of welcome comic relief in the grim world of Puritan Salem.

Two standout performers who give us “You Are There” moments, channeling 1692 with utter verisimilitude, are Melanie A. Lawrence as Tituba and Bill Hurlbut as Deputy-Governor Danforth.  The latter, with his stern demeanor presiding over the trials, conveys his part like an echo from America’s Puritan past.  Omar LaTiri, as the awakening conscious of Reverend John Hale who begins to turn against the Witch Trials, is likewise excellent.

The acoustics are good, and the colonial-style costumes are very fine.  The sets of the woods and unfinished wooden Gothic arches suggesting church windows lend a good feel for the rural days of the Puritan Massachusetts Bay colony and fledgling American province.  These sets, as well as an open-to-all-interpretation production and very human performances by a stellar cast, allow the viewer to explore all issues involved in the play – and in fact belie program notes in the playbill which seem to force certain interpretations of the play on the viewer.

Do the economic  squabbles and petty lawsuits between Salem residents lead to the accusations of witchcraft, in quid pro quo revenge?  Are the allegations of the wailing girls, accompanied by visions, due to a desire to break free from a socially and sexually repressed society?  Can we learn from the witchcraft hysteria and apply it to contemporary events and problems?  It is the mark of a good play that each time we see it, a different theme can present itself, and the current Silver Spring Stage production of “The Crucible” is notable for its judgment-free presentation which allows the audience to consider a great variety of thought-proving interpretations.