Theatre Review: ‘Things That Are Round’ by Rep Stage at HCC 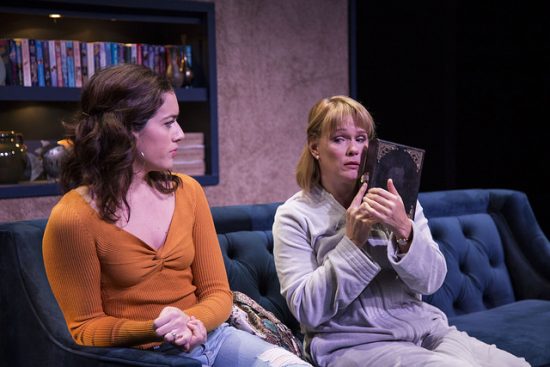 Thais Menendez and Beth Hylton in ‘Things That Are Round’ at Rep Stage. Photo by Katie Simmons-Barth.

Rep Stage’s world premiere of Callie Kimball’s “Things that are Round” is presently playing at the Studio Theatre at the Horowitz Visual and Performing Arts Center at Howard Community College.  The polished production is directed by Lola B. Pierson with sterling performances by Beth Hylton as Tetherly and Thais Menendez as Nina.

The drama itself is an offspring of theatre of the absurd.  It is no coincidence the director quotes one of the iconic absurdist playwrights, Samuel Beckett, in her notes.  Beckett was best known for “Waiting for Godot,” but many of his plays are two-person dramas where nothing really happens.  The dialogue is often unrealistic, but there is always tension and conflict. Like the characters is Beckett’s plays, the two women in this show use dialogue to parry each other in a duel of words.

If you like exciting, cutting edge theatre, this is a play you should not miss.

The plot is not as important as the words that are said, but on the surface the story starts when Tetherly, a dentist, is looking to hire a nanny for her four-year-old deaf son, Dylan.  She is interviewing Nina, who is a laid-off para-legal and aspiring opera singer.  Nina is married and has a two-year-old daughter.  She is eventually hired, and throughout the play we learn that less and less of what seems to be real is, perhaps, not reality.  Hints are thrown out throughout the performance.  Tetherly claims, for instance, that her clientele is mostly seniors, because she takes Medicare.  However, anyone on Medicare would know, Medicare does not cover basic dental care.  Nina is an opera singer but does not know the real plot to La Boehme.  Each gives up pat answers to questions that should be reality checks, for example, who is Dylan’s father.

Tetherly keeps a list for items she will need for the Apocalypse which Nina has redubbed Apocalist.  In a scene called Rondo, Nina lists items she is adding to the list, many of which are absurd, for instance, man-hole covers.  Reality actually keeps unraveling as their relationship is bonding.

Tetherly is writing a doctoral thesis in Calculus.  However, even this, seems surreal.  Tetherly talks about monads which she describes as round atom like structures that you cannot see but the do no cease to be.  This is analogous to theatre itself.  Every performance of a play is gone after the curtain closes, unlike a movie or television show.  However, it never ceases to exist.  Monads like atoms (and females) are “Things that are Round.”  Every viewing of this play, will continue to live in your mind and make you contemplate what is real in this world and what is not.

Hylton and Menendez as Tetherly and Nina are the stalwarts of the production.   Their performances carry tension as in the scene where Nina describes the birth of her daughter, and when Tetherly’s performs an impromptu cleaning of Nina’s teeth in her living room.  Both moments are filled with foreboding.  The two actresses have their characters become more in sync as the drama builds to an unpredictable conclusion.  Hylton captures Tetherly’s vulnerability, and Menendez’s portrayal of the stronger, and sometimes conniving, Nina allows us to find her untrustworthy but yet, somehow believably compassionate to her less stable companion.

Pierson’s direction and concepts are clever.  She projects the scene names on a screen on the high over the stage as well as projecting what the actors are seeing on the television.  She will briefly focus on small hints in the plot of what is to come.  It gives the audience a reason to pay close attention to the action and the dialogue as they would in a mystery play.

Daniel Ettinger’s set is simple but reflective of this absurdist drama.  A little blue chair often dominates the scenes.  The television appears to be placed in a structure that looks less like a TV stand a more like a fireplace.  The lighting design by Sarah Tundermann helps to create some of eeriness of the apartment and its inhabitants.  Heather C. Jackson is the Costume Designer, and I did appreciate that the actors were able to do fast changes even onstage.  Sarah O’Halloran, Composition and Sound Design, helps evoke some of the eeriness of the plot.

Kimball’s tale does not fall into any definite mode.  It is funny at times, it is dramatic at times, and it is mysterious at times.  The character Nina expresses it best when she tells Tetherly that she is a little weird but in a good way.  She states, “And your weird brings out my weird and then we’re no so weird anymore, you know?”  This play is a little weird and so are we all.  Therefore, when you watch the performance, it will seem we’re all not so weird anymore.  If you like exciting, cutting edge theatre, this is a play you should not miss.

“Things that are Round” plays at Rep Stage through November 18, 2018, in the Studio Theatre of the Horowitz Visual and Performing Arts Center at Howard Community College — 10901 Little Patuxent Parkway, in Columbia, MD. For tickets, call the box office at (443) 518-1500, or purchase them online.