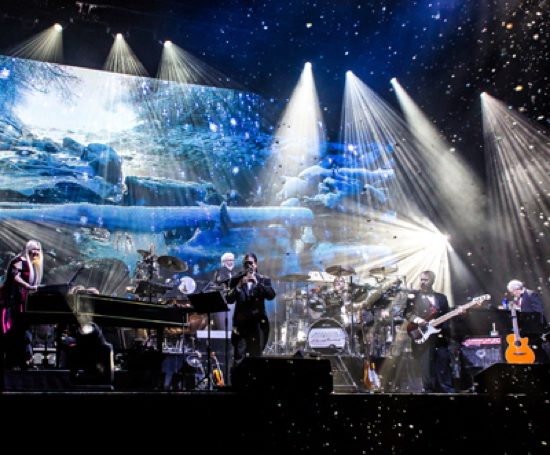 During the holiday season, there’s never a shortage of lively entertainment options. How do you choose? Well, this year, this reviewer got the opportunity to see a performance that she has wanted to see live ever since she was a little girl- Mannheim Steamroller. This unique and dynamic group has been putting their spin on Christmas classics for over 30 years, and have produced some of the most recognizable versions of certain carols in popular culture.

Mannheim Steamroller is the brainchild of musician Chip Davis, who named the group after a German musical technique. He formed his own music label, American Gramaphone, in 1975 to release Mannheim Steamroller’s first album, “Fresh Aire.” While the “Fresh Aire” series did well, they found their greatest success with their Christmas adaptations. Their first Christmas album, ” Mannheim Steamroller Christmas,” was released in 1984, and was quickly followed by several more Christmas themed albums. Their first Christmas album has been certified Platinum 6 times over, and 7 of their other Christmas albums have gone Platinum as well, selling millions of albums all over the world. They have appeared on the Today Show, Late Night with Jay Leno, two Macy’s Thanksgiving Day Parades, and in countless renown music venues in cities around the globe. Their unique blend of synth and classical allows them to stand out within the instrumental musical genre.

…the performance was incredibly enjoyable and was the perfect kick-off to a joyful holiday season.

Due to the immense popularity of the Mannheim Steamroller Christmas oeuvre, they send two tours out simultaneously, to allow as many people to enjoy these iconic tunes as possible. At Strathmore Music Center, we had the Green Tour Cast. The show got underway with a non-Christmas kickoff, “Escape from the Atmosphere” from the album “Music of the Spheres.” It was accompanied by a video of space travel and exploration, and the wonder that goes along with it. After it, the man himself, Chip Davis, came on the screen to welcome the audience. That led into one of their most well-known Christmas favorites, a rocking rendition of “Deck the Halls.” The video that played with it showcased the career and success of Mannheim Steamroller over the past more than 30 years. The rest of the first act flew by while sharing favorites like “The Little Drummer Boy, ” “Away in a Manger,” and “Angels We Have Heard on High.” The Mannheim Steamroller group played their instruments expertly, but you could also tell they were having a great deal of fun and were enjoying the performance almost as much as the audience.

After a brief intermission, they jumped right back in with a rocking version of “Joy to the World.” They also performed an updated version of the Elizabethan song, “Greensleeves,” featuring vocals by Chip Davis’ very own daughter Elyse (via video). Davis’s voice was jazzy; reminiscent of the singer Elle King. The video that accompanied the song followed the recording of this song, and then featured the song being performed live by Elise Davis and Mannheim Steamroller at venues around the world. In addition to several other Christmas hits, they also played a few of their non-Christmas songs as well, all from the Fresh Aire series. This reviewer’s favorite of these was “Toccata,” which had a lightning fast synth line reminiscent of ELO. It also had a bit of an Irish air to it. Another favorite of this reviewer was their fast-paced modern version of “the Waltz of the Sugar Plum Fairy,” called “Faries from ‘The Nutcracker'” by Manheim Steamroller. This version was awesomely funky, with the delicate bell sounds of the original paired with rollicking drums and electric bass. For extra effect, the drummer even had light-up drumsticks!

The evening wrapped up with perhaps the best known and loved song in Mannheim Steamroller’s repertoire: “Carol of the Bells.” It is a song that is almost omnipresent during the holiday season, from the radio to being used in TV ads and so forth. It was definitely a song that many in the audience had come to hear, and they weren’t disappointed. It sounded even more dynamic in person, and it was apparent that the performers onstage felt honored to perform a song that so many people regarded so fondly. The end of the song was met with thunderous applause, so much so that they took the stage for an encore: a hauntingly beautiful version of “Silent Night.”

Roxanne Layton (percussion, recorder) stood out on several numbers, but her work on the penny whistle was particularly accomplished in “We Three Kings.” She took some time early in the show to introduce the rest of the group. Becky Kia Mills did amazingly both with her violin, as well as acting as the conductor of the group. She did particularly well in “Hallelujah” and in the lovely encore. Jed Moss (piano, synthesizer) excelled particularly in the rocking Christmas tunes and his synth skills helped to make “Toccata” one of my favorites of the night. His piano work was also lovely in the encore, starting it off with a pure, simple tone. Andrew Malashock also excelled in the rocking numbers, and shared a comic moment with Kia Mills when she almost hit him with her violin bow when they tried to jam back to back during “Hallelujah.” They shared a quick laugh as they continued the song. Edward Berry played both the harpsichord and the synthesizer, and he particularly shone during “O Holy Night,” playing a sweet harpsichord solo.  Finally, Logan Penington rocked the drums, especially on their version of the song from the Nutcracker, and his amazing solo at the end of “Carol of the Bells.”

The video and light work helped to make the performance even more fun. Two of this reviewer’s favorites were the snowflake video that accompanied “Hark! The Herald Angel Sing” and the video then played with “The Little Drummer Boy.” In this video, it showed some toys coming to life and dancing after the very hard-working elves went home for the day. The lights were of the highest quality and changed color to suit the song, and made for a dynamic performance. The group was joined by several other musicians who helped to fill out the sound, which really gave the music a well-rounded effect. They also put up dark drapes over the stage, to make the colors stand out even more. Overall, the performance was incredibly enjoyable and was the perfect kick-off to a joyful holiday season.

Running Time: Approximately 2 hours and 5 minutes, with a 20-minute intermission.

While Mannheim Steamroller has rolled on, you can see their performance schedule here.

Strathmore also has a large number of holiday-themed performances coming up, both at the Music Center, and the more intimate Mansion venue. You can find more information on these performances here.