Concert Review: ‘The Beach Boys: Reason for the Season Christmas Tour’ at Strathmore 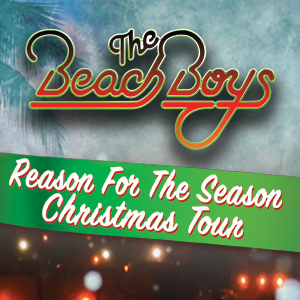 Fifty-seven years after their debut single, The Beach Boys are back! Though the original lineup of the Wilson brothers, Al Jardine, and Mike Love saw losses due to cancer, accidents, and mental health issues, Love still performs under The Beach Boys brand. At his December 10th 2018 concert, Love was joined by other talented musicians Bruce Johnston, Jeffrey Foskett, Tim Bonhomme, John Cowsill, Randy Leago, Keith Hubacher, Scott Totten, and his son Christian Love. They performed the Beach Boys classics as well as some of Mike Love’s newer music, including singles from his 2018 album Reason for the Season.

…the Strathmore Music Center’s excellent acoustics and beautiful blonde wood provided the perfect location for this trip down memory lane.

The band was introduced at the Strathmore Music Center with video footage of the Beach Boys craze in the 1960’s: screaming girls, sandy shores, and hit after vinyl hit. As someone who wouldn’t be born for another three decades, I was surprised by how nostalgic it all felt. While I was captivated by this time warp, all the septuagenarians in the audience were suddenly on their feet dancing to “Do It Again.” Love addressed this age gap humorously, joking that after four songs he’d “like to take an intermission followed by a nap” and later providing the younger audience members with “a music education moment” where he explained the concept of an LP.

In addition to Love’s banter, songs like “Good Vibrations,” “Fun Fun Fun,” and a call-and-response “Help Me Rhonda” were obvious crowd pleasers. Though the iconic falsetto was often overpowered by the instruments, Cowsill’s incredible drumming and Leago’s saxophone and woodwind skill ease the loss. However, the most interesting moments of the concert were the planned surprises. Christian Love performed a moving cover of “God Only Knows” as a tribute to Carl Wilson who died from lung cancer in 1998. During “Surfer Girl” the band asked the audience to join in the modern equivalent of a concert lighter wave using their cellphone flashlights. As the audience waved their cellphones back and forth, the reflections on the ceiling resembled ocean waves.

Although the classics were a huge hit, with most of the audience on their feet for the entire second half of the show, the band faltered when they played Love’s newer music. Missing the harmonies and themes that have come to be associated with The Beach Boys, new songs like the title track for Reason for the Season fell flat. Yet regardless of his less appealing songs, Love still had great control of the concert hall. His use of old footage of George Harrison on the Ganges for example, kept everyone’s attention, even if the corresponding song “Pisces Brothers” could have been more appealing.

Overall, the concert was a great time. From the poinsettias and Christmas trees to the projected ornaments bouncing around the walls like beach balls, the event blended the holidays with the beach in true Beach Boys fashion. Additionally, the Strathmore Music Center’s excellent acoustics and beautiful blonde wood provided the perfect location for this trip down memory lane.

Although The Beach Boys’ Reason for the Season Christmas Tour has moved on to other locations, the group has upcoming performances listed through August 2, 2019. The Strathmore Music Center also has upcoming events including different iterations of “The Nutcracker” and National Philharmonic’s performance of Handel’s “Messiah.”

Running Time: 140 minutes with an intermission.

More Beach Boys tour dates and locations can be found here. The Strathmore Music Center at 5301 Tuckerman Lane North Bethesda, MD 20852 lists their upcoming events on their website. More information is available by calling their ticket office at (301)581-5100.