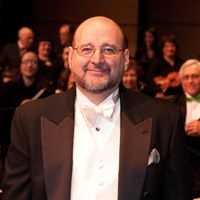 Nothing is as certain in the arts as change.

Born near the banks of the Susquehanna River (in Harrisburg, Pa.), Sheldon Bair started out playing drums and bass.

“By my senior year in high school, I was composing and arranging music for bands and church choirs.”

Bair then honed his musical skills, getting his degree from Elizabethtown College in central Pennsylvania.

Mr. Bair then relocated to Harford County Maryland, where he taught middle and high school orchestras for 40 years. Mr Bair has most recently been inducted into the Harford County Educators’ Hall of Fame. “It is a big honor.”

Coming to Harford County was an unexpected boon.

“I came in through the back door, with the right people to help me,” said Bair.

What hasn’t changed is its mission: as a nonprofit community orchestra serving Harford County and providing opportunities for local musicians to “perform challenging classical repertoire,” said its music director.

The orchestra is comprised of 85 all-volunteer musicians, some amateur and some professional. More than 700 County residents have played with the orchestra since it inception.

“As a community orchestra, the talent we have is diverse,” said Bair.

SSO presents a four-concert subscription season in addition to one or two “pop” al fresco or benefit events. Indoors, the orchestra performs in Bel Air High School — which offers “good acoustics and a space for a little over 800 people,” he added.

For example, Manfred Reek, principal second violinist for the orchestra since 1991, once turned down a job opportunity because it required his working on Tuesday nights.

That’s when SSO rehearses, and for Reek, a time commitment that’s “etched in stone.”

Reek took private violin lessons as a kid, studying for a time with William Martin, assistant concertmaster of the Baltimore Symphony Orchestra. He majored in music at Towson College — but not in violin.

“I had actually stopped playing violin in my senior year of high school,” Reek said.

Before that, however, he was in the Maryland Youth Symphony, playing the same position he does now with SSO. Reek also played in a jazz ensemble.

Though he considered a career in music, Reek “didn’t feel confident enough.”  Instead, he pursued an electronics degree and became both a computer tech and engineer.

After a long hiatus, Reek picked up violin again after meeting Bair’s wife, Barbara, in a choir.

If nothing else, Reek said, “I wanted to get my young son motivated to play by seeing his father play.”

Now, in SSO since 1991, he finds playing with the orchestra”absolutely satisfying”.  “Anything I do has to revolve around the orchestra schedule.”

Some people have been in the orchestra for 40 years.

The Susquehanna Symphony isn’t the only institution Bair created.  In 1999 he succesfully launched a youth orchestra.

In addition to SSO’s outdoor concerts there are four indoor concerts a year at Bel Air High School. The orchestra also plays at special events and weddings.

The town of Bel Air has recently added $1.5 million to the HCPS building  budget for Bel Air HS to have a fine auditorium with good acoustics.

Although essentially a purveyor of classical music, the orchestra also does a lot of new music — especially at its outdoor June concert.

“But people know what I choose won’t scare people away.” “It’s easy, nonthreatening.”

One of SSO’s favorite contemporary composers is Sir Malcolm Arnold of England, who composed the music for the film “Bridge over the River Kwai.” Other composers we have performed (and have been our guests) include Gwyneth Walker, Benny Russell, Ray Horton, Daniel Dorff, James lee III, Amanda Harberg, and Kile Smith, to name few.

The orchestra is “always looking” for more volunteer musicians as well as ushers, box office (you write tickets) etc.

The SSO is considered a very important part of the community. “We have a partnership with Coffee Coffee who created and sold a special latte in our honor for one month this fall. The latte was called Handel’s Harvest.  The orchestra also gave a free concert that included opioid Addiction Awareness.  Education about opioid Addiction is key to helping eradicate this awful scourge.

One of Bair’s sources of non-musical pride is that he’s included in author Skip Prichard’s “Book of Mistakes” which was just named to forbes list of best Christmas presents for business people.  Skip is a former student and CEO of OCLC which all librarians know.

Musically, he’s grateful not only for the orchestra he leads but for “being in the right place at the right time, and everything falling into place. I’m lucky to be in Harford County.”