Opera Review: ‘Operetta Wonderland: The Magic of Victor Herbert’ at The In Series 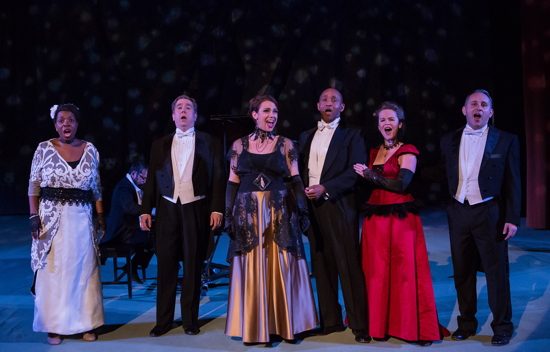 The cast of ‘Operetta Wonderland: The Magic of Victor Herbert.’ Photo by Angelisa Gillyard.

The music of Victor Herbert has lasted generations, whether people recognize his name or not. Although Irish by birth, he set the standard for American Operetta. With the proficiency and nuance of his European counterparts, many of his peers felt that he was squandering his talent on such a frivolous genre. He combined popular styles of music and created the gateway that led to American Musical Theatre.

It is a delightful experience for Herbert fans and novices alike…

“Operetta Wonderland” is a celebration of Herbert’s music, with a series of vignettes accompanied by some of his most delightful pieces. Six talented singers, no plot, and dazzling costumes create a charming evening of music that transports the audience to another era.

Gonzalez has a smooth and sultry voice which opened the show with probably Herbert’s most famous piece “Toyland” from ‘Babes in Toyland.’ She continuously demonstrated wild versatility and great personality. Her humor balanced with more sad and tender moments such as “A Kiss in the Dark” from ‘Orange Blossoms.’

Adelsberger’s sweet baritone and knack from comedy made him a vibrant force on stage. His performance of “Every Day is Ladies Day With Me” from ‘The Red Mill’ with the assistance of the ensemble was truly delightful.

With a creamy tenor and outrageous expressions, Haughton brought life to “Love me, Love my Dog” from ‘Mlle. Modiste.’ He added a wiry energy to his performances that made the me smile every time.

Curtin’s bright and soaring soprano rang out on “The Italian Street Song” and “A Perfect Day.” Her sassy personality brought her characters to life. Jenkins brought vibrant energy to the stage that both captured joy and sorrow. Jackson’s booming baritone and micro-expressions always felt like he had a secret to share and left the audience desperate to know.

This production, directed by Brian J. Shaw,  is full of joy and wonder. It is a delightful experience for Herbert fans and novices alike and a charming kick-off to the season of wintry festive music.

‘Operetta Wonderland: The Magic of Victor Herbert’ by The In Series runs at the Scottish Rite Temple until Dec 2. For tickets and more information click here.