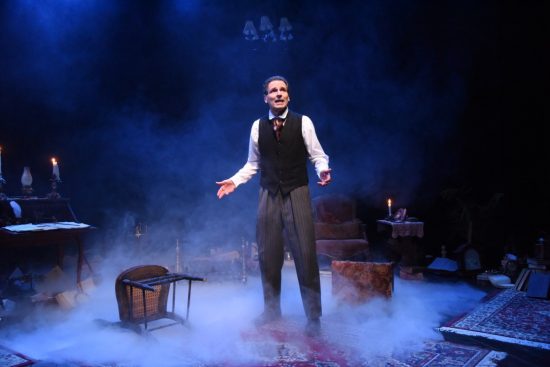 When I think of the holiday classic “A Christmas Carol,” I can’t help but think of the coined phrase Bah, Humbug! –or the Robert Zemeckis film starring Jim Carrey and Gary Oldman. Bill Murray in the adaptation “Scrooged” also comes to mind, but these are far cries from the original rendition of this tale. As much of a Charles Dickens fan as I have been most of my life, watching Paul Morella single-handedly narrate and perform “A Christmas Carol” at the Olney Theatre Center made me slip into a deep sense of awe of what the “ghost of Christmas past” truly means and what Dickens originally envisioned for the audiences of this profound anecdote.

The performance at Olney Theatre is adapted from the original novella, which features Morella in a one-person show filled with ambiance, as well as sound and visual effects to complement an already powerful story. Morella deserves high praise, for he not only renders a magnificent narrative performance, but he also wears nearly every hat in the production –including the voices of all the characters. Morella expressed to the audience he models his act after Dickens himself, who traveled on both sides of the Atlantic performing “A Christmas Carol” in a manner one might expect when sitting around a fireplace telling a haunting story. Certainly, he achieves this, as the stage for this performance is in close proximity to the audience. It was an eerie and intimate setting which made for an amazing evening. I was impressed with the set, the old Victorian aesthetics, the spooky dark room and Morella’s character plasticity –as this was quite a unique performance.

Dickens, his Victorian readers, and Morella himself would probably concur emulating someone as ill-tempered as Ebenezer Scrooge would be social and moral suicide. He is the embodiment of a modern-day goblin –an irritable, sullen, vitriol, emotional desert. But this story, at its core, is about redemption, rebirth and renewal.  As Morella says of Dickens’s narrative in the program notes, “His story is one of conversion and transformation; of one man’s journey from the loneliness of his own dark prison into the liberating light of our common humanity.” It may sound like hyperbole, but I truly believe Dickens would approve of Morella’s adaptation.

As mentioned before, Paul Morella is a one-man operation. He carries the entire show on his shoulders, but his character has help delivering some magic in his dramatic recital. The wonderful atmosphere of the stage is the rendering of artistic director Jason Loewith and lighting designer Sonya Dowhaluk –as well as projection designer Patrick Lord. Stellar sound designer Ryan Gravett runs the audio mixing, which is absolutely superb. Costume designer Seth Gilbert ensures Morella looks the part of a 19th-century story-teller (the top hat was a nice touch). Their experience and resumes are too lengthy to mention, but their collaboration magnificently culminates into the endearing fable we’re all familiar with.

This traditional allegory is filled with the elements of the human experience in all its bright humor and heavy darkness. Olney Theatre has a real gem in “A Christmas Carol.” Morell states his intention with this show is “to let the pulse of this wonderful story unfold as Dickens originally envisioned.” Well, in my opinion, the authenticity of the writer’s original intent pierced through quite clearly. The performance I experienced was something as close to Charles Dickens himself smiling and whispering his own famous lines from the twilight, “I will honor Christmas in my heart, and try to keep it all the year. I will live in the Past, the Present, and the Future. The Spirits of all Three shall strive within me.’’

Go for the genuine Dickens experience. Go for the spirit of Christmas. Go because the ghost of Ebenezer Scrooge will depart from this stage before the New Year.

“A Christmas Carol” is playing now through December 30, 2018, at the Olney Theatre Center –Mulitz-Gudelsky Theatre Lab. For more information and to purchase tickets, visit their website by clicking here.