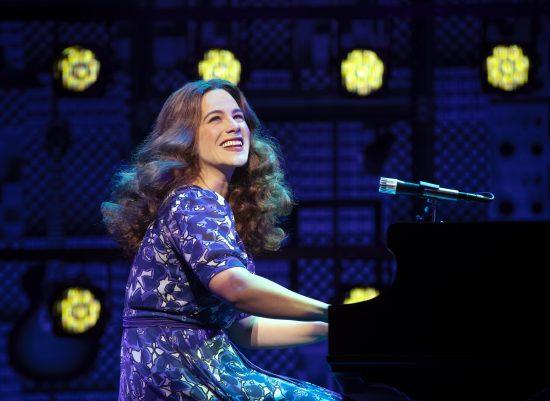 No matter what generation you grew up in, you are most likely familiar with many of the timeless tunes performed in “Beautiful – The Carole King Musical” now on stage at the National Theatre in Washington, D.C. Whether it’s a gorgeous cover by Amy Winehouse, or another pop hit playing on the radio or up on the big screen, the moving music by the multi-talented, award-winning singer and songwriter endures and stirs emotions to this day.

Similar to a musical composition, ‘Beautiful’ captures the complicated highs and lows that King experiences, only to build before she finally reaches a breakthrough and receives much deserved critical acclaim.

Directed by Marc Bruni with a book by Douglas McGrath, “Beautiful” tells the inspiring story of a Carole Klein, now King, a driven, talented girl with a gentle soul from Brooklyn who goes on to write for some of the biggest acts in the music business before becoming a world-renowned superstar in her own right. The poignant production is a touching tribute to King’s life’s work and the life that fueled the inspiration for that work including “So Far Away,” “You’ve Got a Friend” and “(You Make Me Feel Like) A Natural Woman,” among others.

Watching “Beautiful” is seeing music history unfold with awesome throwbacks to the late fifties and early sixties that includes the energetic mash-up “1650 Broadway” performed by the talented ensemble.

Portraying Carole King, Sarah Bockel is phenomenal from the moment she appears as an endearing teen trying to sell her first song “It Might As Well Rain Until September” all the way to her solo show at Carnegie Hall years later. At King’s side is Gerry Goffin, her co-lyricist, lover, troubled husband, and father of her two children portrayed by a dynamic Dylan S. Wallach. Although the relationship is bittersweet, their collaboration produces a bevy of Billboard smashes such as “Some Kind of Wonderful” performed by the pair and written for the dapper group The Drifters and the classic “Will You Love Me Tomorrow” for The Shirelles—both dreamy numbers stand out with vivid colors, smooth moves and vibrant vocals to match. Credit the creative team of Derek McLane (scenic design), Alejo Vietti (costume design) and Peter Kaczorowski (lighting design) for the polished look throughout the production.

Of course, there are other key figures who play prominent roles in King’s journey: overprotective but well-meaning mother Genie Klein played by a convincing Suzanne Grodner, music publisher and manager Don Kirshner played by the witty James Clow and rival songwriting couple and her best friends Barry Mann and Cynthia Weil delightfully played by Jacob Heimer who is quite entertaining and Alison Whitehurst whose bubbly and independent spirit is refreshing. The two especially shine in the lovely duet “Walking in the Rain.”

Similar to a musical composition, “Beautiful” captures the complicated highs and lows that King experiences, only to build before she finally reaches a breakthrough and receives much deserved critical acclaim.

Running Time: Approximately 2 hours and 20 minutes with one intermission.