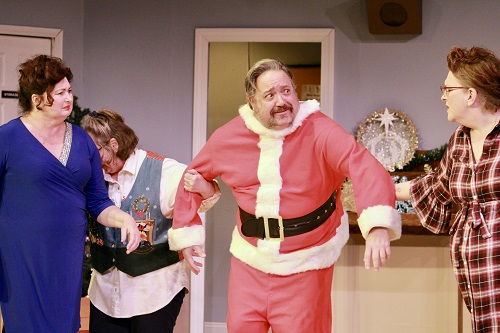 Honey Raye (Dawn Weber, left) tries to get a handle on the Christmas Pageant as Dub Dubberly (Paul Rose) is being pulled in different directions by Frankie (Laura Hinkle) and Geneva (Linda Lagle). Photo by Rachael Leissner

Christmas is a time of year where people are pushed, by social expectations and holiday celebrations, to embrace and celebrate the craziness of family. No matter where you are from or what holiday you celebrate, this time of year seems to bring out the strength and love of familial bonds, along with plenty of insanity, stress, and yuletide comedy. Newtowne Players’ production of “Christmas Belles” captures exactly that!

Clearly, Jones Hope Wooten had a family exactly like mine when looking for the inspiration behind “Christmas Belles.” I mean, I’ve definitely had a few Christmases like the one that the Futrelle family has in Pharoah, Texas. The story begins with a Christmas Pageant, which Honey Rae Futrelle is directing instead of seasoned director Geneva Musgrave (who is NOT happy about it). We’re then introduced to a whole host of other characters: Twink Futrelle (the jailbird), Frankie Futrelle Dubberly (the VERY pregnant peacekeeper), and Dub Dubberly (the stinky Santa with undiagnosed back pain), just to name a few.

Throw in every possible problem a Christmas program can face, right down to a biting sheep, a reindeer who wants to marry Mary, and a pancake pandemic, and you haven’t even begun to describe the insanity that “Christmas Belles” contains. Of course, at the heart of this Christmas comedy is the true meaning of Christmas: the ultimate sacrifice of love and the birth that redefined the meaning of family.

Director Beth Sanford hit on a gold mine with this production! The cast is wonderful and never stepped out of character. The comedic timing of this ensemble was on point, and everything flowed perfectly together (which can be very difficult in a comedic show such as this one). The voiceovers used prior to the show and during scene changes, were my favorite part of the show! I don’t know if they were written in the script or developed by the cast/crew, but they were genius! I was really impressed with the smoothness of the lighting/sound cues and the set transitions. Thanks to lighting designer Nick Ashenfelter, sound designer JayMcKulka, stage manager Kathryn Teague, and all of their crew for doing such a great job! The costumes were so fun, and I loved the yuletide hairdos. Sandra Bradley (hair/makeup designer) and Millie Coryer-Due (costume designer) definitely deserve a pat on the back for their creativity! The set was simple, functional, and very realistic, thanks to set designer Jeff Maher and crew. Kudos to all of the crew for their hard work!

I cannot say enough good things about this cast! Everyone was very talented and absolutely captivating! I haven’t laughed that hard in a long time, and it felt so good to empathize with the cast through laughter and tears. I simply adored the characters of Raynerd Chism (played delightfully by Patrick Shoenberger), Patsy Price (portrayed perfectly by Robin Finnacom), Frankie Futrelle Dubberly (played brilliantly by Laura Hinkle), and Rhonda Lynn (played hilariously by Joanne Fuesel). Truth be told, the entire cast was incredible. Dub Dubberly (played perfectly by Paul Rose) deserves an award for the level of pain he manages to carry with him the entire show – I really felt for him. This is one show I would happily go and see every performance.

This is a must see show this holiday season. Take your friends, your family, your friends’ family, your neighbors, even the strangers off of the street. Newtowne Players’ production of “Christmas Belles” will leave you in stitches. You will not be disappointed! So “Happy Holidays,” enjoy the show and, for future reference, don’t eat brownies given to you by talking reindeer. The jalapeño fritters are a better choice, but get them before Frankie does!

Advisory: Some sexual innuendos. There will be moments of giggling, followed by the possibility of loud guffaws, and then the true insanity will kick in. You may leave this theatre feeling uplifted, even ecstatic, and may not be able to stop yourself from telling everyone you pass “I just love Christmas”.

“Christmas Belles” will be playing at Newtowne Players in Lexington Park, MD until December 16, 2018. For more information, or to purchase tickets, please see here.