Theatre Review: ‘How to Keep an Alien’ at Solas Nua 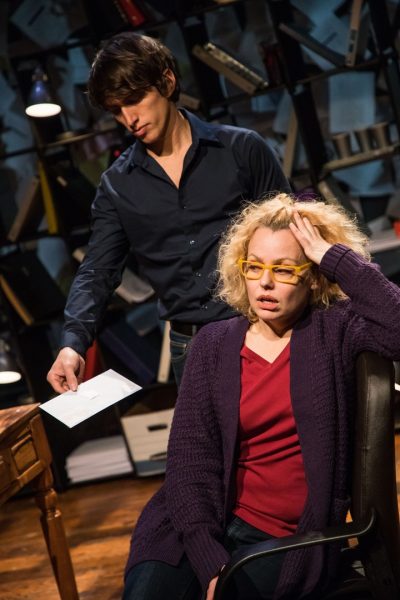 Nick Fruit and Tonya Beckman in ‘How to Keep an Alien,’ through December 16, 2018. Photo by DJ Corey Photography.

Let me get my two complaints about this show out of the way immediately—it’s not ADA accessible, and it’s way too short. This was the best 70 minutes I have spent in a long time.

Let me repeat that—the best 70 minutes I have spent in a long time. This production of Sonya Kelly’s somewhat autobiographical play on finding and committing to love in a red-tape world is joyous, heartbreaking, insanely funny, witty, and a flurry of words that conjure up so many images, that you simply need more. In fact, as we were clapping, I was thinking this needs to be a series.

This was the best 70 minutes I have spent in a long time.

An Irish actor meets an Australian stage manager working on a Russian play using English accents in Ireland. They slowly click through rehearsals, then fall in love. The play is about the next two years of trying to get Aussie stage manager Kate the Irish equivalent of a green card. It’s also about committing to huge changes, facing and working through fears, and how hard our bureaucratic world makes immigration. Because not only is it hard to prove you’re a real, committee couple (still not sure how taxi receipts do that), but if you’re not “highly skilled” enough to make a lot of money and pay a lot of taxes, they really don’t want too many of you. And as the characters point out, few go into live theatre for the large pots of money waiting.

But while the underlying themes are serious, they are detailed so deftly and so hilariously rolled out you get the point without being smacked over the head with earnestness. Granted, this story is about two white women from developed countries trying to find a way to just have their relationship and live however happily or unhappily ever afterwards; the glimpse of the hoops they are forced to jump through makes you ache for the immigrants without their privilege who are trying to find home in a cold world.

And this just isn’t a clichéd story about two women falling in love and having to prove it to the government; there is nary a mention of words such as gay or lesbian or queer. The fact that it is two women doesn’t even really register—they are first and foremost two people in love.

The brilliant Tonya Beckman plays Sonya, the playwright. She enacts the story that Sonya Kelly tells us as the Irish actor, so we see everything from her viewpoint. But even from Sonya’s viewpoint, her girlfriend Kate comes across as a real human being—invested in her job, smart, not a pushover, playful, in love. And as Sonya, Beckman gives a performance that is so alive and so very human that you root for her. Sometimes she’s a mess and at others so strong it takes your breath away. As she so deftly did in the recent Pramkicker, Beckman gives a performance that leaves you falling a little bit in love with the characters.

Nick Fruit plays Justine and almost all the other characters; he’s a revelation. With cheekbones to die for and a lovely singing voice, he is Beckman’s match in portraying the zaniness that pretty much underscores so much of life. He brings to each character their own nuances and you can just picture these people in your head.

The play is directed nearly flawlessly by Tom Story. The suppleness and poetry of the language demand a fast pace and he does not disappoint. But nothing is lost in the compactness of the story—a tribute to both the playwright and to his directing. He makes full inventive use of some really funny touches that might come off as cloying in less adept hands, but here work as on-going jokes. One example is that the beautifully designed paper airplanes that stand in for every trip to see each other these two fierce women make is a just deranged-enough touch to have you collapsing in laughter. Every single time. They may be on a wire to fly so perfectly across the length of the stage, but we can’t really see the wire and it’s just plain funny (yes, I went there).

This play is heartwarming without being treacly, a paean to love without being smarmy, and wicked smart in its use of language. Solas Nua is Irish for “new light,” and if this is indicative of the work they produce, they need to produce a lot more. This production is the perfect antidote to joylessness and stress, and I just may have to go see it a second time to keep that stress from piling on and to get my joy on.