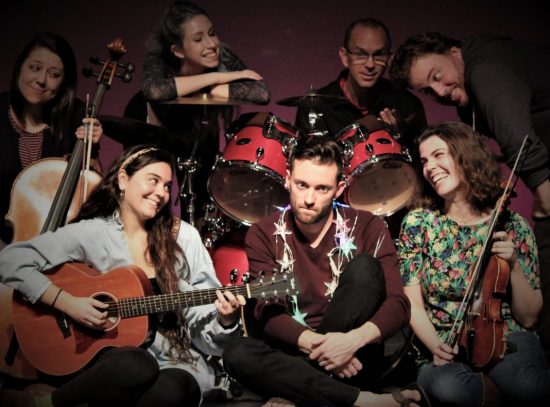 The cast of the Free Range Humans production of ‘Striking 12.’ Photo by Elizabeth Lucas.

“Striking 12” presented by Free Range Humans is helping to ring in the holidays at the BlackRock Center for the Arts in Germantown, Maryland.  “Striking 12” is an offbeat musical with music and Lyrics by Brendan Milburn, Valerie Vigoda and Rachel Sheinkin with book by Milburn and Vigoda.  It contains a little rock, a little jazz, a little rap and a little classical in its score.  This production is directed by Elizabeth Lucas.

The unusual part of this production is that the musicians not only play their instruments, they also sing and act.  The cast is so uniformly talented that they slip into their different creative roles without awkwardness.  Under Lucas’ direction, they sing and play into our hearts.

The plot is complex.  The Man Who Has Had Enough (Alan Naylor) is working late on the last day of the year.  New Year’s Eve party invitations come as he arrives home to confront his lonely apartment and memories of a recent romance that has ended.  As he crawls onto his couch to begin his solo New Year’s Eve, the doorbell rings.  It is an attractive young woman (Robin Weiner) selling lights to treat Seasonal Affective Disorder.   Naylor’s character is attracted to the saleswoman who also seems to have a reason to be glum but yet, seems inexplicably upbeat while she sells strings of lights on the last day of the year.

The young woman tells our hero that she is often compared to “The Little Match Girl” in the Hans Christian Anderson story.  She leaves and the Man pulls out his copy of the story.  At that point the young woman becomes “The Little Match Girl,” and the rest of the cast assumes various roles in the story.  Most of the story is done through song, as is a great deal of the plot and character development. It is like a modern opera or operetta.  After the story is told the Man is brought back to the present where he feels great sadness for the poor child in the story.

However, don’t think this is a sad tale.  Milburn, Vigoda and Sheinkin manage to put humor in just when we are almost brought to tears.  For instance, the cast sings “Give the Drummer some Lovin’” suggesting that member of the supporting cast are not happy being assigned to the smaller roles.  They often break the fourth wall to talk to the audience or each other. Yet, the cast never loses the tenderness of the tale.

Naylor’s portrayal of The Man Who Has Had Enough is vibrant which is hard to pull off while the character is being morose.  From “Thank You Very Much and You’re Welcome” which introduces the character to the acerbic “Fine, Fine, Fine”  Naylor helps expose why New Years can be the unhappiest time of year.

Weiner’s performance is remarkable on several levels.  She opens the show with a violin solo and plays a wonderful violin even while she sings.  Her voice is also sweet as the young woman and sad as she switches to play the child in “The Little Match Girl.”  I was very moved with “Snow Song” at the beginning of the show and which reprises later in a duet with Naylor as the show closes.  Weiner’s and Naylor’s first meeting is bright and full of laughs as they sing, “The Sales Pitch.”

The rest of this very talented cast includes Lauren Farnell on Guitar and as Narrator 2, Paige Austin Rammelkamp on the keyboard and as Narrator 1, Michael Reid as Foley Guy and Jeff, Natalie Spehar on cello and as Grandma, Space-Invading Girl and others and Kevin Uleck on drums and as Post-Nasal Drip Guy and others.  This ensemble is more than just a backup group. Their characters move the plot and create much of the comic relief.  Their finest and funniest moments are in the numbers, “Give the Drummer some Lovin’” and “Screwed Up People Make Great Art,” recognizing that Anderson and many other artistic geniuses were often a little crazy and came from dysfunctional families.

The adorable Caia Lucas and her twin, Maeve Lucas, alternate as “The Little Match Girl” at the end of the play within a play.

Again, Lucas with very little set brings the stories of The Man Who has had Enough and the Little Match Girl to life in this blending of past and present.  Marci Shegogue is the Music Director and also is responsible for this mixture of hope and sadness coming together musically with wonderful musical arrangements and fine vocals.

The lights were designed by TJ Lukacsina.  He uses strings of lights as a valance across the curtain at various times, but most artistically during the retelling of the fairy tale.  Along with Sarah Blocher, Scenic Artist, they use a cleverly lit weeping willow to help tell Anderson’s story as well as a “flame” that is suspended from the ceiling center stage.   Brent Tomchik’s sound design let me hear every word and yet still appreciate the instruments as they played behind the lyrics or in their own solos.

Get yourself to Germantown to see this diamond production at BlackRock Center for the Arts.  As we say goodbye to the good and bad times of 2018, 2019 will seem a little bit more hopeful after seeing “Striking 12.”

Running Time: One hour and 30 minutes. No Intermission.