Theatre Review: ‘The Accident Bear’ at The Avenue Laundromat 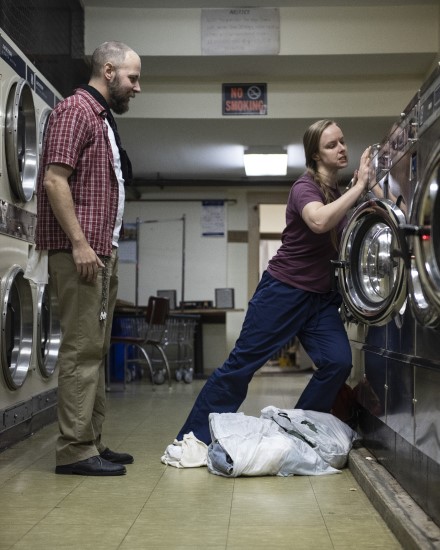 Paul Diem and Rachel Manteuffel as Bear and Chance.

“The Accidental Bear” is presently playing at The Avenue Laundromat in Annapolis, Maryland.  This intriguing original romantic comedy was written by local playwright Bob Bartlett and directed by Jay Brock.  Using the Laundromat as a theatre is unusual, but not without precedent. From the Greeks congregating on hilltops to medieval troupes who performed from the back of wagons to the concept of the whole theatre developed in the 1970s by Polish director Jerzy Grotowski, who thought the actual theatre should become part of the set, thespians have performed for audiences in many unique settings.

The plot itself revolves around Bear (a human, not a real bear or someone dressed as a bear).  Bear (Paul Diem) owns a laundromat but is very accident prone. He has one major accident per month and not just small ones. These involve broken limbs, dozens of stitches and pain. Into the laundromat literally falls Chance (Rachel Manteuffel), an attractive young female who is in desperate need of using the machines after closing. She has been living out of her car for three weeks. At first, Bear agrees but seems to develop cold feet very suddenly. Without spoiling the story for you let me just say think about the movies Ground Hog Day or Memento where layers of the story unfold through in repeating segments.  Also, part of the comedy is Buddy (Louis E. Davis), Bear’s friend, who waxes philosophical about Bear’s problems while hiding from his own demons.

Catch this production if you like a romantic comedy, creative theatre and great performances.

Bartlett states the idea to write the story in the Laundromat came from a challenge.  This is the first play, however, that he has written where the performance is at the place it was set. The scenery is the washers, dryers and vending machines.  The actors are almost in your lap. You can smell the lint in the air. You feel the cold air sweep in on the entrances and exits. It has an extremely riveting effect.

Each scene, with one exception, is introduced by the late Sam Cook’s song, “Nothing Can Change This Love.”  This allows us without lights or curtains to know that we are changing scenes. We think we know what’s coming, but do we? As Bear says, “We remember things differently each time we remember.”

In a three-character play, the success of the production is in the hands of the actors’ ability, and these three are so talented that they never lose character or the fourth wall as they stand or fall in immediate proximity to the audience or as they make exits and entrances to and from the street. Diem’s Bear is touching, yet still humorous as the ne’er do well owner of the business waiting for the next axe to fall in his stream of accidents. In the opening scene, he seems to be mean to Chance, but Diem through his eyes and facial expressions lets the audience know that there is more to this anger than meets the eye.

Manteuffel as Chance captures the characters plight and confusion.  Manteuffel helps us understand her attraction to Bear and her guilt for those feelings. It is also a taxing physical role and she “falls” into that part gracefully. Her final scene where she has to confront their relationship face her own history is very moving.

Louis E. Davis plays Buddy, Bear’s best, and perhaps only, friend. At first, we think he is a bit of a wise-guy, more into himself than his friend, but later Davis peels off some of Buddy’s facade to create a caring friend and a man who is willing to be supportive to the people for whom he cares about the most. Davis, like his two partners, has great comic timing, especially the scene where he does yoga on the washers.

Brock’s direction makes the most of this limited space. The actors sit on machines, climb on chairs, lie on floors which help creates multi-dimensional visions to the production. Every space that can be seen by the audience is used well. He allows his actors to develop realistic characters in this fantastical story.

“The Accident Bear” plays to a very limited audience (about a dozen or so per performance).  Catch this production if you like a romantic comedy, creative theatre and great performances.  Don’t bring your dirty laundry to wash, you won’t want to miss any of the action.

Running time: One hour and 20 minutes.  No intermission.